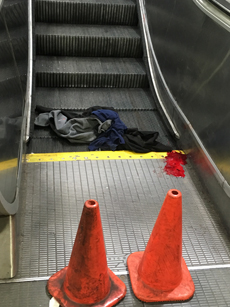 An escalator incident Sunday evening left a man with a large cut to the head.

A man tumbled down the escalator at the Davis Square red line T stop just before 8:14 p.m. Sunday, sustaining injuries that left a small pool of blood at the base. The man was taken to an area hospital, according to scanner reports.

Clothing lay at the bottom of the escalator by the blood, apparently sucked in to the machinery where the man landed.

The Cataldo Ambulance Service, which transported the man, could not release any information, a dispatcher said.

It’s not the first time a Davis Square escalator ride became dangerous, with the more common problem being clothing sucked in to the machinery. In February 2015, the leg of a commuter’s pants were sucked in but the man escaped injury, MBTA spokesman Joe Pesaturo told the Boston Herald at the time. In September 2008, it was a shoe, prompting reminiscences from members of the Davis Square LiveJournal page, including this one:

My foot was actually sucked into the down escalator … the guy behind me actually had to rip my foot out of it, and when he did I honestly thought I was not going to have a toe. The nail came completely off and my actual nail bed underneath was gashed to the point where it needed stitches. All the bones in the top part of my big toe were shattered like confetti.

It actually never stopped. People just kept piling down on top of me. And the thing kept rolling so it kept sucking my foot in further and further so that my toe literally got stretched out a couple of inches when it broke. And everyone around me was in such a state of panic that they didn’t think (nor did I) to hit the stop button which was about two feet away from where I was laying screaming.