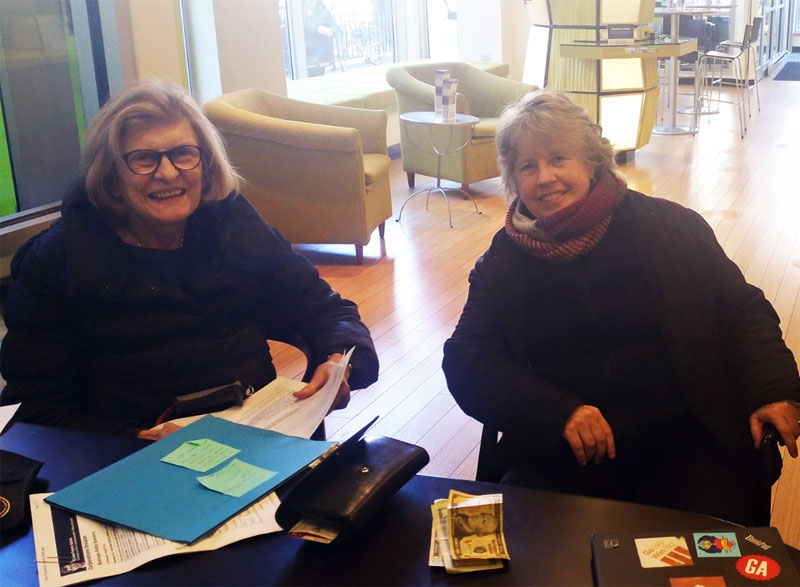 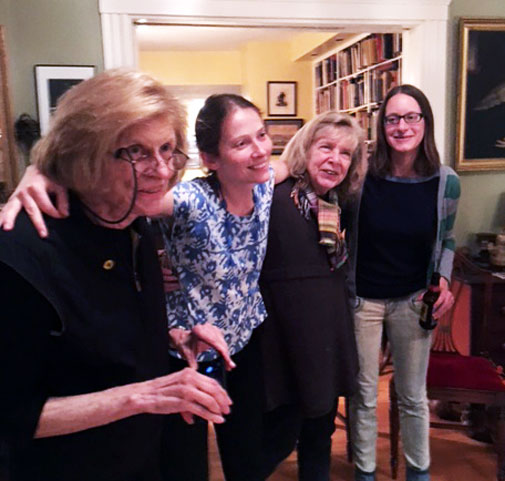 The Harvard Square Defense Fund is back – rebranded.

The citizens group had some powerhouse years after its founding in 1979 by Gladys “Pebble” Gifford – blocking fast food franchises, sending the John F. Kennedy Presidential Library and Museum off to Boston and reshaping Harvard’s Carpenter Center for the Visual Arts – but has been dormant for years, even as people griped that the quaint square was losing its charm amid an infestation of banks and chain retailers. Believing the fund dissolved as far back as 2008, when Gifford gave testimony against the coming of The Sinclair nightclub in 2011, she did so as just a neighbor.

“The directors all got elderly or died. We thought we’d officially put it to bed,” Gifford said of her organization.

But when the city announced a $4.6 million plan to revamp the square’s 89-year-old Out of Town News kiosk and surrounding plaza, activists worried the alterations would nullify its classic charm and iconic features.

Members of the group Our Harvard Square began calling for the structure – already on the list of the National Register of Historic Places – to be designated as a landmark by the Cambridge Historic Commission in hopes it would further ensure its preservation. Members include Suzanne Blier, a Harvard architectural historian, and Susan Labandibar, president of Tech Networks of Boston, as well as architect Caroline James, corporate analyst Abhishek Syal and activist James Williamson.

They had no sooner begun rallying around the kiosk when other projects around the square drew their attention, including developer plans for a large office and retail complex that would replace buildings and businesses such as the Abbot building and its equally iconic tenant, the World’s Only Curious George Store; a chain called &pizza seeking to fill space across the street formerly occupied by the Tory Row restaurant and Crimson Corner newsstand; and the ongoing effort to bring screenings back to the shuttered Harvard Square Theatre on Church Street.

Blier, Labandibar and Gifford say they have joined forces, rebranding the Harvard Square Defense Fund formally as the Harvard Square Neighborhood Association. It was a natural evolution – Blier said the first meeting of Our Harvard Square was held at Gifford’s house. And now the group has filed to become a 501(c)(3) nonprofit, inheriting the Fund’s status, Gifford said.

The structure is a bit more complicated: Blier said Our Harvard Square will continue as a select committee within the Harvard Square Neighborhood Association, which will be open to all. “The claim is that everybody owns Harvard Square, and this allows us to bring in everyone’s energy and creativity and passion,” Blier said. 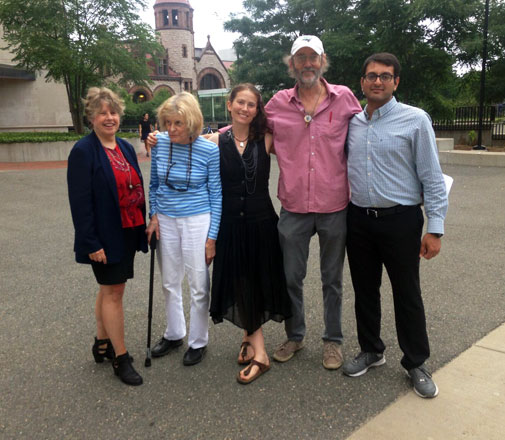 Though a resident of Harvard Square dating back to 1993, Blier said she’d been too busy with family and career to become a member of the Defense Fund. “I knew it was a a group of dynamic, tough women doing things locally,” she said. It was only after relishing a recent visit to her hometown of Burlington, Vt., followed suddenly by a student’s email alerting her to imminent changes to the kiosk, that she realized she had to fight to make the square as lively and smart as the city that nearly had convinced to move back.

“Maybe we move back up,” she recalled musing. “But then, this is Harvard Square – what was I thinking?”

Instead, she and a core group of members such as Labandibar, Our Harvard Square president Syal, James and Marilee Meyer began looking for ways to alert citizens of the changes and involve them in the issues. One effort encouraged people to fill in a sheet of paper with whatever improvements they hoped to see come to the square. 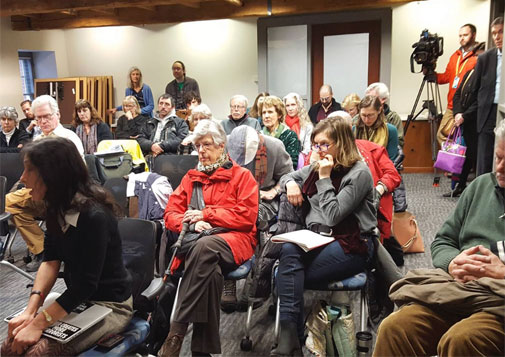 The Neighborhood Association has developed an email list of 1,470, bulked up from petition drives for projects such as the kiosk, Abbot building and cinema, Blier said, and one summer task will be figuring out how many of those are actually Harvard Square residents. Ultimately, she would like to build out the list to between 3,000 and 5,000 members.

The Defense Fund had a different approach. While its size was “amorphous” because anyone who donated money was considered a member, that figure probably peaked at 400, Gifford said, and it was led solely by a dozen or so directors.

Decades ago, that caused some bad blood. John DiGiovanni told The Harvard Crimson in 1995 that he’d donated money to the group as head of Trinity Property Management, only to find the Defense Fund’s decision-making remained opaque – not to mention arrogant and elitist. “I tried to attend their monthly meetings, but they said I couldn’t,” DiGiovanni told the Crimson. “What kind of group is it if members aren’t even allowed to sit in on board meetings?”

DiGiovanni didn’t respond to emails and a message left at Trinity Property Management for this article.

But vice mayor Marc McGovern said the contributions of Our Harvard Square had been positive. “The efforts Suzanne have led have been very collaborative. They’ve been open to different points of view and don’t approach issues defensively, but with a commitment to keeping Harvard Square a great place,” he said. “They’ve been helpful in moving this whole conversation forward.”

The combined group’s multifold mission remains the same too, Blier said: protecting the historical fabric and cultural diversity of the square, while building community and nurturing a vibrant future for “this unique place.”

What the Defense Fund funds 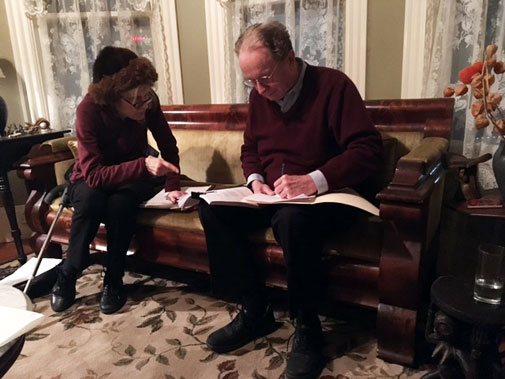 Gifford and Charles M. Sullivan, executive director of the Cambridge Historical Commission, confer during an Our Harvard Square meeting about the Abbot building at the home of Suzanne Blier. (Photo: Our Harvard Square)

Also like the Defense Fund, the Neighborhood Association is paying for legal challenges.

The Defense Fund went to court some half-dozen times over the years, spending somewhere between $100,000 and $200,000 on zoning and design battles for projects such as One Brattle Square and Charles Square and in favor of caps for liquor licenses in Harvard Square and similar areas. Some would see it as a mixed legacy, as the Crimson argued the legal costs over One Brattle forced the developer to raise rents above what mom and pop retailers could afford, and the license caps were overturned last year with a finding the city had never legally been subject to a quota, and the caps hadn’t been enforced anyway.

The Neighborhood Association was in Middlesex County Superior Court on Thursday over Abbot building issues. Blier said she was pleased by the attention given the case by Judge Christoper K. Barry-Smith, and expressed optimism that there might be a finding this month that would serve as a complement to the good outcome at the Harvard Square Theatre, where developer Gerald Chan said he would return screenings to the Church Street along with retail and office space.

While leaders have taken to attending a seemingly never-ending string of community meetings, as Gifford and older members had done since the 1970s, there are also new tasks to attend to – endless emails and the time-demanding task of social media. And Blier said she was already looking forward to the group’s June 27 meeting, where members will look at such issues as noise from Boston Calling music festivals and what will become of the nearby Episcopal Divinity School property as the school departs for New York.

“I would love this to be a muscular group, but agile, so we can really bring the voices of the neighborhood together,” Blier said, “and make it the thriving place it could be, but hasn’t been for some time.”