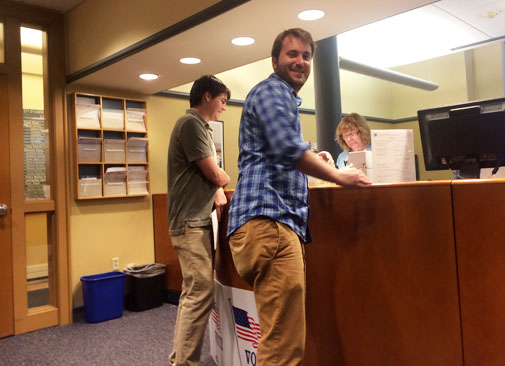 Of the 21 nomination papers taken out Monday for November elections for City Council or School Committee, only two candidates’ sets were returned the same day: those of council candidate Samuel Gebru and committee candidate Jake W. Crutchfield, who came in with less than 20 minutes to spare with half the 100 names he could file.

“Hopefully, they all stick,” Crutchfield said. 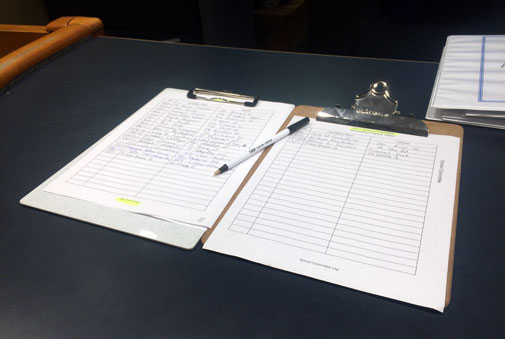 Monday was the first day nomination papers became available. The last day to submit them is July 31.

The papers taken out revealed brand-new names for the council race – Michelle Heather Lessly, a Massachusetts Institute of Technology employee, and Dan Lenke, a semi-retired Avon Hill landlord – and the intriguing fact that longtime School Committee member Richard Harding took out papers for a council run as well as for reelection.

The figures don’t represent everyone interested in running for one of the council’s nine seats or School Committee’s six seats. So far some two dozen candidates have expressed interest in a council run, including all but two incumbents, and 10 people for a seat on the School Committee, including all six incumbents. Many candidates told Election Commission workers they would return Wednesday, after the Fourth of July holiday.

It’s a typically crowded race on the council side – two years ago there were 23 candidates on the ballot, and four years ago there were 25. A wrinkle this year is that two incumbents have decided not to run for reelection: David Maher, who is president of the city’s Chamber of Commerce and has been serving dual roles since January; and Nadeem Mazen, who decided to help others run for office instead of running for a third term, but said he will likely return to seek higher office.

The council race sees the first open seats since Marjorie Decker decided not to run for reelection in 2011 after already being elected state representative for the 25th Middlesex District, which also represents Cambridge.

There’s generally less crowding in School Committee races. Two years ago there were 11 candidates, and four years ago there were nine candidates. This year, though, every incumbent is running for reelection, whereas in the 2015 election cycle Mervan Osborne moved out of Cambridge, making him ineligible to run; elections two years earlier saw two open seats, as Marc McGovern moved to the City Council and Alice Turkel opted out of a campaign.

The council run has some 16 new faces and one recurring challenger: Ilan Levy, whose campaign two years ago questioned the legitimacy of the Plan E charter style of government under which Cambridge operates. “Plan E is the root of fundamental problems, procedural and political, in our city. We need a charter change,” Levy said.

Two familiar faces are so far missing: Gregg Moree, a perennial candidate who spent the most per vote by far in the past two election cycles, without getting much traction. He got only 38 top votes in 2013 in the city’s ranked style of voting, and only 78 top votes in the most recent election. James Williamson has been a frequent candidate, but has not signaled that he’s running.

The School Committee race has two new faces in Laurance Kimbrough, a member of the city’s Police Review and Advisory Board and parent of a junior kindergartener, and Will MacArthur, a Harvard student who graduated from Cambridge Rindge and Latin School in 2016.

Along with the half-dozen incumbents, there are familiar faces in the School Committee race – Fran Cronin, who served on the committee from 2013 to 2015 and has more recently been a council legislative aide to Maher; and Crutchfield, who ran for the committee in 2015 with insight on the district gleaned from being a regular substitute teacher.

“I wanted to start canvassing and getting in front of people as soon as possible,” Crutchfield said. “We didn’t expect to get 50 names today, but we just kept going.”

Gebru filed 83 names, of which 45 had already been certified.

“Dropping off my nomination signatures on the first day builds on the growing momentum of our campaign,” Gebru said. “I want to show my supporters and competitors that I take my candidacy and the responsibility of elected office seriously. We have 127 days left, and I intend to spend each one focused on meeting my fellow residents and getting out the vote.”

“Practically, it also ensures that those signatures I collect are counted for me during official certification,” he said.