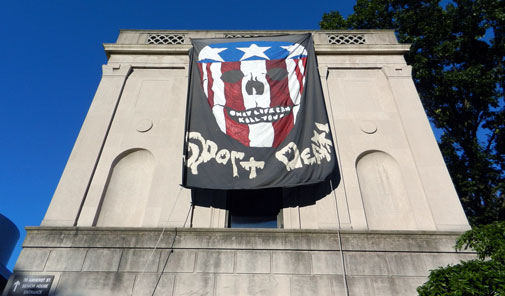 The fate of an MIT dorm has changed again, in apparent administration retaliation against student and alumni attempts to prevent an earlier announced change.

Initially, the Senior House dorm was to see its current residents reapply to stay and its longstanding culture diluted with first-year students taking part in a program called Pilot 2021 that emphasized career planning, physical fitness and healthy food.

Residents were unhappy with the imposition. The dorm has been known for decades as a creative if countercultural environment – complete with omnipresent murals and roaming cats – for an eclectic group of students that sometimes need extra support, including students of color, LGBTQI students or those who are low-income or the first in their family to attend college.

The plan announced Friday in a letter from Chancellor Cynthia Barnhart, though, turns Senior House into graduate student housing, with no current residents returning.

The letter sent to members of the Senior House community seemed to blame student and alumni response for forcing the toughened plan.

“I wrote last month that significant change is needed in Senior House,” Barnhart said in the letter. “The reaction from the Senior House community has reinforced our decision. The misinformation, denials and responses – online, in emails and in person – violate MIT values.”

Emails and a phone message were sent Friday to the Massachusetts Institute of Technology News Office seeking more information about the offending reaction and violation of values.

“The chancellor has discussed the concerns detailed in the letter with members of the Senior House community and will have no further comment at this time,” said Sarah McDonnell, a media relations manager for the institute.

Part of the response was a petition against the Pilot 2021 changes signed by nearly 1,400 alumni dating back to 1958, including 111 pages of signatures, pleading for Barnhart to recognize how Senior House “has always been a refuge for students who feel like they don’t fit in elsewhere on campus.”

Barnhart did not acknowledge the petition, but the overall reaction seemed to suggest to her that the culture of the residence hall would have a damaging effect on students living in it.

“We no longer believe that first-year and continuing students living in Senior House next year will be able to define for themselves their own community values and living experience,” Barhart wrote, referring to herself and institute President L. Rafael Reif, Provost Martin A. Schmidt and  Vice President Maria Zuber. “This has led us to conclude that our plan to reset the undergraduate experience in Senior House is unworkable.”

The Web page explaining the Pilot 2021 program has been taken down.

Senior House was targeted for change two years ago by Barnhart, citing low four-year graduation rates and a culture of illegal drug use. Without student input but with controversy over what, if anything, data about those issues showed, Barnhart denied first-year students the choice of Senior House, added mental health support staff and led a committee dedicated to a “Turnaround” plan. In April, she said incidents during the turnaround plan had cemented the need to change house culture.

Protests since then, including a sit-in and sleep-in at administrative offices, and media attention from publications such as The Atlantic, Forbes and Quartz, seem to have strengthened MIT’s intent.

“Senior House is now closed to undergraduates, and it will reopen in the fall to graduate students. We continue to stand by our responsibility for providing all MIT students with safe residential environments, and we intend to fulfill that obligation,” Barnhart said in the letter.

Senior House, which opened to students in 1918 as the institute’s first student residence, is now referred to just by its street address – 70 Amherst St. – in a Student Life website.