‘War for the Planet of the Apes’: Don’t bet against simians in battle for summer’s best 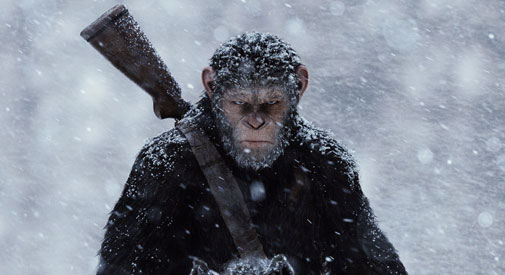 ‘War for the Planet of the Apes’: Don’t bet against simians in battle for summer’s best

Since the CGI resurrection of the “Planet of the Apes” franchise (can we all agree to forget the ill-conceived 2001 Mark Wahlberg-Tim Burton version?), the films – “Rise” (2011) and “Dawn” (2014) – have been working their way slowly up to the events that frame the classic 1968 film penned by “Twilight Zone” host Rod Serling and starring Charleston Heston. With “War for the Planet of the Apes” we get more breadcrumbs leading from here to there.

The plot picks up two years after “Dawn” ended with Caesar (Andy Serkis, the action-capture actor who so viscerally brought Gollum to life in “The Lord of the Rings” films) and fellow simians holed up in the woods trying to find a peaceful foothold as man employs military might to hunt down and eradicate them. We learn too that the simian flu that has decimated humankind makes apes smarter while it mutes humans and dims their mental capacity. (There’s your first breadcrumb).

The script by director Matt Reeves (“Let Me In” and “Dawn of the Planet of the Apes”) and Mark Bomback, who worked with Reeves on “Dawn,” adds some smart wrinkles with the apes trying to disengage from war, setting off to find an ape Eden out of human reach, while Caesar, having incurred deep personal loss, ventures off on a revenge mission. To stir the pot we get Woody Harrelson as a Col. Kurtz type – fittingly titled “The Colonel” – hellbent on preserving humankind via extreme methodologies and, as a result, coming into conflict with other military heads. Like Kurtz he’s gone off the reservation and has a legion of special force-trained believers to back his madness. He also has a few apes that have become turncoats, labeled “donkeys” and regarded slightly above slaves; only prisoner apes have it worse.

Don’t think too hard about where the timeline is going and why there weren’t more clues seeded in “Dawn.” It’s also true, as with any CGI-propelled spectacle – space epic or superhero beatdown – there are prolonged battle scenes that at times feel like a video game on steroids. But beyond the sharp narrative maneuvering, “War” has plenty more going for it than other summer noise out there, be it “The Mummy,” “Transformers: The Last Knight” or even “Wonder Woman” (which was head and shoulder above the other two). For starters, Serkis and Harrelson turn in two of the best big-screen performances of the year – though, while worthy, they’re likely to be overlooked come Oscar time. The film’s revelation is Steve Zahn as the mangy and withered Bad Ape, one of a bunch of zoo apes that ambled out on their own as the virus spread and encounter Caesar and his posse high up in the Californian hinterlands. One part Yoda with flashes of “Rain Man” and a dash of Gollum, he’s a lightning strike that’s at once full-bodied and genuine yet deft comic relief – “Baby Driver” could only dream of a character this rich.

Also among the talented ensemble are Terry Notary as Rocket, Caesar’s loyal sergeant-at-arms, and Karin Konoval as the sensitive and contemplative orangutan Maurice, who provides Caesar with sage council. There there’s the angelic Amiah Miller as the young mute Nova (a more mature version was played by Linda Harrison opposite Heston in the ’68 film, becoming something of a pinup rival to Jane Fonda in “Barbarella” and Raquel Welch in “One Million B.C.”), who winds up in Caesar’s charge and becomes the biggest clue as to how the series will link together.

The sets and cinematography by Michael Seresin, whose credits include “Midnight Express” (1978) and “Angel Heart” (1987), create a lush near future-scape where the wilderness and nature have crept back and begun to consume the once-invading concrete.

As the militarized human factions launch at each other and the ape narratives merge in the middle, you can’t help but think there’s some analogy – intentional or not – to the state of the world today, with angry residents rising up as colossal egos with their fingers on triggers bellow and bluster with philosophical demagoguery about the future of humankind. It’s a very real and eerie world Reeves and company have created, with promise of a payoff that’s yet to come, and tantalizingly so.