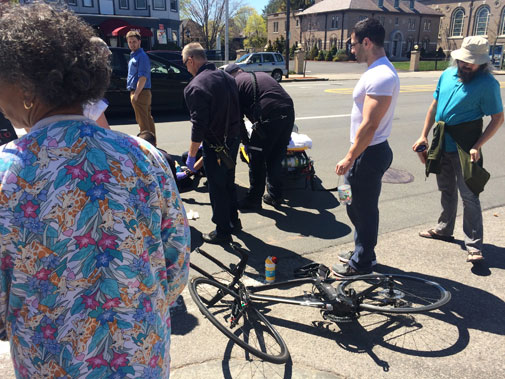 Continued complaints about “bicycle bullies” and other transportation tensions inspired a call Monday for the development of a document on safe riding to be posted citywide, and for a task force to pull that document together. But one city councillor says the needed changes are happening without any official intervention.

The city has rushed to add protected bike lanes since the death of two bicyclists last year and an outcry from many calling the city’s slow rollout fatally dangerous; the outcry since the installation of bike lanes on Brattle and Cambridge streets has come from businesses and pedestrians who feel the process ignored their concerns while serving often reckless riders who don’t know or don’t care about the rules.

“In the last two days, I have watched a dozen people ride the wrong way in the bike lane, speed between pedestrians in the crosswalk, bike the wrong way in the bike lane while talking on their cellphone, speed by a bus dropping off passengers and coming out of the side street into the bike lane without stopping or even slowing down,” said Robert Skenderian, whose Skenderian Apothecary on Cambridge Street has a front-row view of a well-used protected lane. “It is only a matter of time before another bicyclist is injured or killed by their own behavior – behavior that is affirmed and reaffirmed by the actions of this council.”

“The bicycle bullies love the Wild West the City Council has created,” he said. “Unless the council directs the police department to enforce the rules of the road on all forms of transportation and institutes a fine system for infractions on bicyclists, this document and the actions of this council are a waste of time.”

An order for a document explaining how to ride a bike safely passed, but Mayor E. Denise Simmons wound up setting aside her own late order to create a task force “to develop a comprehensive street safety and education plan.”

Though it seemed a simple enough motion, questions about who would be on the task force and how it would interact with similar city transportation groups were raised by councillor Nadeem Mazen. Councillor Jan Devereux had additional concerns. “I don’t think task forces often get things done, they don’t get the momentum, and this is a relatively urgent need,” Devereux said. “We ought to allow the city manager to tell us what he thinks will be the best combination of resources to get this done.”

When Simmons responded, she seemed to read from a different text than had been distributed, saying she’d given the city manager options in asking him to “bring a recommendation and/or to appoint” a task force; the distributed text asked simply for a task force to be appointed.

After Devereux expressed confusion, Simmons used her “charter right” to set the order aside for one regular meeting. (Because the Nov. 6 meeting is a special roundtable on housing policies, the task force idea won’t be taken up again until Nov. 13.)

Though he agreed with speakers during public comments calling for an adherence to higher safety and enforcement standards, a naturally occurring change in behavior might make the proposed document and task force less necessary, Mazen suggested in remarks earlier in the evening.

“I’ve been experiencing something amazing just over the last couple of weeks, and it has changed how I operate bicycles and Zipcars – the culture of those riding bikes and those driving cars has changed noticeably since we have changed the bicycle infrastructure,” Mazen said, admitting that his own past riding habits had been the kind that angered people such as Skenderian and three other speakers at the meeting. But instead of cruising through red lights while cars stop, suddenly “you see bikers stopping in groups.”

“Enforcement aside, those who bicycle are adopting a culture of a better adherence to rules, because it doesn’t feel as reasonable to just make your own decision when groups of bikers are stopping,” Mazen said. “I thought to myself, wow, I’m riding in this city for 10 years feeling unsafe and all of a sudden I know the exact moment when the culture of biking started to become safe, and it was this year.”