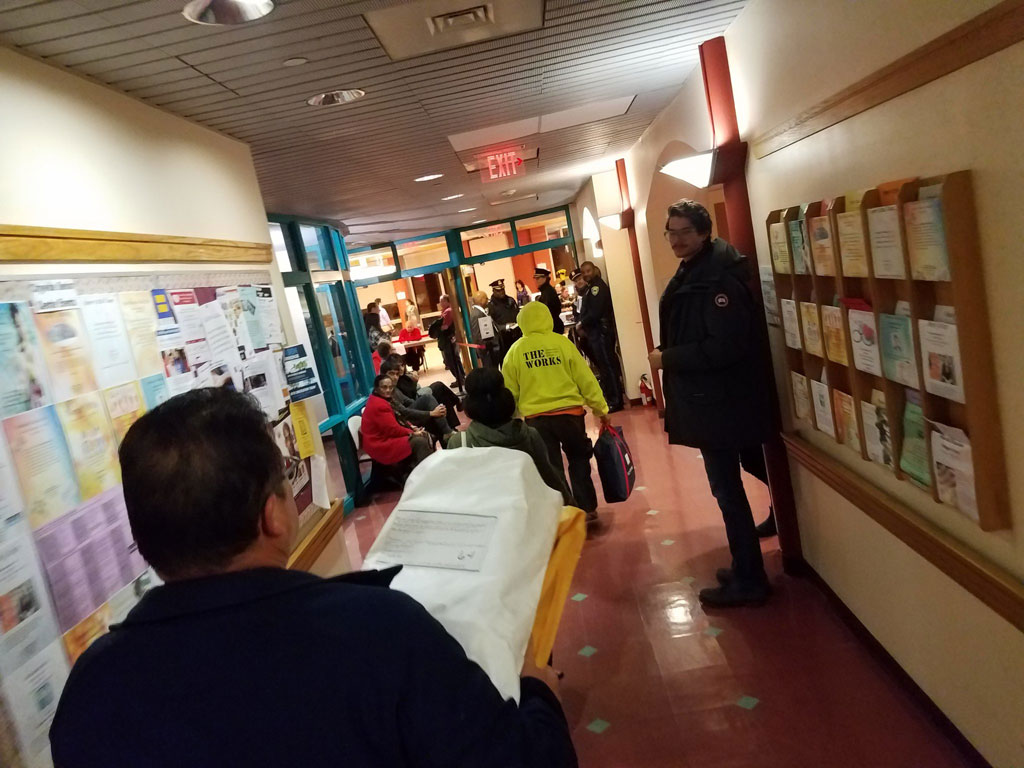 Ballots from Precinct 6-1 in Mid-Cambridge are the first to arrive at Tuesday’s election count, shortly before 9 p.m. (Photo: John Hawkinson)

On the School Committee side, only challenger Laurance Kimbrough was announced preliminarily as joining – again – all incumbents running to regain their seats: Patty Nolan, Manikka Bowman, Emily Dexter, Fred Fantini and Kathleen Kelly.

But after a lengthy delay from a voting machine memory card error, election commissioners couldn’t stress the preliminary nature of the results enough. These are “substantially unofficial and preliminary” results, commissioner Polyxane S. Cobb said at around 12:50 a.m. “I don’t want anyone to run home and say ‘I lost’” based on this count, she said, noting the large boxes of ballots that needed to be hand counted Wednesday.

Asked if the number of those so-called auxiliary ballots were bigger than in most Cambridge elections, though, Cobb waggled her hand – a gesture indicating “not really.”

The margin between Kelley and challenger Sean Tierney was so close that the auxiliary count, which would change how votes transfer from one candidate to another, could send Kelley off the council after six terms.

The first box of ballots arrived at around 8:55 p.m. to the counting room at the Citywide Senior Center in Central Square. All ballots had arrived by shortly after 10:15 p.m. But then the memory card problem occurred, leading to news that results would be delayed by an hour to an hour and a half as commissioners fed ballots from three precincts through a voting machine to allow for a proper count.

Election Commissioners pulled the preliminary results from 21,412 ballots considered valid for City Council, and 19,838 for School Committee. With a large number of candidates and potentially a post-Trump bump, voting was up by up about 16 percent from the previous municipal elections. 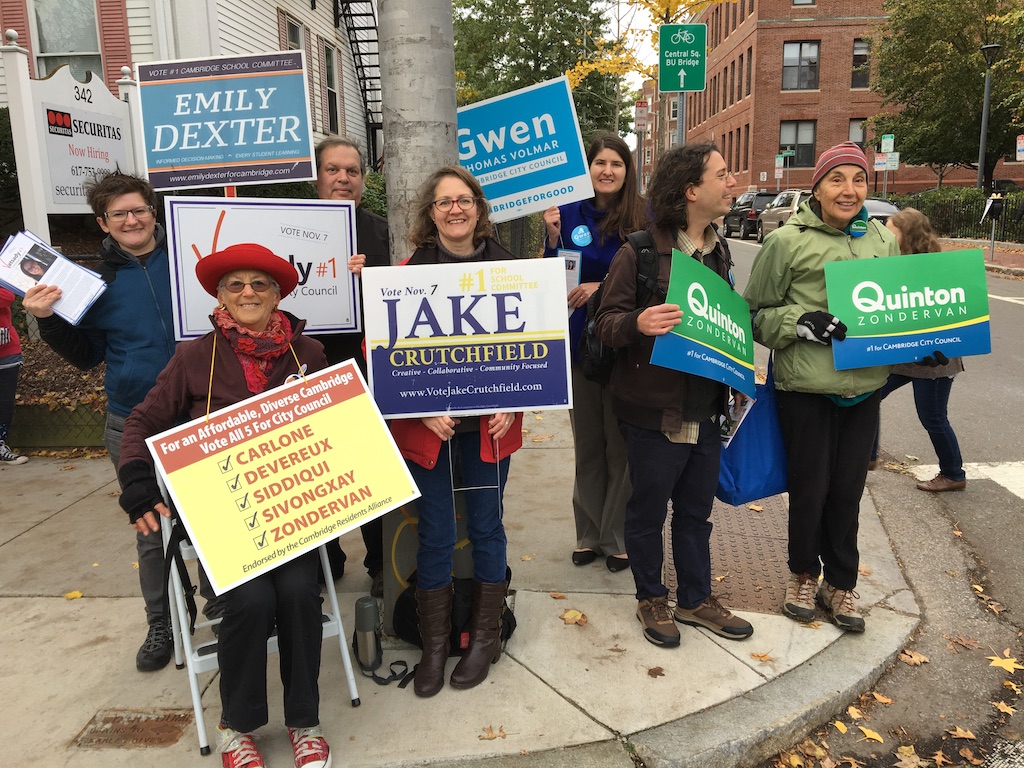 The count is set to continue from 9 a.m. to 5 p.m. Wednesday for auxiliary ballots – those that could not go through voting machines during polling hours for the city’s 11 wards and 34 precincts and must be judged by hand in a painstaking process by the commissioners.

In the council race, the “quota” needed to be elected in Cambridge’s proportional representation form of voting was 2,142. On the School Committee side, quota was 2,835.

Simmons, coming off a term as mayor, went well beyond her needed quota of votes in the first round of voting, with 2,499 ballots ranking her No. 1. But Siddiqui was also well above quota, at 2,409. No other council candidate beat quota; McGovern was the next closest, at 1,784.

On the School Committee side, Nolan soared past quota with 3,310 ballots ranking her No. 1. All other candidates were below quota, with Bowman closest behind at 2.667. 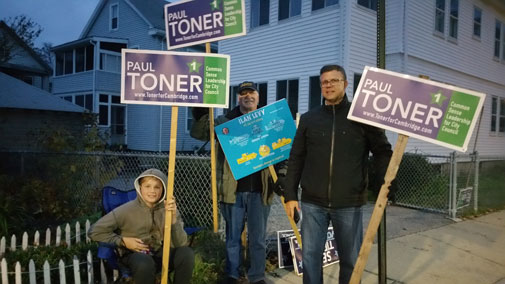 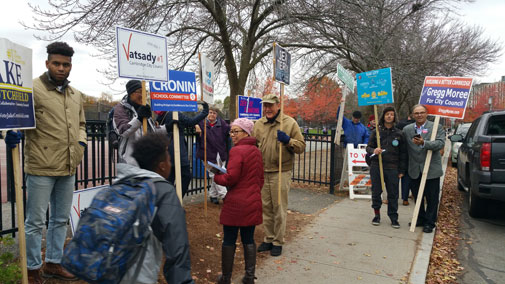 Top, a cluster of Toner campaign signs, including one held by City Council candidate Paul Toner. Council candidates Vatsady Sivongsxay, turning toward the camera, and Ilan Levy and Gregg Moree, right, gather near the polling place at The Peabody School in North Cambridge. (Photos by Charles Teague)

There were 26 candidates for City Council this year, the highest since the 29 who ran in 1993, including six incumbents. Leland Cheung decided not to run after three terms; David Maher will serve full time as president of the Cambridge Chamber of Commerce after eight terms; and Nadeem Mazen is leaving after two terms with an eye on a seat in the U.S. House of Representatives.

The council hasn’t had so many incumbents’ seats left open for an election since 1989, but that hasn’t prevented big turnovers – in 2013, four challengers were elected after two incumbents opted not to run.

There were 12 candidates for School Committee, with only one incumbent leaving his seat – Richard Harding decided to leave the committee after four consecutive terms to run this year for a council seat, a gamble that didn’t pay off.

After the deadline for overseas absentee ballots passes Nov. 17, vote counts will be made official.