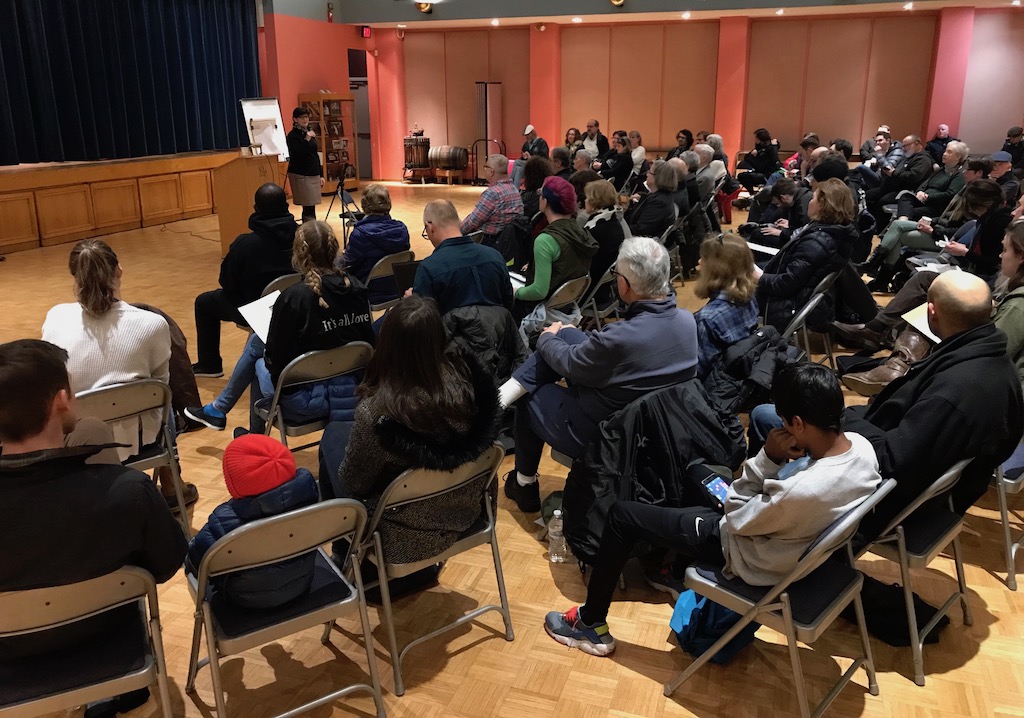 Fired up by protected bike lanes they feel are hurting local retailers, a group of residents and business leaders are vowing to take over citywide transportation planning by forming a grassroots group.

“We’re trying to take it out of the political arena and really take it to the grassroots level, because from the top down it hasn’t worked. It’s the top-down [approach] that put us in this position that we’re in right now,” said Denise Jillson, the executive director of the Harvard Square Business Association, at a Monday “Safe Streets for All” meeting held at St. Anthony’s Parish Hall in East Cambridge. “[We] can lay blame – and yes, I do say blame – on the City Council and on the city leadership that we’re in this conundrum, because certain things happened that were inappropriate.”

The meeting drew more than 60 people, seemingly split evenly between people angry over the bike lanes installed on Brattle Street in Harvard Square and on Cambridge Street, and bicyclists who expressed some bewilderment over what city streets should get instead to ensure the safety of people using all forms of transportation. The meeting was moderated by Robert Skenderian, who runs an apothecary on Cambridge Street and has said he has firsthand experience with how bike lanes hurt business and a front-row view of reckless behavior by “bicycle bullies.” 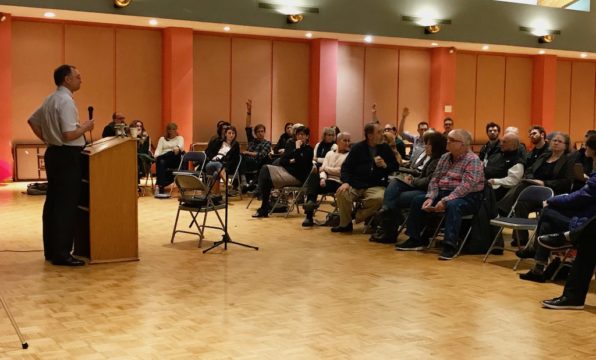 Robert Skenderian moderates the “Safe Streets for All” meeting Monday.

Skenderian was evenhanded in his choice of speakers at the two-hour meeting, though, and Jillson said the event was convened after discussion with Mayor E. Denise Simmons and City Manager Louis A. DePasquale. The grassroots group Jillson sees arising from the event would “work together hopefully under the leadership of the City of Cambridge,” with the city bringing back Toole Design Group – the company behind the Brattle bike lanes – under contract to reconfigure the street. The lanes were presented to the HSBA as “preordained,” she said, with “no vetting from the business community … What we do want is to get it right.”

The most concrete ideas to come out of the meeting were changing Kendall Square traffic patterns so Broadway and Main streets each had one-way traffic split into car and bike lanes – one street in, the other out; and adopting more of the style of bicycle infrastructure seen in Montreal, which has timed bicycle traffic signals and lanes separated from cars by concrete medians with trees and grass. Fully separated lanes would be hard to achieve without costing parking on many of Cambridge’s narrow roads, though, and the idea of keeping bicyclists off streets where there are businesses was presented as another virtue of Montreal’s approach, but also might be beyond local reach.

The meeting was lively but civil, even when resident Gary Mello alluded to two bicyclist deaths last year that kicked bike lane installation into higher gear and said bicyclists were “exploiting these deaths to advance their own agenda.” The line drew applause. (He explained later that the bicyclists’ agenda was “bike lanes on every street, overwhelming everything else we’ve got.”) Several people also complained about the speed with which the Cambridge Street bike lane had been installed, seemingly unaware its planning included a stakeholders group that met three times over several months, as well as two public meetings; others were confused to hear that the lane installation had been voted in by the public during the Participatory Budgeting process, which they hadn’t heard of despite four years of attempts by the city to publicize it.

There is a petition circulating to undo the Cambridge Street bike lane, one Inman Square business owner said.

Bicyclists described the positive effect the lanes were having on biking habits, such as their own ability to slow down because they felt less at risk from being hit by cars, and reminded others at the meeting that bicycle vs. pedestrian collisions were rare, with data showing that cars were by far the bigger risk to people on bicycles and on foot. Others noted that bike lanes were not the reason Main Street businesses nationwide, and not just in Cambridge, were suffering and closing.

But Skenderian began the meeting by saying he didn’t want the meeting to get into “data and statistics,” supported by audience members who felt safety data were incomplete or just not a “magic bullet.” Jillson wrapped up the meeting by asking participants to send in their transportation anecdotes.

Janie Katz-Christy, director of Cambridge’s Green Streets Initiative, was worried about the “extra-governmental” nature of the group Jillson proposed, and wondered if transportation infrastructure would be better handled as an official part of the ongoing work on a citywide development master plan, called Envision Cambridge.

In fact, there is a mobility committee as part of Envision Cambridge, but “literally it’s me and about 12 people who are bikers, out of 16 people … the reality is that specific working group is totally skewed,” said Ruth Allen, of the Envision Cambridge Advisory Committee. “When I bring up something about cars, I’m being inundated with ‘Well, we’re not going to have cars in 10 to 20 years. There’s going to be Lyft and Uber and car shares and mass transit, there’s going to be bicycles.’ So that’s what Envision Cambridge is envisioning. They’re getting that information.”

While it’s unlikely Utile, the company running the master plan process, would attempt to propose development policies based solely on the input of an advisory committee, Jillson was also unwilling to let a consultant hired by the city be the lone organized voice advising on transportation infrastructure for the coming decades.

“You can either sign up not, but we’re going forward,” Jillson told Katz-Christy, “because it’s not working for us.”

Jillson said afterward that she was pleased with the event, liked some of the ideas she’d heard and believed the committee concept was off to a good start.

Bicycle advocates contacted afterward weren’t sold on it, however.

While approving of the moderation, “the agenda was unclear to me even at the end,” said a Medford resident and Cambridge bike commuter with the astonishing name of Matt Carphree. “There seemed to be no specific articulable complaints about the lanes as built, other than ‘They aren’t comfortable.’”

City councillor elect Quinton Zondervan, who attended, said there was “clearly room for improvement both on the process and the design side, and hopefully we can elevate the conversation to get the best outcomes.”

“I want to see the city develop a clear implementation plan for the protected bike lane vision in the bike plan, with a robust public process that ensures all stakeholders are heard,” Zondervan said. But: “I look forward to leading that conversation on the council.”

The Mid-Cambridge Neighborhood Association meets from 7 to 9 tonight at the Cullinane Center at Spaulding Hospital, 1575 Cambridge St., to talk about Cambridge Street bike lane redesign.

Tom Meek contributed to this report. Its headline was changed Nov. 15, 2017; the original was “Blaming city government, foes of bike lanes plan a takeover of transportation planning.” It was changed to reflect that some want bike lane changes, rather than opposing bike lanes in general. It was also corrected to note that city councillor elect Quinton Zondervan attended the meeting.