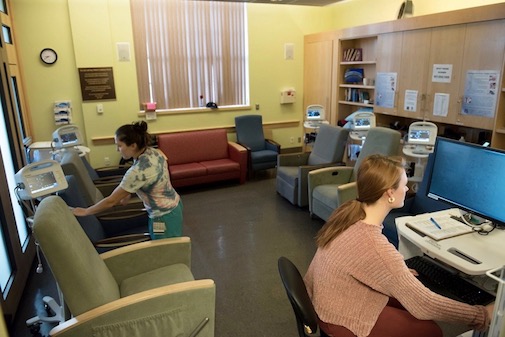 Boston Health Care for the Homeless Program opened its sobering center in April 2016, filling what had been a conference room. (Photo: BHCHP)

The spiraling opioid drug epidemic has addiction treatments advertising on public transportation and local police looking at public lockboxes stocked with overdose treatments for use by passers-by – and now a more comprehensive approach proposed by a Cambridge working group. Led by vice mayor Marc McGovern, the group began work in August on a report released Friday on “Addressing the Opioid Epidemic in Cambridge.”

Here are five of the most worrisome and intriguing takeaways from the report, using the report’s original language when possible, though edited lightly for publication.

We’re about to start getting real-time information. Much of the information in the report comes from recent years, but may already be outmoded. (Consider, for instance, that overdoes deaths in Cambridge doubled in 2016 from the previous year, which was nearly a doubling of overdose deaths from the year before that.)

More drug-disposal points are called for. Last year the city collected more than 9,800 pounds of unwanted medication at community “take-back” events; at four household hazardous waste collection days run by the Department of Public Works; by offering prepaid mailers to the public; and by maintaining a 24/7 medication disposal kiosk at the police department’s headquarters. McGovern’s working group wants a second safe medical disposal site for prescription drugs and needles open by spring and three more by spring 2020, likely at hospitals or pharmacies. (That’s right: The epidemic is still expected to be a thing in 2020.)

“It would be more convenient for residents that cannot travel to East Cambridge or are not willing to visit the police department,” the report says.

We need a sobering center. The Boston Health Care for the Homeless Program responded to an increase in opioid overdoses, which are magnified among the homeless, by creating a SPOT – a Supportive Place for Observation and Treatment – with medical monitoring and access to primary care and treatment for eight to 10 people at a time at high risk of overdose “who would otherwise be outside on a street corner, alleyway or alone in a public bathroom.” It’s cared for nearly 200 people in more than 800 incidents in just four months, and the working group suggests one for Cambridge.

The drop-in facility would have eight reclining chairs for people on drugs such as heroin who walk in, sometimes helped by friends or outreach workers. They are treated if an overdose occurs and monitored by medical professionals and connected with services. It is not “a supervised injection facility [or] a needle exchange program.”

Long-term treatment is talked about, but not supported. At the Aug. 7 committee meeting that sparked the report, Ronnie Springer of Boston’s Bay Cove Human Services talked about the near impossibility of opening a space with beds for drug treatment because “no one wants these people in their neighborhood,” despite the state’s “great emphasis” on holding people in treatment for as long as possible. That led the organization to begin figuring a way to get addicts to a 64-bed program in Stoughton that was half full, despite the difficulty of getting people there from Cambridge. A big part of the problem: Health care facilities aren’t getting reimbursed at a rate that covers their cost of treating addiction.