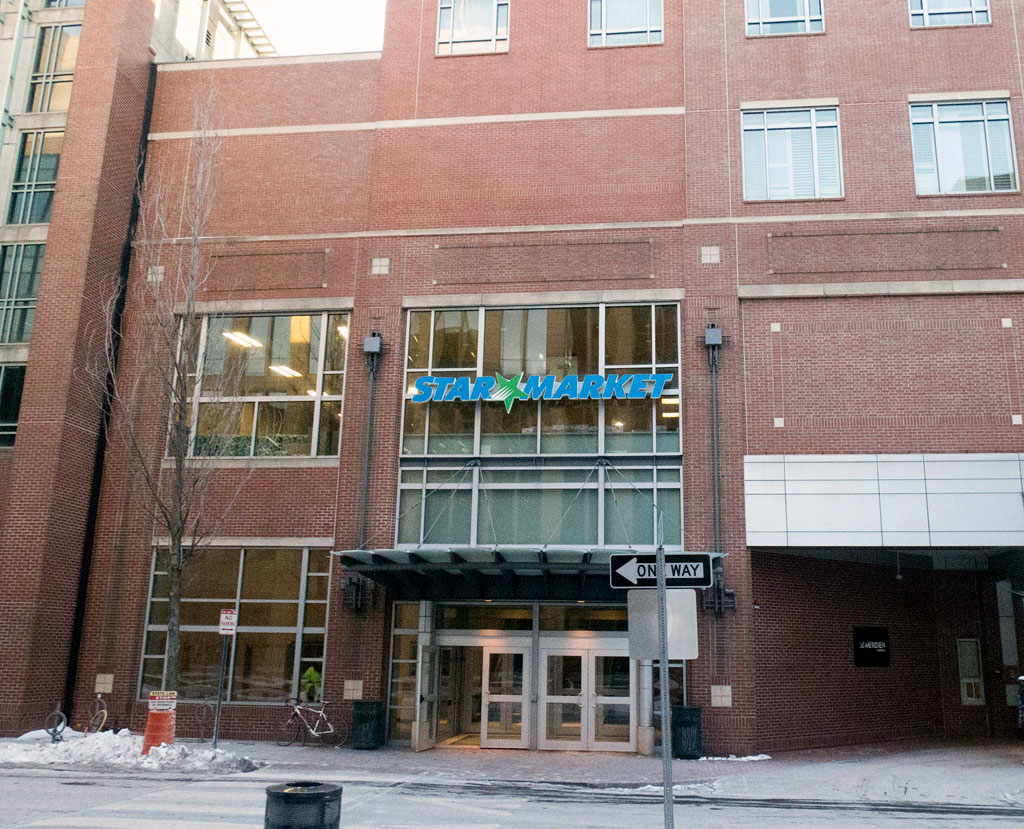 The Star Market at 20 Sidney St., University Park, has been open since 1998. (Photo: John Hawkinson)

One less supermarket in Cambridge.

The Star Market at 20 Sidney St., University Park, will close permanently on Feb. 3, a Star Market spokeswoman said in a statement Tuesday.

“Like all retailers, we’re constantly evaluating the performance of our portfolio of stores,” said Teresa Edington of Star. “Closing an underperforming store is always a tough decision, but we’re focused on growing our business by being the favorite local supermarket, and running great stores where people love to shop.”

The Star Market has been open for two decades – since 1998 – and leverages the parking at the adjacent University Park garage at 55 Franklin St.

Jay Kiely, who manages leasing for Forest City Boston, was out of the country and could not be reached, but city councillor Jan Devereux said he’d told her the store was “low performing” and that another factor in closing was the five other markets within a mile: two Whole Foods, a 34,000-square-foot store on River Street and a 14,000-square-foot store on Prospect Street; and H Mart, the Harvest Cooperative and Target, all on Massachusetts Avenue in Central Square. A Brothers Marketplace by Roche Brothers has been announced for Kendall Square.

Mayor Marc McGovern said he had been in conversations about the closing over the weekend, but was “still looking into it” on Wednesday.

City councillor E. Denise Simmons filed a policy order for next Monday’s council meeting asking the city manager to look for other supermarkets that could fill the space, such as the popular discount chain Market Basket. Many Cambridge residents shop at the nearby Market Basket in Somerville because its prices are much lower than the Cambridge options. But Market Basket draws customers from surrounding communities and generates a lot of traffic; while University Park has parking, the streets that lead to it are often already congested.

Local retail consultant Jesse Baerkahn said he didn’t have direct knowledge of the reasons for the store’s closing, but “my understanding is that it was never a very well-performing store, and no doubt there has been some increased competition of late from additional options in the local market – H Mart in particular – with relatively little new housing coming to market in the past half-decade.”

“Star/Shaw’s has closed more than a handful of stores locally over the past half-decade,” Baerkahn said, having heard that “they just aren’t performing well when stacked up against the other bigger players in the market, regardless of price point,” from Whole Foods Market on the higher end to Market Basket on the lower.

When the City Council enacted special zoning for University Park in 1988, the focus of discussions was housing. In a January 1988 commitment letter, Forest City and MIT made written promises about the phasing of residential development and affordable housing; but there was no written commitment to maintaining the supermarket. Indeed, it would be another decade until the final phase of University Park was built, including the Star Market and the University Park at MIT Hotel, now a Le Méridien hotel.

MIT has no involvement with any leasing at University Park, said Sarah Gallop, the institute’s co-director of government and community relations.

Edington said Star’s closing was announced Dec. 29. “While the decision to close a store is always difficult – given the impact on employees and customers – it was made only after careful evaluation and was guided by what is best for the company’s ongoing success and future growth,” she said.

This post was updated Jan. 9, 2018, to emphasize the nature of analysis offered by retail expert Jesse Baerkahn.