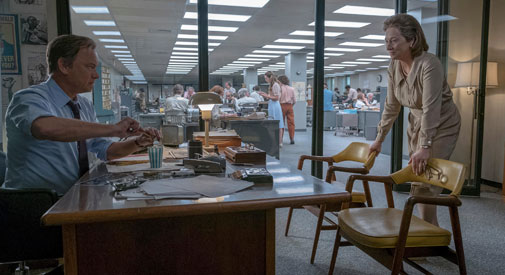 This Steven Spielberg flashback to tumultuous times of government transparency and freedom of the press as hot-button issues is not only a nostalgic and cautionary rewind, but a haunting reflection of where we find ourselves today. Before it broke Watergate, The Washington Post (“The Post” of the title) found itself on the edge of extinction in the wake of the publisher’s suicide and his widow’s struggles against a chauvinistic landscape and lure of corporate cash. 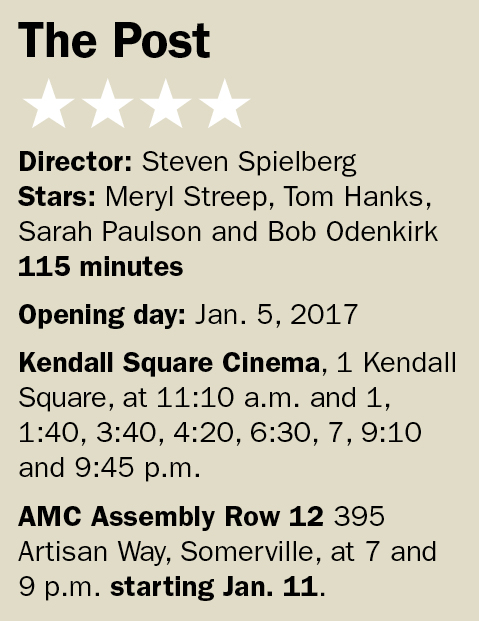 As dire as that all may sound, the core of “The Post” concerns itself more with journalistic integrity and the onus to inform the public. Shades of “All the President’s Men” (1976) and “Spotlight” (2015) run deeper than just sheer thematic similarity – there’s an actual blood tie in Josh Singer, an Oscar winner for “Spotlight” who partners with Liz Hannah on the “Post” script, and the Watergate break-in, the source of much journalistic scrutiny in “All the President’s Men,” is where “The Post” so poetically ends. Both “Presidents’s Men” and “Post” prominently feature legendary Washington Post editor Ben Bradlee who, no matter who’s playing him, commands the newsroom with dignity and a wry dash of tough love. In the 1976 film he’s played with gruff, stoic smoldering by Jason Robards, who rightly won an Oscar for the portrayal; in Spielberg’s prequel of sorts, he’s played with equal effectiveness by the affable Tom Hanks. The Hanks Bradlee soaks up more screen time, but, like Robards, the two-time Oscar winner is blessed with a meticulous script and a top-notch cast to play off – an embarrassment of riches, if ever there was one.

The journalistic rubbing point in “The Post” surrounds the Pentagon Papers, documents showing U.S. involvement in Vietnam since the end of the World War II as commissioned by Defense Secretary Robert McNamara (Bruce Greenwood). We begin in the jungles of the war-torn country following the journeys of a Rand Corp. employee (Matthew Rhys as Daniel Ellsberg) working on the report, who years later, disillusioned, leaks it to The New York Times. The Times splashes portions of the massive, damning repot across the front page and is subsequently muffled by a cease-and-desist order by the Nixon administration, which is where Bradlee and his team decide to jump in. If the Times can’t finish revealing the covert manipulations in Southeast Asia to the public, surely someone should. The question becomes how to obtain the papers and circumvent Nixon’s legal firewall.

Opposite Hanks, Meryl Streep plays widow Katharine Graham, who’s well steeped in affluence, decorum and afternoon tea but determined to make a go of it as the head of the paper. The relationship between editor and owner is respectful personally and professionally, with Graham seeking Bradlee’s input in the navigation of the paper and its fiscal future. Bradlee, on the other hand, want Graham to leverage her friendship with McNamara to get inside scoops – the time is 1971 and McNamara, who served on the Kennedy and Johnson administrations, has entered nongovernmental life and moves in her D.C. social circles. The subtle jockeying by all three becomes a most civil parlor game, telling of an era when media were far too cozy with their subjects to justifiably claim objectivity.

Given the leads, the director and the writers, there’s plenty of Oscar timber to be hewed in “The Post,” and yes, all the above are worthy. But there’s also a great supporting cast, including Bob Odenkirk (from the series “Better Call Saul”) as Ben Bagdikian, Bradlee’s somber, relentless foot soldier who tracks down the papers, and Greenwood. The scene where McNamara is civilly pressed about his Vietnam decisions by Graham after a yacht christening come poetically close to what Errol Morris extracted from the former secretary of defense in the Academy Award-winning documentary, “The Fog of War” (2003).

In the denouement, the decision to print or not is tethered to a possible corporate deal. The impact of one on the other – doing the right thing journalistically and ensuring the paper’s survivability – is complicated, and it’s incredible, looking back, at just how much lead time folks needed to gear up for press time and the intricate manual process of making copy and publishing. The final frames tying into Watergate should give audience members who remember the time feelings of both nostalgia and disgust, considering the abuses of power about to be unearthed. As Robert Mueller digs into our current administration’s alleged misdoings, we can only hope there are journalists willing to work this hard and take such risks to tell people the truth.