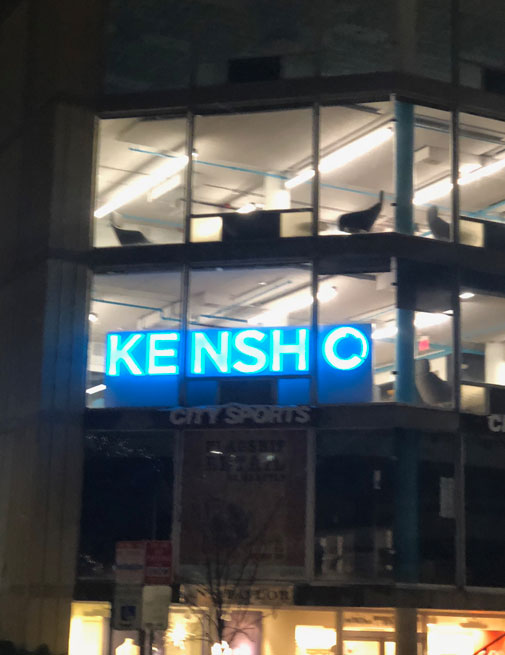 The bidirectional bike lane on Brattle Street has company in controversy since Kensho Technologies, a growing player in the machine learning and analytics market targeting the finance, health care and national security sectors, has alerted residents and visitors to its new digs at 44 Brattle St. by erected a giant, electric blue LED sign – an intensely bright beacon that one passer-by described as an “optical oddity.”

Nowhere else in the historically zoned Harvard Square are there any such stark illuminations. The Kensho moniker stands out even more against the sheer spareness of the glass-encased building it occupies and the wintertime darkness that consumes Brattle Street at night.

The sign went up just over a week ago.

Update on Jan. 12, 2018: The sign was dimmed Friday after feedback from neighbors.

According to Charles Sullivan, executive director of the Cambridge Historical Commission, it is not in violation of any code or ordinance. “The Kensho sign was reviewed by [Community Development and Inspectional Services] and found to conform with the provisions of the sign code. The City Sports signs on the exterior of the building will be replaced with Kensho signs also,” Sullivan said, referring to the remains of the sporting goods store that closed all of its 26 stores in 2015.

“The other issue,” he pointed out, “is the commission’s lack of jurisdiction over interior features generally.”

The city has lagged in writing and adopting coherent outdoor-lighting laws since invasive light complaints came before the City Council and city planners at least a decade ago; the lack of ability to limit illumination leaking from building interiors has been cited by many as a weakness of the most recent efforts. In September, a despairing councillor said the city would be better off adopting a resident-written law from 2013.

Some are concerned about the precedent set by the tech company’s branding. “Kensho’s new [LED] window sign points to the need to reconsider standards for both exterior and interior signage in the Harvard Square Conservation District,” said vice mayor Jan Devereux, who believed a study group was in process to review the conservation district’s guidelines.

The lights can be dimmed, Kensho said. But inside its offices, workers seemed literally above any complaints.

“We hadn’t had any such feedback as of yet,” said Bhavesh Dayalji, head of client operations for the company. “We’re happy to be part of revitalizing Harvard Square, as more and more retail spaces are left empty. We’re also one of the largest employers of engineers in the Cambridge community and excited about some of the plans we have for the future that will benefit the wider Cambridge community.”

Most innovation ventures in Cambridge settle in and around Kendall Square, and much of the office space that Kensho now occupies, as Dayalji points out, had been vacant for some time.

One observer in Harvard Square seemed to appreciate what Kensho had installed, calling it “a sign of the times. You’ve gotta keep up.”