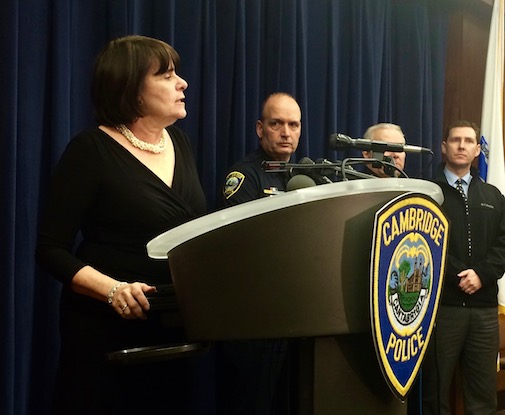 Bail will no longer be a factor in nonviolent, low-level criminal cases in the local district court, District Attorney Marian Ryan said today. The bail system will go on as usual only when “facts and circumstances suggest it is necessary,” including in cases of sexual assault, domestic violence and firearms.

“Recognizing that even a short period of incarceration can cause tremendous upheaval in one’s life, including loss of employment and housing, this practice seeks to prevent incarceration solely due to a lack of financial resources and in cases where we don’t intend to seek a jail sentence,” Ryan said in a press release.

But bail and the systems that have sprung up around it, such as bail bonds businesses that the ACLU says bring in up to $2.4 billion annually, have drawn increasing criticism as punishment before trial, especially because it falls lopsidedly on people of color and the lower-income. Bail reform efforts are underway nationwide, including in Vermont and New York, where the Manhattan district attorney made an announcement similar to Ryan’s on Tuesday.

There are nearly a half-million people in jail awaiting trial nationwide, many because they don’t have the money to be set free, the American Civil Liberties Union said in December.

“Whether or not you are in jail should not depend on your ability to pay for your freedom,” said Udi Ofer, the organization’s deputy national political director and director of the Campaign for Smart Justice. “It is one of the most corrupt and broken parts of our justice system.”

Ryan said her action reflects an “evolving practice” of this office informed by discussion with the Legislature, county chiefs of police, attorneys, community leaders and the public. “It is also reflective of our larger focus on understanding the impact the criminal justice system has on people’s lives and presenting alternatives to prosecution such as restorative justice and diversion,” she said.

Donna Patalano, who is running to replace Ryan, called the bail announcement “Band-Aid reforms” made without revealing data needed to understand what is at stake.

“Under the current district attorney, pretrial incarceration has increased by 110 percent since 2013, but the arrest rate is down 35 percent,” said Patalano, former chief of professional integrity and ethics for the Suffolk County District Attorney’s Office and chairwoman for the Board of Bar Overseers for the Supreme Judicial Court. “What Middlesex needs is culture change and a thoughtful, comprehensive approach to reform that just isn’t happening right now.”