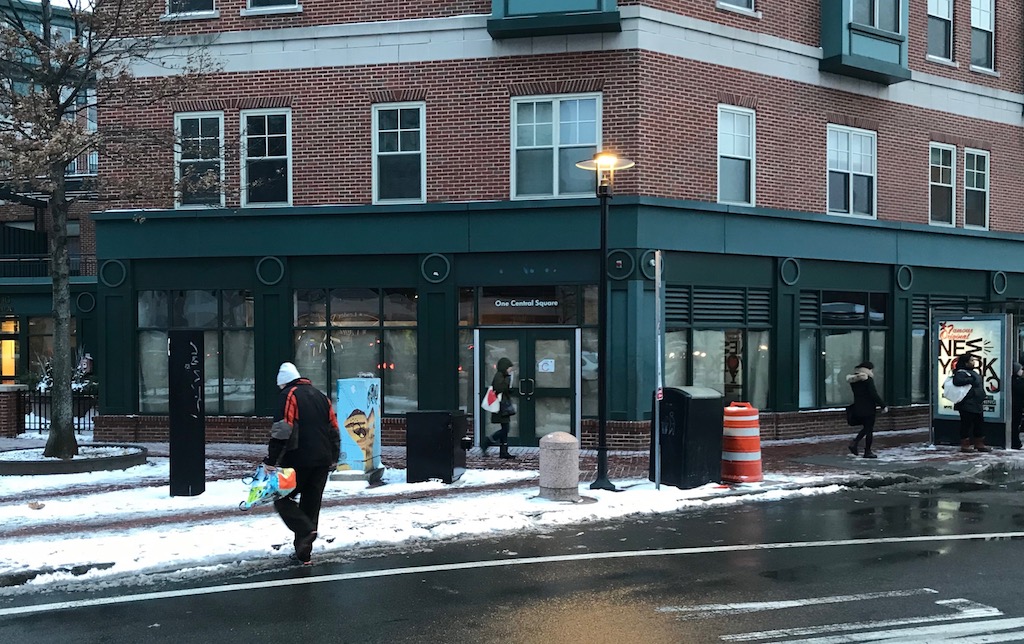 The long-empty space on Carl Barron Plaza in Central Square is being renovated for Amazon. (Photo: Marc Levy)

After sitting empty for more than a decade of its 17-year existence, a giant retail space in the heart of Central Square is getting a tenant: an Amazon “merchandise pickup store,” according to the firms designing and building the space and city Inspectional Services records.

It will spend about $480,000 remodeling the 3,580-square-foot retail space called One Central Square, where Massachusetts Avenue meets River Street, “to be separated into mercantile and storage/stockroom spaces,” Inspectional Services records show.

The property sits on Carl Barron Plaza, long a focus of municipal head-shaking over unfulfilled potential – at least in part because One Central Square has spent most of its existence empty at the base of the residential Holmes Building. Its sole use was a few years spent as an AT&T store, said Annette Born, the real estate agent who represented the space for Urban/Born Associates until her retirement a year ago.

With plans to renovate Barron Plaza in the 2020 fiscal year, the Central Square Business Association hosted a “New Vision” workshop Saturday to generate ideas for the redesign, but news of Amazon’s arrival wasn’t known widely at the time.

“Some of these companies take forever,” Born explained. “They do the deal and they don’t build out until they get to whatever number it is on the list. Or they just stockpile it for something. They certainly can afford to.”

The Central Square Business Association’s executive director, Michael Monestime, wasn’t able to comment on the Amazon project in time for this article. Amazon officials did not return messages.