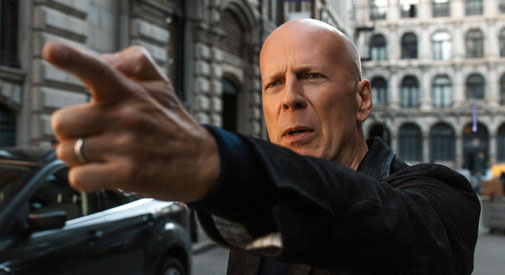 I like Bruce Willis, I do. But, sorry Bruce, you’re no Charles Bronson, not even close, and even more to the point, Eli Roth is no Michael Winner. 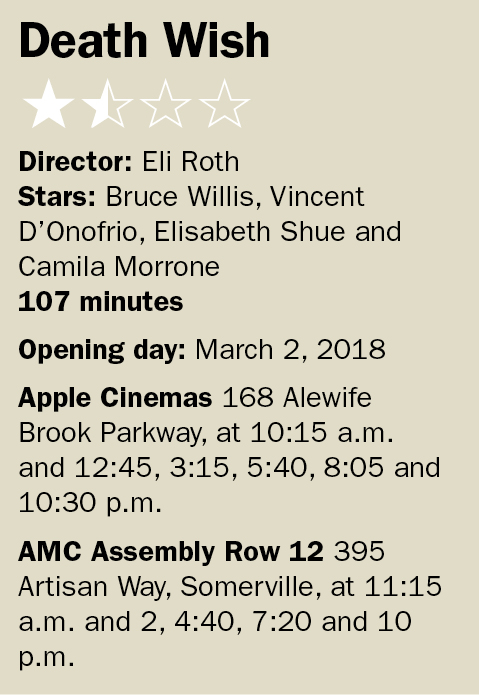 Who might Micheal Winner be, you ask. He’s the guy who directed the original “Death Wish” back in the 1970s with Bronson as a New York City architect looking to avenge the death of his wife and rape of his daughter. Winner was also responsible for two of the series’ feeble follow-ups (“Death Wish II” and “Death Wish 3”) and “Won Ton Ton: the Dog who Saved Hollywood” (1976). Weak tea to be sure, but that said, that 1974 collaboration yielded a palpable revenge fantasy chock full of sharp, witty commentary and a Bronson brimming with nonchalant machismo. In the Roth/Willis updating, motive, cathartic process and emotion get tamped down in favor of staging and contrivance.

While much of the narrative bare bones based on Brian Garfield’s novel remains, much has changed as well. The setting has flipped from New York to Chicago, and the avenging Paul Kersey is no longer an architect but a surgeon who’s been witnessing the city’s 20 year high crime rate firsthand via his operating table – the opening scene of a cop rushed into the ER feels a bit heavy-handed and becomes an omen as to how Roth, the gore-meister behind “The Green Inferno” and the “Hostel” films, wants to go. There’s a wealth of technological advancements from the past 40-plus years (PCs, cellphones, social media, GPS and smart cars to name a few) that feed nicely into the plot. Willis’ Kersey too is not an urban dweller, but lives in the affluent ’burbs. The crew that take out his wife and daughter early on are less cruel than the Bronson versions (the incident is on his birthday, but there’s no rape that we see) but the violence that Kersey ultimately dishes out is far more decisive and sadistic.

Kersey’s first takedown, a carjacking, gets captured on phone, but he’s smart enough to wear a Belichick-style hoodie. Of course the video goes viral and the “white guy in a hoodie” gets branded the “Grim Reaper.” Talk show debates ensue. The film’s most interesting moments come when Kersey goes to a local gun store and asks how much paperwork he’ll need to file and how long he’ll need to wait, and the young woman behind the counter scoffs, pretty much underscoring that the process that has failed many a victim in school shootings is a joke. In other scenes, race and racial violence cast smoke, but never enough to catch fire. Roth is more interested in the wow factor, showing busty babes blasting off semiautomatics (his buddy Tarantino used similar footage with meaningful impact in “Jackie Brown”) or a group of kids, enthralled by the gun violence they just saw, acting it out – “bang, bang” they shout with fingers forming guns, almost a straight-up lift from Sam Peckinpah’s indelible “The Wild Bunch” (1969). Some things should not be copied – Peckinpah for one, Bronson for another.

One of the marvelous aspects of the ’74 version was its on-the-street feel and the conflict within its protagonist, who struggled with right and wrong, and with rage. The 2018 version goes all in for blam-blam justice. It’s a cold, cruel hammer that taps out soulless execution and after soulless execution, wasting Willis’ flickers of humanity. Roth seems to know where the film would be heading and, in a prerecorded preamble at the press screening I attended, said that if the audience seeing “this special screening” leaked any plot twists (uhmm, it’s a remake) or gave it a bad review, he’d find us and go “Bear Jew” on us.