‘Thoroughbreds’: In a class of their own, girls need that bad stepdad taken care 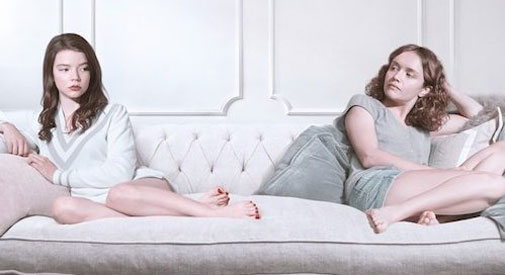 ‘Thoroughbreds’: In a class of their own, girls need that bad stepdad taken care

What begins as a chess match of personalities between two young women nestled in a one-percenter enclave of Connecticut turns into a bloody bonding experience. In execution, “Thoroughbreds” feels like something Martin McDonagh (“Three Billboards Outside Ebbing, Missouri”) might dream up, if he were to fuse “Heathers” and “Dazed and Confused.” 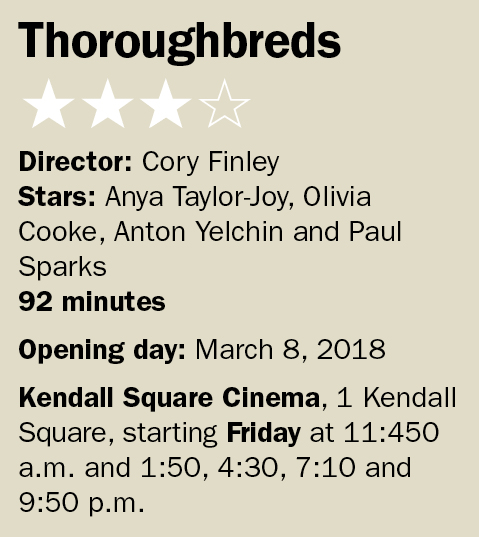 First-time director Cory Finley orchestrates the cloistered black comedy with veteran aplomb, and while that’s a testament to the young filmmaker’s skill, the success of “Thoroughbreds” hangs entirely on the deft performances by Anya Taylor-Joy (“The Witch”) and Olivia Cooke as the girls. Lily (Taylor-Joy) finishing up at Exeter (or is it Andover?) gets hired as a tutor for Amanda (Cooke), who’s recently been shaken by a traumatic event and is something of a social outcast in town – slaughtering a horse “Equus” style tends to do that. The tutorial sessions are less about anything academic and more about the fraught friendship between the girls. Rife with an uneasy air, Amanda, the more outwardly affected of the two, constantly puts herself upon Lily, who fends off the probing barbs and ingratiating incursions with prim-and-proper awkwardness.

As the lens pulls back, questions abound. Is Amanda’s mom paying Lily to be a companion to Amanda? Is Lily really as polished and all that she postures to be? The lines remain blurred, but if there’s one thing the girls bond on, it’s that Lily’s stepdad (Paul Sparks) is a controlling dick and must be removed. You never think the girls will really go through with it, but then then they blackmail the town’s 30-year-old loser wannabe drug dealer (played by Anton Yelchin, who gives the film big emotional strokes in his last role) into a “make it look like a break-in” scheme. Things don’t go as planned, and events move in shockingly unpredictable ways.

Clearly Greenwich was on the mind of Finley, who went to Yale, though the affluent ’burb is never mentioned (the film was actually shot in Cohasset and Wellesley). A playwright by study, Finley was once looking to produce “Thoroughbreds” (an obvious reference to the beast and the upper crust) as a stage drama; but lightning happened, much of that coming in the casting of the leads. When talking about the two girls’ symbiotic relationship on screen, Taylor-Joy, currently shooting the Marie Curie drama “Radioactive,” said in a brief interview with Finley that she and Cooke doing almost everything together off set, not by plan, helped underscore and emboss the complex relationship between their characters.

Like a McDonagh film (“In Bruges” and “Seven Psychopaths” are his other endeavors), “Thoroughbreds” has a stagey feel, is character driven and provocatively dark. And you ask questions in the end. It’s what art is meant to do, and while this isn’t a big film, you can bet all three principals are on to bigger things.