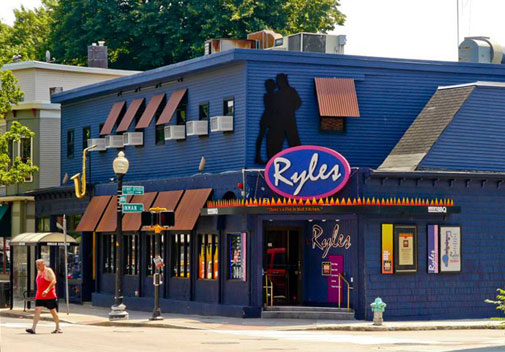 When the Ryles Jazz Club ends its four-decade run and closes at the end of June, its owners expect a high-end liquor store to open in its place. But neither the East Cambridge Business Association nor councillor Tim Toomey is sold on the idea, and on Wednesday the License Commission deferred a decision.

The deferral is based on a rule that two alcohol licenses can’t be used at one address, and the three-member commission said it needed time to consider assurances that the Ryles’ pouring license and the off-premises license being brought to 212 Hampshire St. wouldn’t overlap by the time the state’s Alcoholic Beverages Control Commission confirmed a commission decision.

The plan is for Ryles owners Gary Mitchell and Aimee Baum, of the longtime Inman Square family also behind the square’s S&S Restaurant & Deli, to rent – and later sell – the space to Binoj Pradhan.

“It’s a dense, urban area with a lot of walking traffic by a changing demographic that appeals to Mr. Pradhan’s approach to tastings, pairings, craft beers and liquors,” attorney Andrew Upton said of Inman Square in his pitch to commissioners. “That this will turn into a package store means a much earlier close than a club and much lower likelihood of noise from patrons who’ve had too much of good time coming out and disturbing neighbors. This will be a lower-impact use than currently exists.”

Pradhan already runs City Liquors on Cambridge Street, as well as the Masala restaurant in Somerville’s Teele Square and other businesses.

He said he would use half of the ground floor’s 4,500 square feet at the former Ryles for the liquor store and rent the other half to a business approved by the Inman Square Neighbors Association. (A deed restriction by the Mitchell family says it can’t be “used as a restaurant, bar, eatery, coffee shop, gourmet food shop or music venue” for the next 30 years.) A use hasn’t been decided for the 3,000-square-foot second floor, Pradhan said.

Mitchell assured commissioners that he was committed to seeing Pradhan’s store replace Ryles, and would even hand over the Ryles license to eliminate doubt that he would change his mind and make the commission’s approval of the plan illegal. With the family remaining invested in Inman Square at S&S, he’d said he’d like to see the area become more like Huron Village and adapt to meet the needs of the veritable highway of bicyclists passing through daily.

“We feel the the square is dead in the daytime for retail. We’ve tried on many occasions – with the flower shop, the toy store – but when Whole Foods came,  it really sucked the life out,” Mitchell said. “We feel Binoj, who has a fine reputation, would help bring some retail.”

The East Cambridge Business Association, of which Pradhan is a member, urged him to talk with the Inman Square Neighborhood Association, which endorsed the liquor store plan after an hour-and-a-half meeting, Pradhan said. A member of the neighbors group was on hand Wednesday to express his enthusiasm.

But Matt Cloyd, chairman of the neighborhood association, said later that Pradhan had mischaracterized the results of the meeting, which had been more about the deed restrictions. “If anything, the straw poll indicated that the members present consider the proposed liquor store the best option in a set of bad options,” Cloyd said. “This hardly qualifies as ‘endorsement.’”

The position was clarified in an email to Pradhan before the License Commission hearing, Cloyd said, and he was “disappointed” that Pradhan went on to misrepresent the association’s position.

On top of that, a letter from the business association dated Tuesday said that while “conceptually, his ideas for the building renovation would be a benefit to Inman Square’s residents and businesses … we expressed reservations about the ability of the neighborhood to accommodate another liquor store in close proximity to two other similar stores.” Toomey’s letter was similar in supporting Pradhan’s store “with reservations,” commissioners said. Inman Square Wine & Spirits and Martin Brothers Liquors are within a couple of blocks of the Ryles location on Cambridge Street.

The business association also had concerns that the proposed store would “be a national beer franchise” with stores in 16 states, running afoul of city laws against “formula” businesses and counter to the “independent nature of Inman Square that has welcomed many family-owned businesses over the years.” Clarification was needed, said association’s executive director Jason Alves and president Patrick Magee.

Neither Pradhan nor Upton had seen the letter, though, and by the time they left the commission meeting Wednesday they didn’t know they had another concern to answer.

This post was updated May 1, 2018, to correct the position of the Inman Square Neighborhood Association based on an email from its chairman, Matt Cloyd.