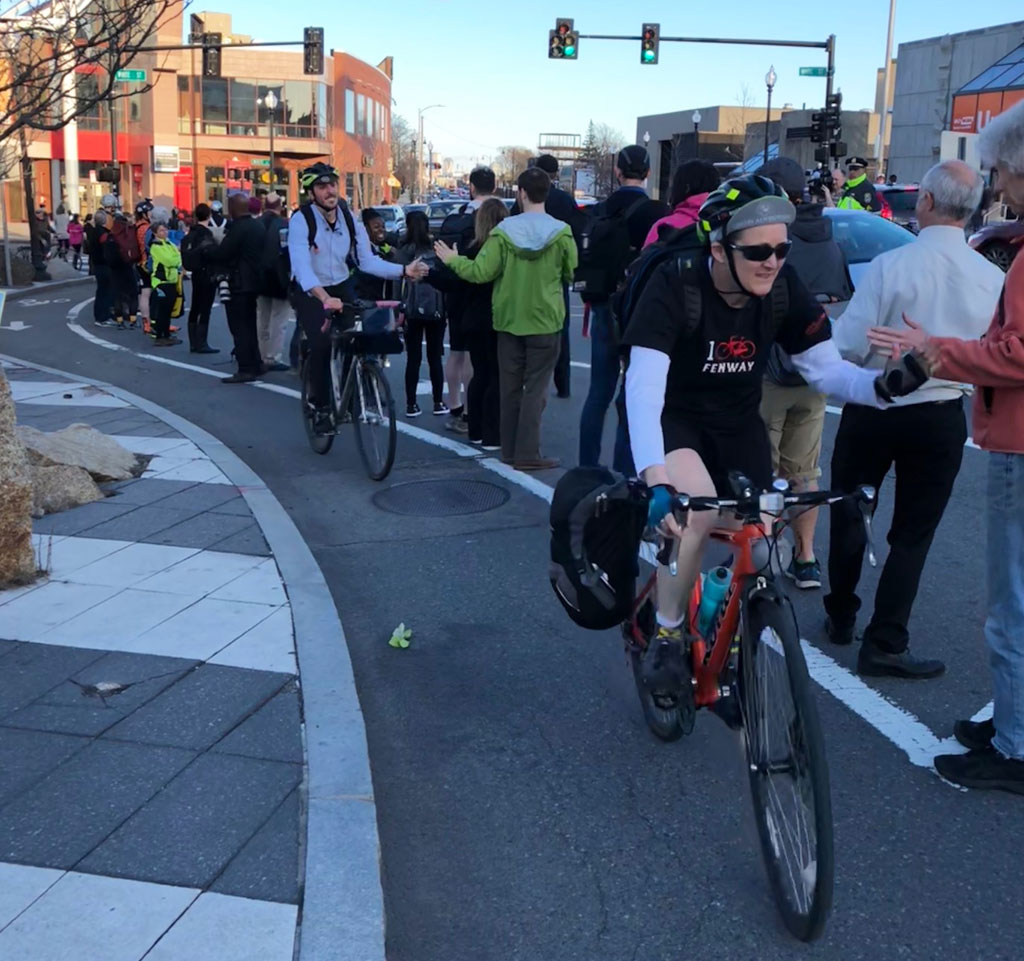 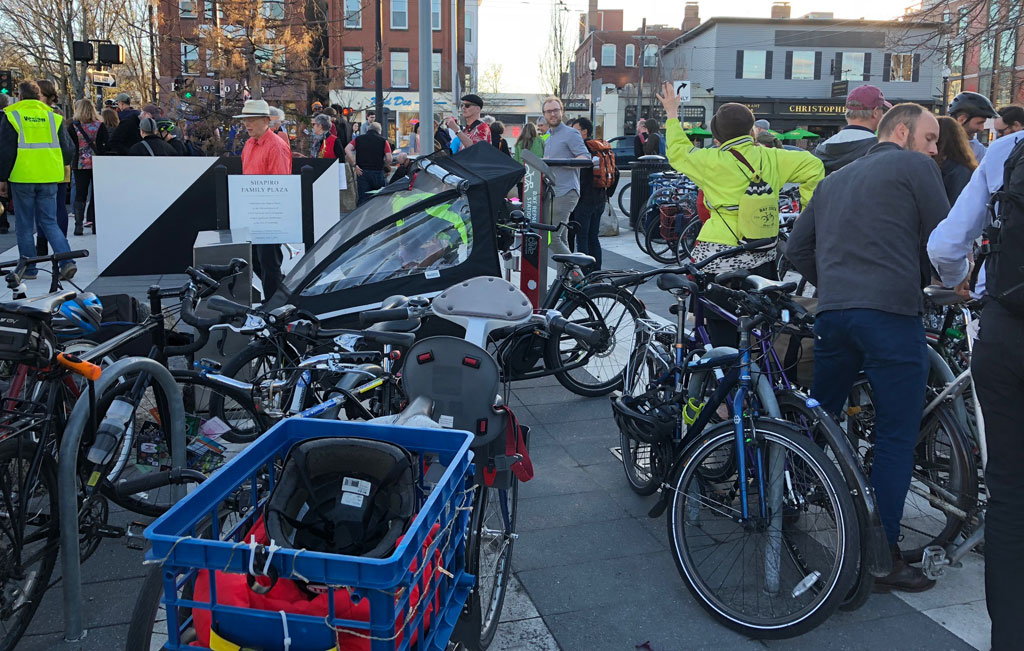 Bicycles and bicyclists mass in Porter Square on Thursday for a rally. Nate Fillmore, of the Cambridge Bicycle Safety group, is at center. (Photos: Tom Meek)

Bicycle safety advocates didn’t crowd City Hall on Monday to support an order for protected bike lanes and bicycle traffic signals in Porter Square because, one said, they already made their feelings known – at a protest held Thursday in the square where two people died in 2016.

“We turned out 200 people on this very topic,” said Nate Fillmore, of the Cambridge Bicycle Safety group, describing to city councillors the crowds, marching band and “people-protected bike lane” that formed to protest official findings that the design of the square played no role in the death of bicyclist Bernard “Joe” Lavins. “This is obviously false. Anyone who walks or bikes through Porter knows how dangerous it can be.” (Lavins, 60, died in October 2016; pedestrian Marcie Mitler, 63, was killed by a car eight months earlier.)

Councillors agreed Porter made for confusing and unsafe travel – councillor Dennis Carlone said he biked there once and never went back – and passed an order calling for the city manager to prioritize bike and pedestrian safety in its changes, adding protected bike lanes and signals where appropriate. The city manager was also asked to continue community outreach efforts to ensure different perspectives were heard; bike safety infrastructure in Harvard Square and on Cambridge Street has been controversial with drivers and business owners, despite Cambridge Street changes getting a more extensive public process.

Approval among the councillors was slowed not just by a call for more outreach and process, but by early opposition from councillor Craig Kelley and others over what seemed to be an incomplete solution. Kelley, focused on a tricky left turn, said, “I don’t know how separated bike lanes are going to address a turning issue here.”

Proponents of the order, which was written by Quinton Zondervan, Carlone and vice mayor Jan Devereux, took pains to call it a “baby step” as the city considered larger changes.

“Councillor Devereux and I went to a neighborhood meeting three years ago now and we were told nothing can change – the curbs can’t change,” Carlone said. “And my first reaction is, ‘Why not?’ When you have one of the most dangerous and busiest intersections in the city, and we have a Vision Zero policy [for zero traffic deaths], that’s exactly where you put the money.”

Cyclists travel in a “people-protected bike lane,” with supporters where plastic bollards could go between cars and bikes, at the Thursday rally.

E. Denise Simmons worried that moving forward on the changes “pit groups of people against each other,” and fellow councillor Alanna Mallon echoed those concerns and wondered if Porter Square was where to focus efforts. When Devereux said months could be spent looking at other locations but Porter was the only place two people had died within a year, Mallon pointed to Putnam Avenue, where singer-songwriter and political activist Marcia Deihl was killed riding a bicycle in March 2015, and where a 14-year-old rider was hurt a block away last month, telling media that “I could’ve died.”

As the conversation became rancorous, with Devereux expressing surprise at the pushback as being “nonsensical” in a city that had adopted Vision Zero and Zondervan saying he was “stunned” at objections – and Kelley responding that it was offensive he might be described as not prioritizing safety – the mayor stepped in.

Accepting a share of blame on behalf of the previous council for a lack of process on Harvard Square bike lanes, Mayor Marc McGovern pointed out that there was a process for Cambridge Street (a discussion of tweaks hasn’t been called because the city is still gathering data, he said) and suggested an approach councillors could take in Porter Square and to think about changes more broadly.

“My plea, to the community as well as to us, is that we say all the time we’re for safety – but every little thing becomes a battle, and it makes me wonder if people are ever going to be able to come together to agree on anything that involves bike infrastructure,” McGovern said.

Changes proposed in Porter Square and other parts of the city “may make it more difficult for me as a driver, but you know what? I’m also terrified I’m going to hit someone,” McGovern said.

Change on the way

Fillmore, the bike safety advocate, expressed relief afterward that changes had been adopted, since even Kelley’s initial concerns about how protected bike lanes help a left turn had an answer: Installing plastic bollards would stop drivers from using the lane to pick up or drop off passengers, which forces bicyclists out of the space they’d use to turn.

But changes may have been on the way even without council debate.

Feedback on Porter Square’s redesign heard at a community meeting in January has changed plans, Zondervan said. In a new design to be shown by the city’s Traffic, Parking & Transportation Department at 6 to 8 p.m. May 8 meeting at Lesley University’s Hall Amphitheater, 1815 Massachusetts Ave., Porter Square, there is some protected bike lane and adjustments to traffic signals to help bike safety.

“And all we’re doing here is giving some extra impetus to say, ‘Please look at this, because we don’t want anyone else to die on our streets,’” Zondervan said.