‘Little Pink House’: After finding her home, she has to fight to keep it from Big Pharma 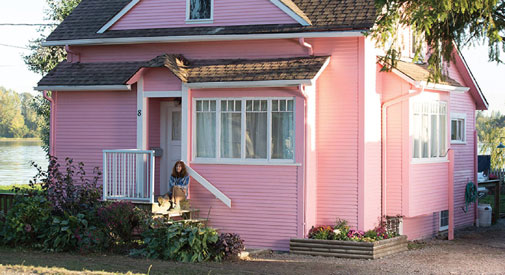 ‘Little Pink House’: After finding her home, she has to fight to keep it from Big Pharma

The title alone will have many thinking of the the seminal John Cougar Mellencamp song that 35 years ago was so ubiquitous and infectious. This similarly named film (“House,” though, not “Houses”) won’t have the same lingering resonance – and rightfully so, as the reedy true-life saga never quite finds its pulse and purpose. Events unfold during a time Y2K concerns soared and 9/11 rocked the nation. Neither of those history-defining moments makes it into the film to detract from the slow-building drama taking place in the sleepy seaside town of New London, Connecticut, not too far from historic Mystic, the anchor port for the taut little comedy, “Mystic Pizza” that in the late 1980s launched the career of Julia Roberts. 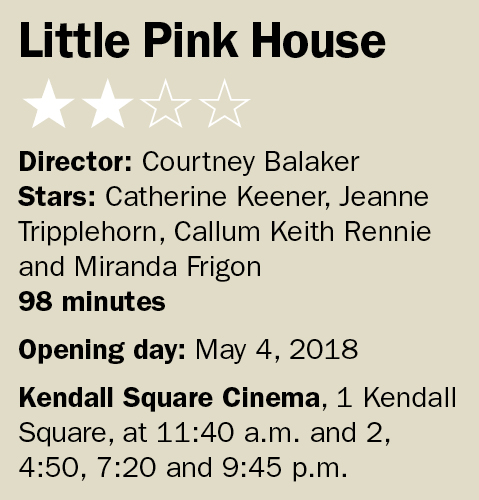 If you’re wondering if any of this seeming free associations has a payoff, it does – sort of – as “Little Pink House” shares the trappings of “Erin Brockovich,” another true-life tale about an iron-willed woman who fights the good fight, taking on bureaucracy and big money against all odds. That 2000 film garnered Roberts a Best Actor Oscar.

The New London of the time, like many of Connecticut’s once prosperous industrial towns, was languishing economically. This gives the Republican governor (Aaron Douglas) a bright idea for revenue and votes: Bring in Big Pharma (Pfizer), rejuvenate a dying Democratic stronghold economically and presto, a win-win – but it’s not quite that easy. Enter Susette Kelo (Catherine Keener, normally so good, but here getting lost in the back and forth of the script), a demurring personality returning to her hometown after a failed second marriage. Quietly she takes solace in her work as an EMT and the small ramshackle cottage she buys, fixes up and paints a stark pink – yes, the title is that whimsical and simple.

Kelo’s also the fly in the good governor’s ointment, as her house is smack dab where Pfizer wants to set up shop. Not wanting to give up on paradise re-found, Kelo and others from the small seaside outcrop known as Fort Trumbull dig in tick-deep and gird themselves for a long eminent domain ground war in court. It’s here – and too early on – that the narrative flounders and begins to take on water, just when it should be revving up. Not only do the underdogs battling titanic forces come off as passive and lethargic in their fight; the direction by Courtney Balaker similarly lacks pop and poke when and where the plot demands it. About the best thing in the muddled municipal melodrama is old friend Jeanne Tripplehorn as the prim and snappy university head (Connecticut College head Claire Gaudiani in real life) dialed in by the governor to run the redevelopment effort, which amounts to arduous backroom politicking and a shakedown campaign. Tripplehorn’s fixer proves a campy distraction and a force to be reckoned with, but not enough to right the ship.

As a kid who grew up in one of those dying towns in Connecticut (despite cinematic depiction, Greenwich is not the state’s everytown) I was riveted by the sidebar regarding an ongoing investigation into the governor’s finances. Could this in fact be former Gov. John Rowland, the man who ended up in jail in the middle of a term for corruption? (The state has been historically plagued by corruption on all levels.) He’s never named in the film, just as Gaudiani isn’t, but by the end, when he’s fielding a phone call from inside a prison cell, there’s no question. Rowland was a pretty popular guy in his time, but got caught constantly with his finger in the till. Not long ago, when I was cleaning out my parents’ house after they passed away, I bumped into Rowland’s wife; she was a partner in a group that helped you in the sad process of purging and liquidating a life’s collection. Turns out the former gov was back in the can. Some people never learn, and audiences are not likely to learn the significance of Kelo’s fight – which ultimately triggered a historic decision. If a struggle doesn’t feel like a struggle, how can anyone appreciate the travail?