Video premiere: See Travels With Brindle do ‘I Want U’ with a dinosaur and ukulele 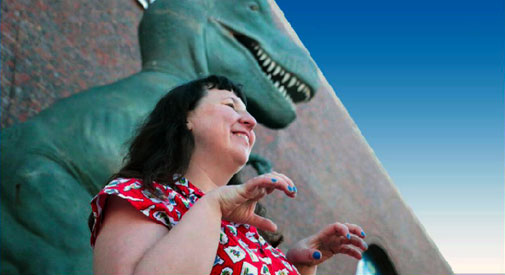 Video premiere: See Travels With Brindle do ‘I Want U’ with a dinosaur and ukulele

The video, directed by Vanessa Mark and shot in Central and Harvard squares, is inspired by Spear’s experiences busking – “You run into a lot of interesting people, folks who maybe need a therapist as well as people who are very enthusiastic about music,” she says – and proves that things go more smoothly with a dinosaur by your side.

Friend and video actor Adam Henry “attracted a lot of paparazzi,” agog children and even some   unsolicited dollar bills with his inflatable dinosaur costume, as “you don’t always see dinosaurs playing the ukulele,” Spear says. The creature also appears on her album cover as both an allusion to Lahey’s cover photo (Lahey chose a sphinx) and a wry comment about herself. “I’m a little bit older than most people who get into busking and writing songs,” Spear says. “If I put the dinosaur in there, it’a maybe a joking way to say,  ‘I know I’m old.’”

But why Lahey at all? Spear arrived at the concept only after stepping away from the album theme she’d been pursuing: songs about famous dogs. Feeling stuck in her own writing, she was instead inspired by Lahey. “My boyfriend had gotten me a copy of ‘I Love You Like a Brother’ because he knows my favorite genre of music is brunette tomboys from Melbourne, Australia, who plays Telecasters,” Spear says. She admired Lahey’s tight songwriting, which is complex without being totally out of reach of her own skills on the ukulele.

And there was something else about Lahey: “She does a lot of covers on her tours. She covers ‘Torn’ by Natalie Imbruglia – she calls it the Australian national anthem, a woman after my own heart – and Avril Lavigne, and other covers of Australian artists. Someone asked her about her covers and she said, ‘It always makes me happy to do covers, because I can learn about songwriting from doing that,’” Spear recalls. “I said, ‘That’s a really good sign.’”

While Spear and Lahey have connected on Twitter in the past, Spear says efforts to alert Lahey and her management to the 10-track “I Love You Like a Cover” have brought only silence. She hopes it’s a result of Lahey’s exhaustion from touring Europe and Australia, where she’s a star, and that a cassette copy of the cover album will be a welcome gift if Spear can get one to her during a House of Blues stand in June with Jimmy Eat World.

“It’s got to be weird if you’re a rising star who’s still a little obscure and you’ve got this woman who’s got a couple of years on you up in New England who’s covered your album. Even if you’re excited about covers and flattered by covers, that might be something where you look at it and say, ‘I don’t know how to react to this,’” Spear says. “I hope that she’s into it.”

Travels With Brindle is set to play Porchfest from 4 to 6 p.m. May 13 (the City of Somerville bumped the event to its rain date) at 75 Columbus Ave., on Prospect Hill near Union Square in Somerville. If you’re a 14-year-old girl she’ll slip in a Grace VanderWaal or Taylor Swift song; if you’re an older dude, get ready to enjoy some old Pretenders (maybe “2000 Miles”); and if you’re like Spear – an “ex-punk girl who might have grown up listing to ’FNX” – you’ll probably get some Pixies.

And it’s pretty sure everyone will hear some Alex Lahey.