‘Mission: Impossible – Fallout’: True excitement from an aging series that knows to keep it real 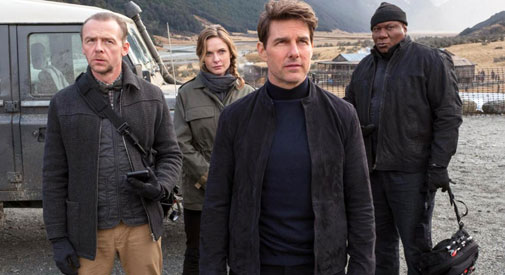 ‘Mission: Impossible – Fallout’: True excitement from an aging series that knows to keep it real

There’s little new or fresh in the latest “Mission: Impossible” chapter, branded way too ominously  for its own good with the term “Fallout” (“Mission: Impossible – Fallout”). Its star, Tom Cruise, isn’t the spry chicken he was in “Risky Business” back in 1982; the television series the film franchise hangs on was a droll, thinking person’s staple back in the 1960s and 1970s; and the stunt work here is mostly old school. These aren’t three strikes, but a gold strike: Blending the three makes for the most exhilarating filmgoing experience of the summer, with Cruise doing most of his own stunts for the painstaking realism – and boy, does it show – and director Christopher McQuarrie choosing to do each crash-bang chase they way they used to when Bill Friedkin was lighting up the screen, eschewing CGI where any “Fast and Furious” helmer would jump in with a dual core processor and a green screen. 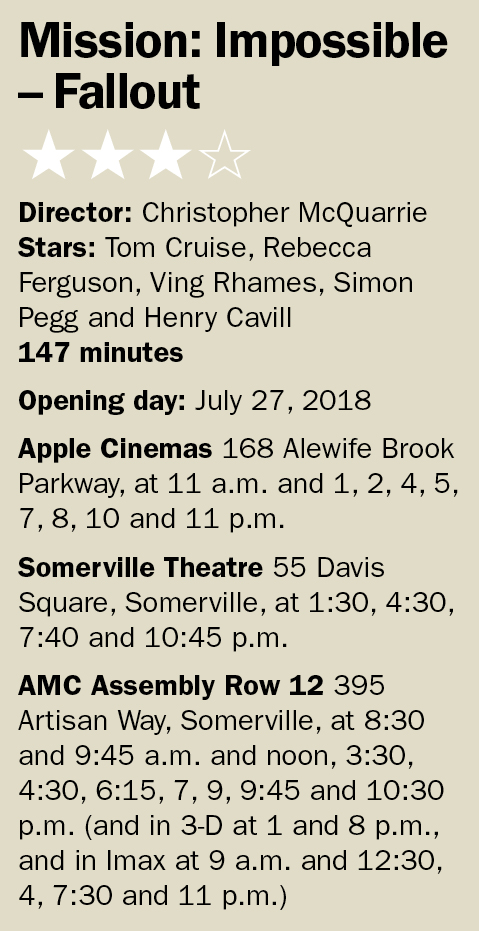 The plot’s not all that much to bite into – there’s three mobile nukes on the loose in Europe and IMF agent Ethan Hunt (Cruise)  feels particularly responsible because he let the weapons out of his grasp by opting to save one of his own crew (Ving Rhames). Because of said misstep, Hunt’s team is given a watchful CIA presence, a strong-jawed slab by the name of Walker (Henry Cavill, who dons the cape as Superman in a different franchise). In Paris and London there’s a sleek assassin on a motorbike (Rebecca Ferguson) tailing Hunt & Co., as well as a racy arms dealer (Vanessa Kirby, from “The Crown”) in the middle who, without batting an eyelash, whips a stiletto from her garter belt to dispatch an onrushing hitman. Oh yeah, Lane (Sean Harris), the anarchist terrier Hunt put away in his last outing, “Rogue Nation,” factors big into the mix as well.

Needless to say, it’s a crowded affair that reaches its crescendo atop sheer precipices in Kashmir, and while that copter-crashing cliffhanger works effectively – if you hate height like me, you may experience a few churns to the gut – it’s not as raw or adrenaline-pumping as Hunt running the rooftops in London to capture quarry, or the smackdown in a Paris men’s room where Hunt and Walker get their asses handed to them by a very able foe. The scenes are so invigorating that when they’re over you need to catch your breath. The film does too, and it’s in these moments that the lines of artifice to get to the next whopper of a stunt show some. You can tell Cruise and McQuarrie, the scribe behind “The Usual Suspects” who’s worked with Cruise on nearly a half-dozen projects, are on the same page – it shows in almost every scene. McQuarrie, an obvious cinephile, layers in a slew of subtle, tongue-in-cheek film references for the enlightened, be it a nod to Rhames’ gimp scene in “Pulp Fiction” or Hunt spouting Cruise’s “crystal” line from “A Few Good Men.” And boy, can he run – and drive, fly and fall. Instead of “Fallout,” the tag for the film should have been “See Tom Run.”