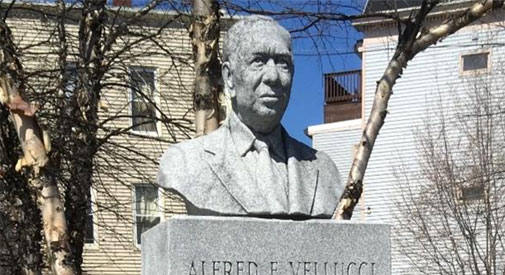 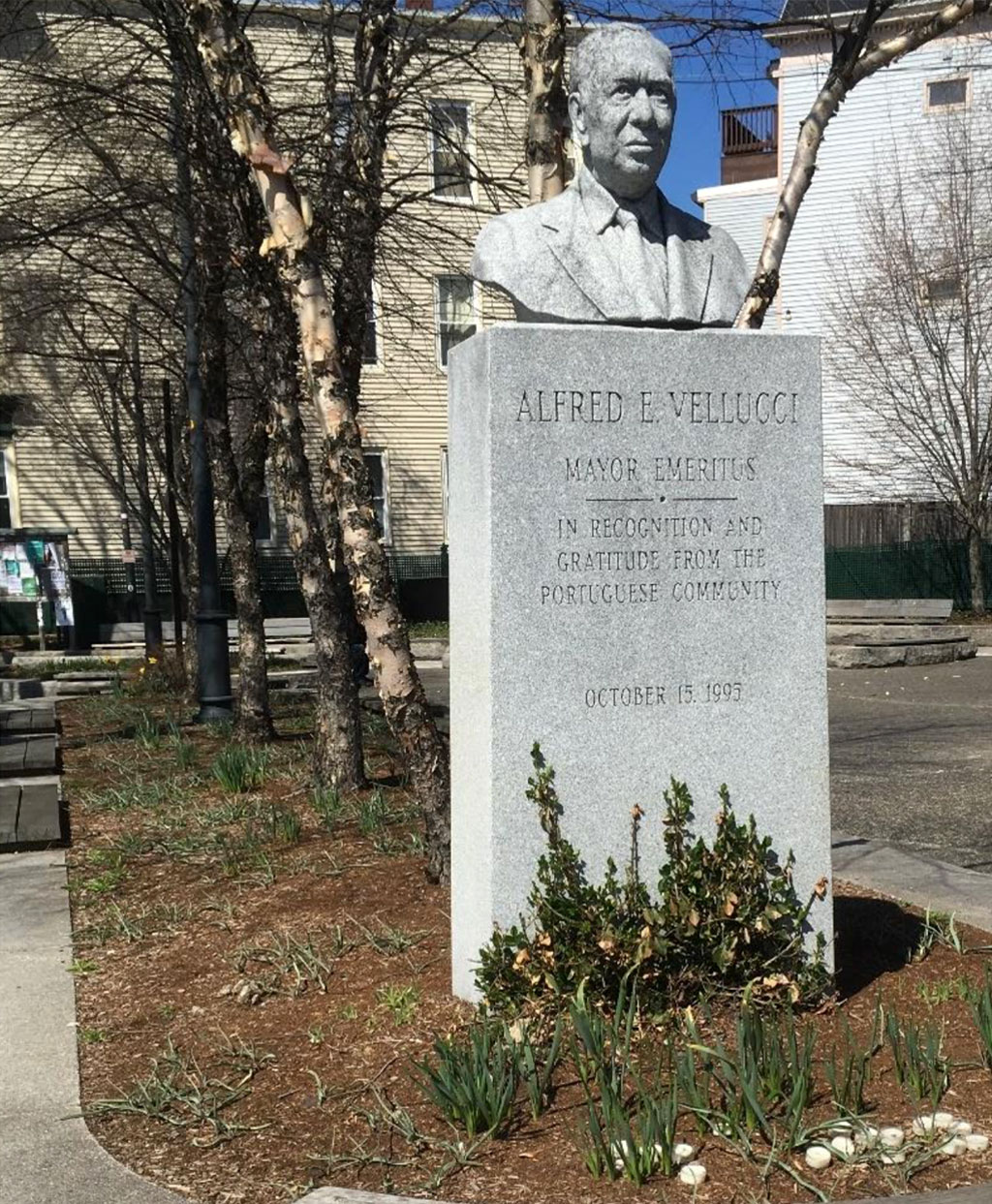 A marker honoring former mayor Alfred E. Vellucci will stay on the west side of Vellucci Plaza in Inman Square after a redesign, city planners have said. (Photo: City of Cambridge)

The home rule petition that lets the city redesign and rebuild Inman Square has been enacted by the Legislature and signed into law by Gov. Charlie Baker, state Rep. Mike Connolly said Wednesday.

The redesign process began with a council order in June 2014, sparking at least the fourth intensive look at a redesign since 1994 for a square long considered confusing and dangerous for pedestrians, bicyclists and drivers. The process gained urgency and attention with the death of bicyclist Amanda Phillips in June 2016, but drew opposition for its plan to shrink the square’s Vellucci Plaza on one side of Hampshire Street so a giant, traffic-bending bump-out could be added on the other side – essentially turning the peculiarly elongated and complex square into two intersections.

The design requires the removal of a few mature trees, and despite onrushing climate change, the city is seeing a loss in tree canopy and other green space that can help handle the accompanying floods and extreme heat.

“It’s disappointing but not surprising that the state Legislature voted to approve the city’s home rule petition to carve up” Vellucci Plaza, said John Pitkin, an opponent of the plan who presents an alternative idea on the Save Inman Square website. “Many neighbors had hopes that the Legislature would use its authority to require equivalent replacement space.”

The City Council approved the request for a home rule petition June 4 in a 6-3 vote – six being the minimum number of votes needed. An appeal three days later to the Historical Commission failed, with commissioners voting 3-1 against a citizens’ complaint that the Mid-Cambridge Neighborhood Conservation District hadn’t fulfilled its role by giving adequate review to the overall nature of the plans, and focused instead on details. That finding let the home rule petition go to the state, where Connolly helped shepherd it through with state Sen. Sal DiDomenico.

Now that the state has ruled in favor of allowing changes, the plan must still come back to the City Council for design and funding approval.

“As an avid cyclist and frequent patron of Inman Square businesses, and as someone who enjoys the Vellucci Community Plaza, I recognize the urgent need to protect our city’s tree canopy and improve safety for all users. Over the course of the past year, I have met on several occasions with a number of interested constituents and advocates on all sides of this issue,” Connolly said in an emailed press release. “I have encouraged all interested parties to make their voices heard at Cambridge City Hall, as I believe the City Council is the legislative body best positioned to render a decision on a local land use matter such as this.”

“I will continue to encourage all residents and concerned parties to work with city officials to consider the best possible way to implement the Inman Square improvements,” Connolly said.

Pitkin said there was “one good outcome of the vote”:

“It gives city councillors and others time to take a good look at the modified alternative plan proposed by neighbors in June. This would work better for most users of Inman Square, including cyclists, than the city’s current plan, at lower cost,” he said, “and would also preserve most of the existing Vellucci Plaza and its trees.”