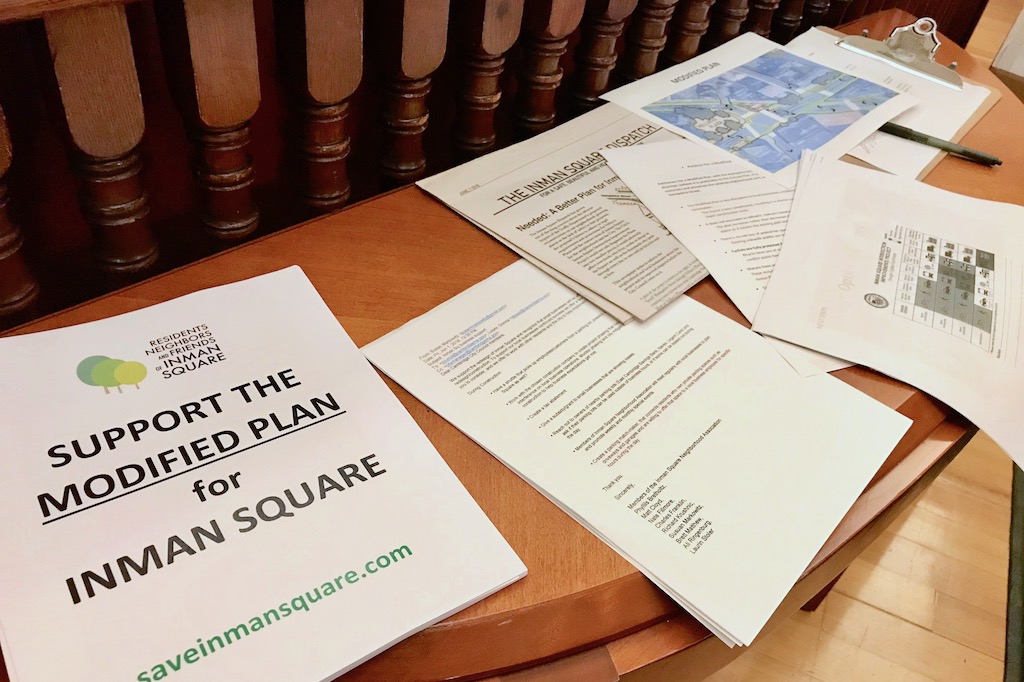 A renewed push for the city to consider alternatives to its Inman Square redesign plan is unlikely to get results, said Joseph Barr, director of the city’s Traffic, Parking & Transportation Department, noting the time and energy already put into the project.

A call to get an engineering analysis of a citizen-designed alternative was one theme of public comment at a Wednesday meeting of city councillor Quinton Zondervan’s committee on Neighborhood & Long-Term Planning – along with the flaws of the current city plan to add bike lanes and a daytime bus priority lane while breaking what Barr called the “chaos” of Inman Square into two better regulated intersections. The plan bends traffic by breaking a park called Vellucci Plaza in two, sacrificing some mature trees.

Environmental advocate John Pitkin cited three independent traffic engineers as saying the alternative plan matched or beat the municipal plan on various goals, and he urged the city to test it for themselves despite the awareness of “process fatigue” setting in. During public comment, resident Sharon deVos said signatures were being gathered to urge a look at the modified petition, and that she was “glad there’s still an open door” for consideration.

But it was unlikely, Barr said.

“We’ve been through a lot of looking at different plans, and we took a step back eight or nine months ago to look at a different plan to avoid impact on Vellucci Plaza. At this point we’re trying to move the project forward to construction,” Barr said after the meeting. “Barring some direction from the City Council and city manager we’re not going to look at this again. I feel like we have a very good plan, and we’re anxious to move it forward.”

The redesign process began with a council order in June 2014, sparking at least the fourth intensive look at a redesign since 1994 for a square long considered confusing and dangerous for pedestrians, bicyclists and drivers. The process gained urgency and attention with the death of bicyclist Amanda Phillips in June 2016. There have been 20 meetings with residents about the plan, City Manager Louis A. DePasquale said. A home rule petition to let the city redesign and rebuild was enacted by the Legislature and signed into law by Gov. Charlie Baker in August.

The next step will be a detailed design that will come back to the City Council for approval, with construction intended to start in April 2019 and take an overall 18 months to two years, with work shifting to different locations around the square as needed. “That’s not construction everywhere in Inman Square for 18 to 24 months,” Barr emphasized. “It moves around and won’t all be happening at the same time. No individual business will have a backhoe in front of their door for 18 to 24 months.”

Several residents, including Pitkin, emphasized how worried they were for the small businesses that might be driven to close forever by the drop in available parking and walk-in traffic driven away by construction. Though city councillor Sumbul Siddiqui said a mitigation plan was being explored for affected small business, residents and even some officials were skeptical. “We have now several examples where this has not worked as successfully as we would all want,” said architect George Metzger, a former president of the Central Square Business Association.

The harshest critic of the plan was city councillor Craig Kelley, an avid bicyclist who has long urged more enforcement of traffic laws and tweaks to existing infrastructure over larger changes such as the installation of separated bike lanes. In stark contrast to the many bicyclists who support the Inman Square plan – represented Wednesday by Becca Wolfson, executive director of the Boston Cyclists Union, and Mark Boswell, of the Cambridge Bicycle Safety group – Kelley said his own observation of traffic patterns in Inman showed changes in signs and lights would likely make the $6 million plan unnecessary. Some simple changes could eliminate turns in the square, and the resulting crashes.

“This is a horrible project, I think this is a dangerous project and I think it should be stopped,” Kelley said. “There is absolutely no doubt in my mind as someone who does nothing but bike and whose family does nothing but bike., who’s been in repeated car accidents, whose family has been in repeated car accidents – cars vs. bikes – that this proposal will make my life and the life of my family members, the lives of those I love the most and the lives of a whole bunch of other people much more dangerous.”

A lengthy critique of elements of the plan by Kelley was answered by Barr (“Wow. All right, ” he began), who explained that some of what the city councillor saw as flaws in the plan would make sense with the cycling of traffic lights working in conjunction with physical changes to the roads and sidewalks at ground level.

Still, councillor Tim Toomey looked like another “no” for whenever the design arrived for a vote, saying “I didn’t sign up for this plan” and voicing doubts, like Kelley, that the price tag would stay at $6 million. The nine-member council needs a simple majority of five members for approval.

Concerns about small businesses, breaking up Vellucci Plaza and whether the plan would work led to some creative alternative proposals from residents.

Gary Mitchell, an owner of the square’s S&S Restaurant & Deli, said his family would pick up the tab to put a traffic cop back on a pedestal twice a day in the middle of the intersection, an idea from “back in time when Inman Square was better.” Another resident proposed an oval track that would go over Inman Square for use by bicyclists, removing them from traffic patterns entirely – it could be made offsite and installed at night with virtually zero disruption to businesses, she said.

Phyllis Bretholtz, who helped found the Inman Square Business Association, at least wanted the city to get creative with its mitigation efforts. Her suggestions included shuttles, highly publicized special events and a “parking matchmaker” program, as well as tax abatements.