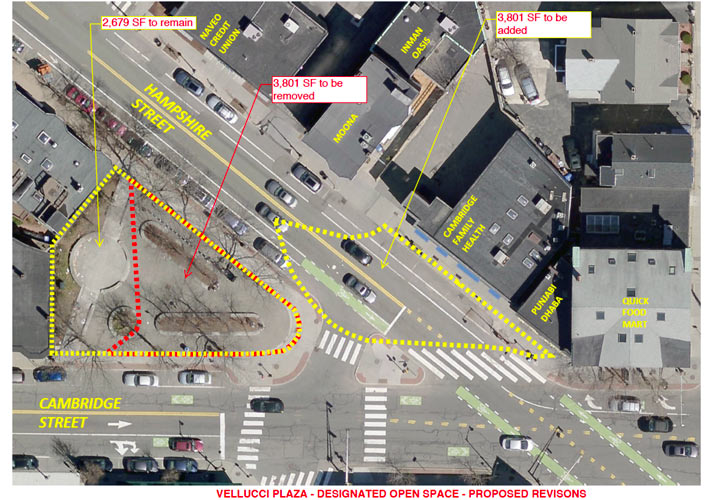 Inman Square has 6,480 square feet of open space in its Vellucci Plaza … (Images: The office of state Rep. Mike Connolly)

… and should end up with 6,480 square feet after a redesign. (Images: The office of state Rep. Mike Connolly)

Details of that redesign are promised a public process. (Images: The office of state Rep. Mike Connolly)

A plan to redesign Inman Square and improve its chaotic traffic patterns with new bike lanes, a daytime bus lane and its Vellucci Plaza broken into two was essentially voted in Monday by the City Council on a 7-2 vote.

Technically, the council adopted a home rule petition from the state Legislature to make changes to Inman Square, but as determined by one of the voters opposed – councillor Craig Kelley, whose “no” vote was seconded by councillor Tim Toomey – “if we wanted to alter the plan to meet someone else’s thought of a modified plan, this petition would not do the trick, and we’d have to get a new one.”

That was confirmed by the city solicitor, and it became the second of a rapid one-two punch to citizens who dislike the city’s redesign plans and have been urging consideration of their own alternate plan.

The first punch was when Mayor Marc McGovern made it clear that people who wanted to see the council judge between the plans (and choose the alternate) were bound to be disappointed by the vote they were about to see. “There will never be a time when both of those plans will be before the City Council to vote on which we like better. That’s not how this works,” McGovern said.

This is the plan

It will likely be Oct. 15 when the city manager asks for an expected $6 million to pay for 18 to 24 months of construction to remake Inman Square, and “we will then have an opportunity to vote that allocation up or down,” McGovern said. “If we vote it up, that plan, which sounds like it will be the city’s plan, will move forward; if we vote it down, nothing happens – it doesn’t mean the alternative plan is going to happen, it means nothing happens.”

Only advocacy from the council and city manager would sway the city’s Traffic, Parking & Transportation Department from the current proposed plan, department director Joseph Barr said last week – and City Manager Louis A. DePasquale affirmed Monday that he believed “the concept underway is the best path forward.”

While the plan will sacrifice several mature trees – city planners say they plan to make up for that with added green space around the square – there is “no loss of open space because of the reconfiguration,” DePasquale assured residents.

As to fears of the damage the months of construction would to do the square’s small businesses,  DePasquale said efforts had already begun on figuring out how to keep that from happening. The city had met just that day with Inman Square business owners to set up a working group. “Some of the things we’re going to do we don’t know yet, but I will try to put something in writing,” he told the council.

“I am not going to lie: During this period there will be some revenue shortfalls on their behalf, and the city can’t make that up with a direct contribution. That’s not how it works,” he said. “I am committed to doing everything we can within state law, when it comes to taxation, to help the business community.”

Much of the assurances were because citizen opposition to the plan was focused on its disruption to the business community; some was directed toward councillor E. Denise Simmons, who has cited her own small-business ownership repeatedly over the past term, telling DePasquale that “two years is a very long time in the life of a business [when it comes to] that kind of disruption” – and that she basically didn’t believe in the working group or mitigation efforts in general until they were “on paper.”

Assuming funding is granted in October, the next step will be a detailed public design process, then bidding by firms seeking the work, with construction intended to start in April 2019.

The redesign process began with a council order in June 2014, sparking at least the fourth intensive look at a redesign since 1994 for a square long considered confusing and dangerous for pedestrians, bicyclists and drivers. The process gained urgency and attention with the death of bicyclist Amanda Phillips in June 2016, but drew opposition for its plan to shrink the square’s Vellucci Plaza on one side of Hampshire Street so a giant, traffic-bending bump-out could be added on the other side – essentially turning the peculiarly elongated and complex square into two intersections.

Inman Square has been the site of five pedestrian crashes, 10 bicycles crashes (including that of Phillips) and 50 vehicle crashes in just the past three years, according to WalkBoston, a nonprofit founded in 1990 that has worked with Cambridge in Inman Square since 2014.