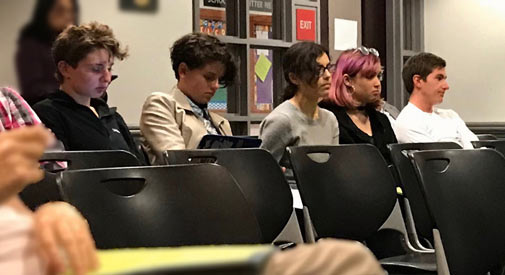 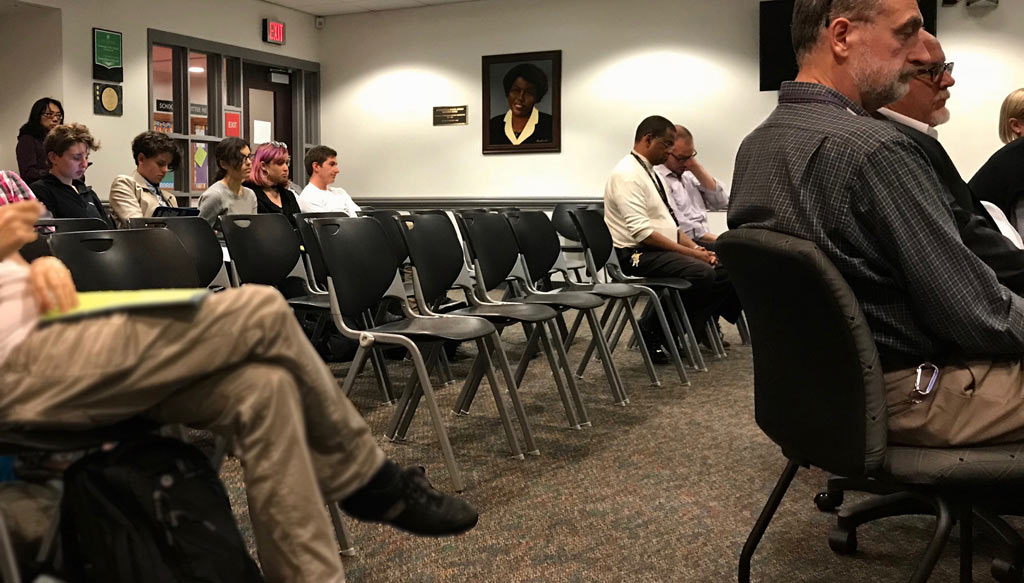 High school students being inspired by democracy in action at Tuesday’s meeting of the School Committee. (Photo: Marc Levy)

The kids got a strange lesson in democracy from the School Committee this week. That the plan they came to protest Tuesday will go forward anyway, or that they may have left feeling unheard, isn’t by itself unusual in Cambridge. But the committee, school district and their administrators really doubled down by showing how little it cared about the total lack of process afforded these citizens.

That is: The grade-by-grade rollout of free Chromebooks to every high school student leaped forward this year to suddenly cover every grade, with only those Chromebooks to be used in classrooms – no outside devices tolerated. This happened without notice, surprising students, parents, media and even School Committee members who’ve attended every meeting on this topic. Where an administrator continues to insist “we communicated,” only very careful observers might have inferred or stumbled across this part of the plan. Administrators who have apologized for the oversight still refuse to compromise the plan in a way that would show respect for their students or democratic process.

Then things got worse, with two committee members engaging in what the students are no doubt learning as the logical fallacy known as tu quoque, but what the rest of us call “whataboutism” – when criticism, instead of being addressed, is deflected by comparison with a different matter. It’s typically meant to shame a critic because they’re focused on what appears to be a less important issue.

In this case, several students who bothered to sit through a School Committee meeting on a Tuesday night to talk about deficiencies in public policy and technology affecting their education were told by members Laurance Kimbrough and Kathleen Kelly that they should be talking instead about such things as the November ballot question on protections for transgender people and the nomination of Brett Kavanaugh to the Supreme Court.

“There are myriad issues that you can take on as a student right now with us as a committee that we’ll be more than happy to address and support that are impacting our democracy,” Kimbrough said, noting that the committee had received no emails from students or parents “about how as a committee or school department we could be addressing [those issues].”

These are serious issues, and students could think about “how education can be used to address” them. Yet the ask here is that students who were just gaslighted through a sham of a democratic process in their own school by their local officials shake off that experience and march forward with the assumption they can make a difference at state and national levels (and that it’s what they should be doing instead of caring about things affecting them directly and immediately).

It’s roughly as reasonable an argument to say that Cambridge School Committee members should be concerned with schools in Cambridge, not about whether the right people are nominated to the Supreme Court. But people can care about more than one thing at a time – maybe the better point is that School Committee members have no cause to expect email about Supreme Court nominations, since students and their families may be engaged in anti-Kavanaugh efforts in any number of other venues, while the committee is essentially the only place they can turn for help with unfair imposition of a school policy.

Chromebooks may be a fine choice for school device, though Cambridge’s generally indifferent record on technology doesn’t lend any confidence that’s true. Equity resulting from every student having the same device is also an admirable goal, though it hasn’t been proven crucial that it happen universally immediately instead of over the next two years (as, it’s worth reminding, everyone thought it would be – including the students who can’t afford their own laptop). It hasn’t even been brought up. The adults just seem to have decided for students from lower-income families that the change must happen immediately.

This wouldn’t happen outside the high school; off campus, officials are assiduous about outreach, engagement and communication, with ostensibly widely publicized meetings about proposed changes numbering into the dozens and policies rolled out with supposed care after a period of adjustment. Remember our ban on smoking in public housing? It was introduced in May 2013, voted on four months later and went into effect in August 2014, with a dozen meetings alone just to tell tenants that the change was coming. That redesign for Inman Square that’s been so controversial? It began in June 2014; more than 20 public meetings later it will get a financing vote in October, with construction not beginning until April. In a high-functioning democracy, changes are never thrust on stakeholders without engagement or notice. None of our officials will argue that we don’t have a high-functioning democracy, yet here we are: It doesn’t apply to the kids. In striking a blow for class equity, we admitted an age-based lack of interest in democratic equity. Lesson learned.

An unasked infantilization is actually the broader problem here. The high school blocks access to Facebook and YouTube on campus and through its devices – apparently not just unwilling to grapple with the inequity that students with their own computers can look at the sites at home while Chromebook students cannot (which means it’s now the district that’s enabling inequity) but electing to do so without even a legal “liability” basis for the filtering. There’s certainly no pedagogical  basis. The American Library Association finds that “over-filtering … affects not only what teachers can teach but also how they teach, and creates barriers to learning and acquiring digital literacy skills that are vital for college and career readiness, as well as for full participation in 21st century society.” It was also administrative lassitude and resistance that kept the student newspaper, The Register Forum, from going online until just a year ago, long after many other school papers. (By way of comparison, Wayland, with its population of fewer than 15,000 and claims of being only “a quiet bedroom community in a semi-rural setting,” got its student newspaper online well over a decade ago.)

It was more than a little cringeworthy when a school official referred twice Tuesday to our “babies” at the high school. But it’s babies that need to be protected and nurtured without a say in how it happens.

Our school officials talk a lot about how much they respect the students, but mania for a theoretical instant equity has given cause for students to see it as nothing more than lip service. The students are in better company, though: Democratic process got the same treatment.