‘First Man’: Humanity makes it to the moon, discovers it’s outshone in a chilly space epic 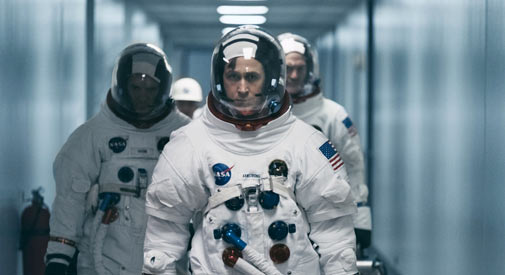 ‘First Man’: Humanity makes it to the moon, discovers it’s outshone in a chilly space epic

Landing on a chilly, emotionally distant atmosphere, director Damien Chazelle strikes for the heart but misses with his “La La Land” follow-up “First Man,” which focuses on astronaut Neil Armstrong and a NASA mission to the moon amid the space race of 1961-69. The film is technically astonishing, with clear and expansive cinematography and sound design and a musical score that pushes the boundaries of how we experience film and how evocative sound can be. But from the start, when we first watch Armstrong soar above the crowds in a rickety box of tin, to a closing where the film tries to shoehorn in an emotional connection, there’s always the sense of something missing. “First Man” doesn’t falter due to skill, but from a failure to connect the audience to the film with anything that isn’t pure sensory overload. 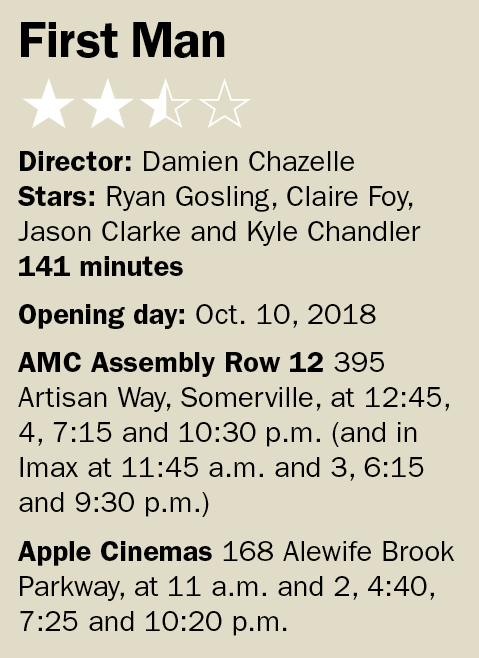 Ryan Gosling’s patented stoicism has been used to better effect – his astonishing performance in last year’s “Blade Runner 2049” being an example – and here it relies too much on silence and stagnant dialogue. His prim and composed character is defined more in costuming than in performance; similarly, Claire Foy (best known from “The Crown”) gets one scene-stealing moment and otherwise does as well as the script allows as “strong, supportive wife.” Kyle Chandler, in a peripheral part, does just enough to hint at just how well he might’ve done had he been given a character rather than a plot mover to play with. All of this makes sense when casting our eyes at a script in which screenwriter Josh Singer and Chazelle don’t so much see Armstrong as a formidable figure, but rather as a dutiful and curious explorer of the unknown. With each appearance the moon grows larger and larger, until the history-making moment when it nearly dominates the screen, but what we hear meanwhile is didactic (in fact, nearly robotic) dialogue.

Chazelle tries to rectify this with a scene alluding to Armstrong’s daughter – who died young – in the final 20 minutes; at the core of “First Man” lies a moving tale of grief, progression and the need to let go, if not forget the past, even if it means traveling beyond our own atmosphere for that release, to simply be with the deafening silence beyond, with labored, echoing breaths as an only companion. Only then can the character say goodbye. The film flirts with the idea that the world is too small to contain the overwhelming grief Armstrong carries, that it will take seeing how vast the universe is, how terribly, tragically and beautifully small we are, to process a loss that in and of itself was the end of a universe.

But it’s a move that’s inadequately set up, and it flounders.

What “First Man” lacks in emotion it makes up elsewhere; it’s one of the most immediately visceral films of the year. The cinematography by Linus Sandgren, along with Chazelle’s camerawork, plays to dazzling and dizzying effect, using space so it takes until Armstrong’s first, iconic step until the sense of claustrophobia relents. Adopting a handheld style that rattles the screen over the course of this epic, the visuals are consistently stunning, evocative enough that there’s an argument to be made that even more silence might’ve been key in creating the timelessness the filmmakers were chasing.

The standout (as is becoming customary with Chazelle films) is once again the score by Justin Hurwitz, who, along with a large ensemble orchestra, used older technology to terrific effect – theremin, Moog synthesizer and vintage sound-altering machines such as Leslie speakers and Echoplex. The results are haunting, with each scene growing that much more memorable because Hurwitz understands how transformative music can be.

“La La Land,” for its faults, was a success because of its ability to marry gorgeous visuals with heartfelt storytelling. It’s a shame the story in “First Man,” which on paper should be effective, is overshadowed by the film’s colder aspects. Chazelle’s versatility and skill is on display, a step forward in an already formidable career, but there’s always the inescapable sense we’re seeing only half of what the film could have been.