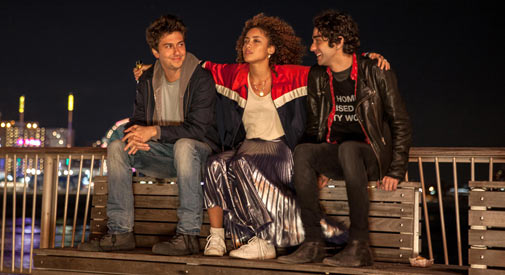 Opening this week exclusively at “bargain deal” Apple Cinemas in Fresh Pond is “Stella’s Last Weekend,” a curio of a movie that, while not exactly fully formed for the big screen, keeps the viewer involved throughout. The “Stella” of the title isn’t anyone as rich as Tennessee Williams’ delusional grand dame, but a furry four-legged beast and perhaps the most regal and kind entity drawing oxygen in the film. Stella’s a squat, salt-and-pepper pit bull mix with a tumor large enough to ensure she won’t make it through the weekend. The growth’s been known about for some time and Stella, as we’re told over and over, has been such an integral part of the family that there’s going to be a weekend passing party for her. That’s why Jack (Nat Wolff) returns home from college. On the way back to Queens he spies a comely young woman across the subway platform (Paulina Singer). They make brief yet intense eye contact – and that’s it, neither acts; only regrets. Until Violet shows up at Jack’s door for a date with his younger brother Oliver (Nat’s real-life bro, Alex). 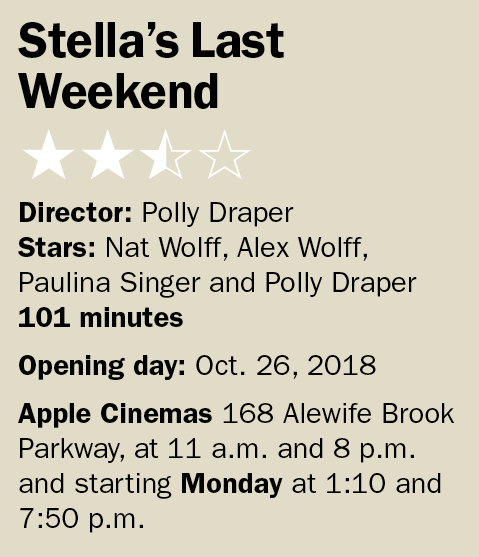 A love triangle blooms, with Violet seeming attracted to both and conflicted, but that’s the least intriguing aspect of “Stella’s Last Weekend.” What’s more interesting, in a sadistic, train wreck sort of a way, is the lads’ antagonistic relationship with their mom’s live-in beau, Ron (Nick Sandow) making fun of his combover and asking pointed questions about their mom in the “sack.” These testosterone-propelled puppies when in pack mode are hyenas, soliciting random senior women on the street for sex advice and so bold as to drop the B-word at a formal affair. They’re loose, shaggy-headed dudes, and you get their pent-up sexual energy, but in motion they’re class clowns. Thankfully, the script – written and directed by ubiquitous TV actress Polly Draper (“Thirtysomething” and “The Good Wife”), who plays mom and is the Wolff brothers’ mom in real life – imbues the boys with vulnerabilities and injects moments of doubt and reflection. It’s in these moments that the film finds a pulse and Draper, as the slightly progressive, neo-hippie Sally, brings a matronly gel to the all-too male homestead.

Draper and her sons were also all part of Nickelodeon TV show “The Naked Brothers Band” back when Nat and Alex Wolff were tweens. Since then, Alex played Boston bomber Dzhokhar Tsarnaev in “Patriots Day” and an incarnation of the dark prince in “Hereditary.” He’s not given as much to work with emotionally as his brother, but the actors find a nice, brotherly balance when the film’s not playing for sitcom-esque laughs. Singer’s fine too, but like Alex Wolff, her performance feels less finely tuned. Smartly, the film makes nothing of the fact that Violet’s black (and the boys are white). It’s there on the screen, but it’s not. Throughout it all Stella breathes heavily and looks occasionally sad. The five-second cutaways to her heavy weariness carry the most weight, but no one on screen seems to notice. Like Stella, we observe and shake our head at the silly human folly unfolding before our eyes.