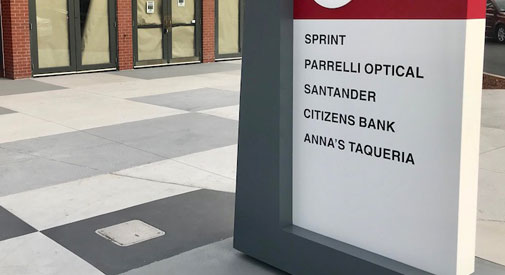 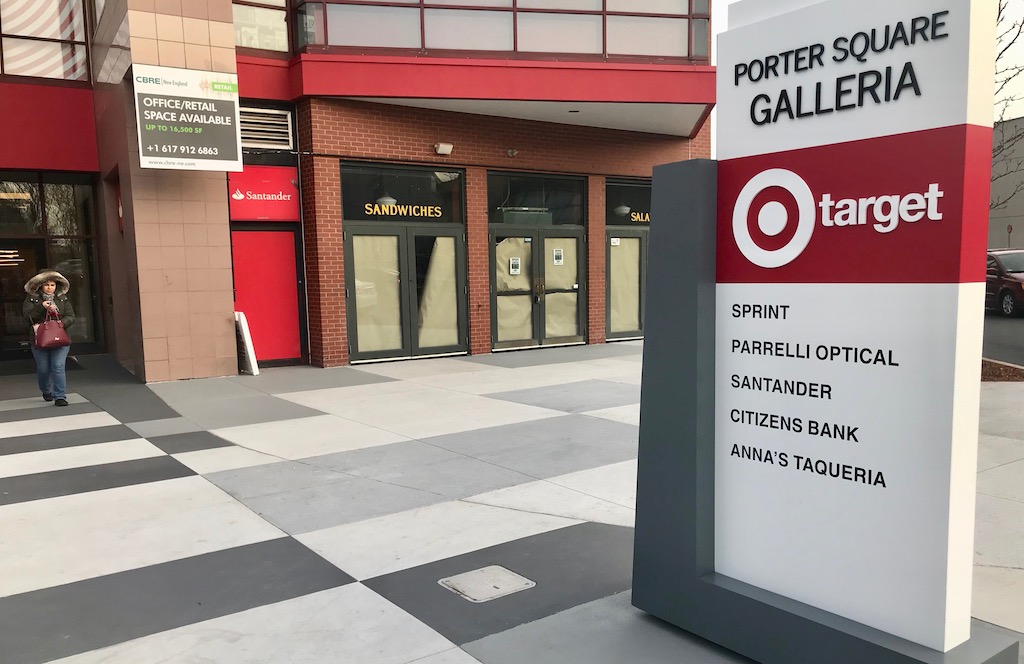 A recently installed sign at the Porter Square Galleria announces a Citizens Bank that has not been announced or confirmed by property managers. (Photo: Marc Levy)

This is exactly what no one needs – because the square already has offices for Cambridge Savings Bank, Webster Bank and Bank of America within a couple minutes’ walk, with East Cambridge Savings Bank, USAlliance Federal and a Cambridge Trust not much farther, as well as ATMs for Citizens Bank in the Star Market and Santander at the Galleria itself – making for financial institutions so close that they’ll be sharing a wall.

Also because Citizens Bank already has giant offices in neighboring Harvard Square and Davis Square in Somerville, and spending a ton of money to fill a one-stop gap on the red line should worry customers about how fees are being used more than it should induce people to sign up. This vanity branch will be of most use to people who never leave Porter Square but cannot find satisfaction at any of its existing half-dozen local and national, small and large banks and credit unions.

So the Galleria making room for Citizens Bank is the best move since it threw out Pier 1 Imports to make way for a redundant Walgreens, which left a prominent, two-story blank for more than three years after defeat in a sad, several-month challenge to Star and CVS.

The reason no one wants more bank branches taking up lots of prime, ground-floor real estate, especially around T stops (aside from an increasing uselessness as more transactions come through phones and the Web) is that they activate streets poorly even when open, but leave streets dead when closed at nights and on weekends. This is also the reason the possibility of a bank leasing space is used as extortion by property managers who need to go through community processes for other uses, such as pizza joints.

CBRE hasn’t checked in with either the Porter Square Neighborhood Association or North Cambridge Stabilization Committee, according to officials at each group – but wouldn’t if it just wanted to cash checks instead of build a community responsibly. “Would we prefer a more active use? Of course,” said Ruth Ryals, president of the Porter Square group.

And so would literally anyone, including the owners, managers and guests of the three new hotels with 150 rooms coming to or already open around Porter Square, which has several dining and drinking options, but entertainment options limited to: Toad.

That’s right, the square has a single spot for creative nightlife, the tiny Toad bar and music hall, and some primarily daytime options that might count as entertainment – meaning shopping that includes a bookstore hosting some readings and an occasional open mic poetry night. (Bonus: Newtowne Grill hosts a trivia night.) Asked what they tell hotel guests looking for fun, Porter Square Hotel desk clerks say that they tell them to go somewhere else.

CBRE should break its lease with Citizens Bank, if it’s actually a thing, and find a tenant who wants to bring fun and energy to the area – installing some pool tables or other games, or stages for bands, comedy, more poetry and black box theater. And this doesn’t just go for the Galleria, and it doesn’t just go for Porter Square. Instead of boring our residents and guests away to other, more vibrant spaces, maybe we should think about what a community needs to serve our interests from the time we wake up Monday to the time we go to sleep Sunday.

That’s not a ninth place to see what’s in our checking account.