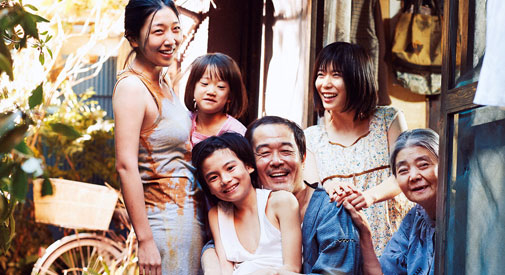 “Shoplifters,” directed by Japanese filmmaker Hirokazu Koreeda (“After the Storm,” “Still Walking”), offers a master class in subtle character building. Its grace presents itself in confident silence, with power in gestures. In “Shoplifters” every truth builds on secrets, and moments of hope tremble precariously over defeat. Koreeda never lets his characters or audience forget there’s no possibility for “more” without the chance of loss, and grounds his tale in shocking reality. 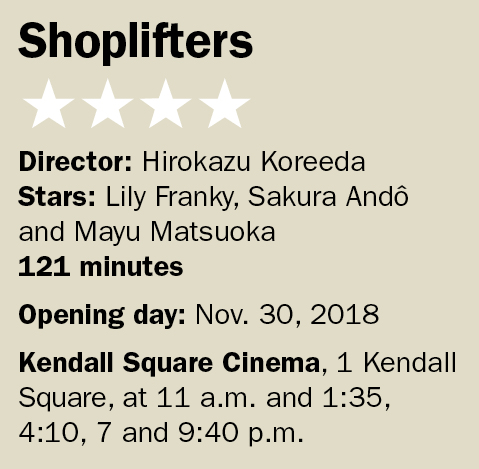 Koreeda is no stranger to depicting strained familial dynamics. The most beautiful art in his movies stems from the in-between moments that make life so enriching. In “Shoplifters” we get plenty of them, following a ragtag family who work odd and dead-end jobs while stealing here and there to make ends meet. One day, patriarch Osamu and his son Shota (Jyo Kairi) stumble upon a girl showing obvious signs of abuse, and adopt her unofficially into their patchwork team. While the family lacks stability it is, at least on the surface, happy. While Shota’s mounting conscience and developing independence begins to turn the tide of the family’s relative peace, unearthing with it deeper and darker secrets that threaten to uproot an already tenuous family dynamic, it’s the young girl, Yuri, that drives the film. We look on as each family is charmed and won over by her politeness and timidity, and as the warmth bestowed upon her by each strengthens their bond.

Koreeda, with cinematographer Ryûto Kondô, finds beauty and universal shared truths in the simplicities of life. In “Shoplifters” this comes in the form of fireworks, where the characters crane their necks outside their house to peer at a show they can only hear, their faces illuminated by nothing more than the lamps adorning their home. The camera never pans away to the fiery show; it allows us to watch the family taking pleasure in just the sound of something exciting, asking us to use other senses to help build the bigger picture. These small moments are shot with the same level of energy as big, declarative ones and add up to a collage of humanistic images that would feel straight out of a dream if not for the fact that reality is exactly what bolsters their impact.

Early in the film we learn Osamu tells Shota that what is in a store can’t technically be stolen because no one owns it yet. We can see how he similarly justifies taking in Yuri – rescuing, in their eyes – because to them she was a young girl alone on the streets. It’s from this that the story latches onto one of Koreeda’s strongest and longest-running themes: the concept of family, particularly the ones we create for ourselves versus the ones we’re born into.“Shoplifters” becomes so much more than its barebones plot could be in the hands of a lesser filmmaker. Everything presented here is familiar in essence but not in outcome, with painfully real twists leading us to awake the next morning emotionally hung over from the hole left by this seemingly unassuming and precious slice of life. Like the embrace extended by the shoplifters to Yuri, the film lures in viewers with a sense of security that is always too good to last.

Lily Franky, with his smile lines and everyman charms, is delightful as patriarch Osamu, perfectly charismatic in one scene and letting in hints of selfish manipulation in the next. Sakura Andô as his wife, Nobuyo, has perhaps the greatest character arc of the film, peeling back layer after layer of a woman who has long built herself into the role she believes she deserved, forgoing self-care and love for a diligent fighting spirit and self-defensive humor. The entire cast is phenomenal, with a lived-in chemistry that speaks earnestly to a unit that shares space with little to no privacy and walls that are suggestions rather than dividers.

“Shoplifters” presents a mighty story of connection, lost dreams, found homes and forced hope in an intimate package. Koreeda’s nuanced storytelling and his performers’ effortless ability to draw viewers in make the film a cornerstone piece of cinema. Positioning itself to see the world from the shoulders of its tiniest heroine with big, absorbing eyes, taking in the plights and possibilities of the world at large, it juxtaposes that wonder with an adult’s weary wisdom. “Shoplifters” knows where its characters are going, but it never stops the audience from wondering whether there’s more.