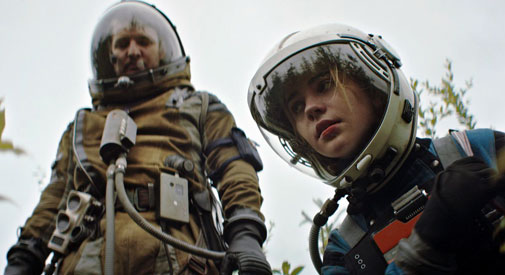 A deep space mission to harvest something called Aurelacs – a highly valued gem that grows in slimy organic sacs that would make David Cronenberg proud – goes horribly wrong in “Prospect,” stranding a father-daughter team in a future where space travel across galaxies is relatively common. Made arty and moody by rising filmmaking duo Christopher Caldwell and Zeek Earl, expanding on their 2014 short of the same name, the themes and atmosphere echo that of “The Martian” (2016), “Interstellar” (2014) and even “2001: A Space Odyssey” (1968) – if not for the retro space suits, then at least all the heavy breathing. 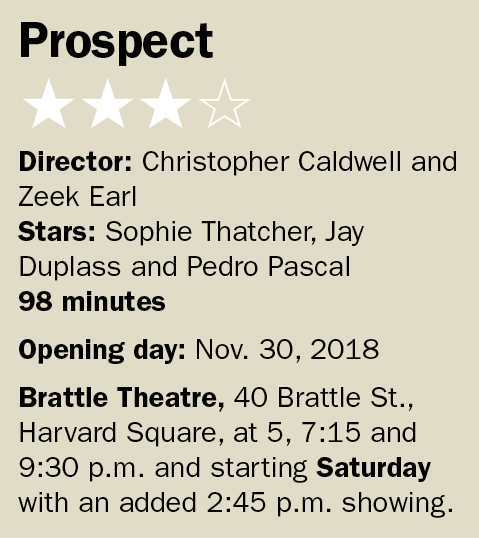 Pulling from familiar tropes, the landing party (descending in a neat little capsule that looks something like a lunar module or whatever it was Matt Damon cruised in on in “The Martian”) hope to make one big “prospecting” score and move on to a better, less perilous lifestyle. Dad (Jay Duplass, co-director of the 2006 indie surprise, “The Puffy Chair”) and his teenage daughter, Cee (Sophie Thatcher, the film’s revelation) descend on a bucolic planet that’s as verdant, dank and lush as the Pacific Northwest forests were in Debra Granik’s “Leave No Trace” this year – still, as gorgeous and inviting as it is, you need to be suited and with a full tank of oxygen.

Funny, as far out as they are and in the middle of nowhere, they barely get started on their quest when they bump into two malcontents who prove none too welcoming. Shortly enough, Cee and the one named Ezra (“Game of Thrones” actor Pedro Pascal) set out to find the the Aurelacs  mother lode (aka the “Queen’s Lair”), despite the nagging matter that Cee’s lander has malfunctioned and Ezra and his cohort have no means off the planet either. For all the riches to be had, folk seem too intently focused on it despite the looming dilemma that there’s no way to realize the spoils.

You could think of “Prospect” as something akin to this year’s unheralded “The Sisters Brothers,” in which the gold at the center of the quest is little more than a MacGuffin and the characters sail through a lawless terrain with nothing but themselves to rely on for salvation or justice. There’s other beings, mostly human we assume, that Cee and Ezra encounter along the way, including a dominatrix who gets her charges on their knees by blasting distorted disco rhythms into their helmets. It’s a weird world to wind up not-so alone in, and given greater impact by tight, intimate camera work.

Beyond Thatcher, who pulls the film along the way Anya Taylor-Joy did “The Witch” in 2015, the best part of Caldwell and Earl’s collaboration becomes the hellbent “Godot”-esque mission to nowhere. If you caught “Annihilation” earlier this year, you’d have a pretty good idea of the psychological fabric as the normal plunges headlong into chaos. “Prospect” also moves in bends and inflections that are largely – and pleasantly – unpredictable. Sure, it’s odd that folks amid an evergreen paradise can’t breath the air except in unseemly yurts, but “Prospect” rises on character, mood and a derivative tang that glances just off the penumbra of homage and avoids shameless lifting.