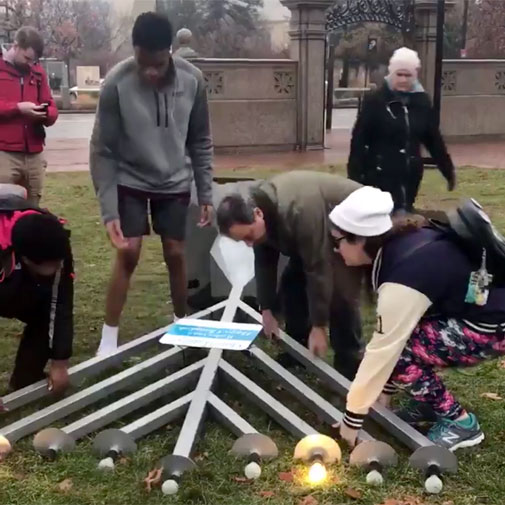 Walking past Cambridge Common today w @itsmejono, we saw the park menorah on the ground. 2 young women had witnessed a young man on a bike push it over with intent. We gathered some strangers to help us put it back up. Then the older, Jewish gentleman said a Hanukkah prayer. pic.twitter.com/dm5oX0aX0I

Police are investigating whether the toppling of a menorah Sunday in Cambridge Common was a hate crime, but the office of Mayor Marc McGovern sent out a statement Monday decrying the act.

“What might otherwise be described as a random act of violence fits into a chilling and all-too intentional pattern of hatred and bias-motivated violence that is visible at the national and local level,” McGovern said.

Around 3:30 p.m. Sunday, two young women near the menorah saw a young man on a bike “push it over with intent,” said Lillian Milagros, a passerby who posted on Twitter about what followed: “We gathered some strangers to help us put it back up. Then the older, Jewish gentleman said a Hanukkah prayer.”

The menorah is a candelabrum used on the holiday called the Jewish Festival of Lights, which runs over eight days to commemorate the rededication of a temple in ancient Israel – and roughly in parallel with the Christian holiday Christmas. The city puts up the public menorah similar to how it puts up Christmas-themed decorations.

It struck McGovern that the video Milagros posted showed the group of helpers to be young and old, black and white, men and women.

“This incident does not represent Cambridge or its people,” he said of the young bicyclist’s vandalism. “The response to that incident as captured by an onlooker does – taking action with a commitment to kindness and community that did not need to be spoken and comes naturally from our neighbors.”

Also on Monday, the Harvard Chabad chapter invited the community for a public candle lighting at 5 p.m. Thursday at the Cambridge Common menorah as well as making a special invitation, also via Twitter: “We would love for all those who helped to restore the menorah to join us as lamplighters,” the organization wrote, thanking them for having “helped restore the light of the [menorah] with love, vandalized by darkness and hate.”

Complete hate crime figures for 2018 were not immediately available from police. As of early December, there were 17 crimes – including the menorah incident – that may potentially be classified as hate crimes, said Jeremy Warnick, director of communications and media relations for Cambridge police. That’s potentially higher than average.

In the past few years, the city was seeing a standard 12 to 15 hate crimes annually, according to police statistics, until a surge in 2016 – the year Donald Trump ran for and was elected president – to a high of 25. Last year, that dropped to nine hate crimes recorded by police. “There have been fluctuations in recent years, ranging from a low of seven in 2010 to a high of 25 in 2016, with the average across the past 10 years being 13,” is how the annual police report for last year described the trends.

At least five examples of swastikas and other hate speech were found in Cambridge Public Schools around the time of Trump’s election – like the act against the menorah, crimes likely committed by young people.

“Little more than a month has passed since myself and other leaders from Cambridge’s municipal and faith communities came together in vigil for the victims of the shooting at Tree of Life Synagogue in Pittsburgh. We vowed then to speak out when we see racism and anti-Semitism, and to work toward the goals of peace and social justice as a community united,” McGovern said, criticizing “national leaders and outlets [that] serve as platforms for supremacist and nativist ideas, whether passively or actively. That their rhetoric gives way to violent acts is predictable and unacceptable.”

Neither the city nor the U.S. Census tracks religious affiliation, but Brian Corr, executive director of the Cambridge Peace Commission, pointed to a Pew Research Center figures that estimated in 2014 that 4 percent of Greater Boston’s population identified as Jewish.