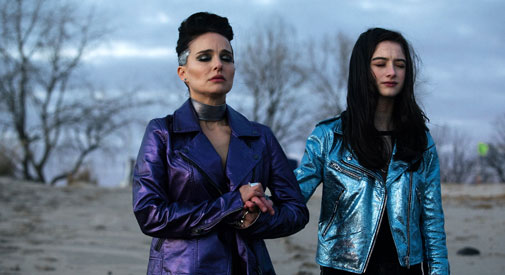 Bradley Cooper’s not the only Hollywood A-lister this year to challenge his acting chops by playing rock ’n’ roll (well, country) royalty on screen. Here comes Oscar winner Natalie Portman as some kind of a Lady Gaga-esque incarnation in Brady Corbet’s rise and rebirth pic “Vox Lux.” The film’s a curio, unconventionally told in two stark chapters the way Stanley Kubrick’s great Vietnam dissection “Full Metal Jacket” did in 1987 – though it must be stated that similarities between the two disparate films begin and end there. 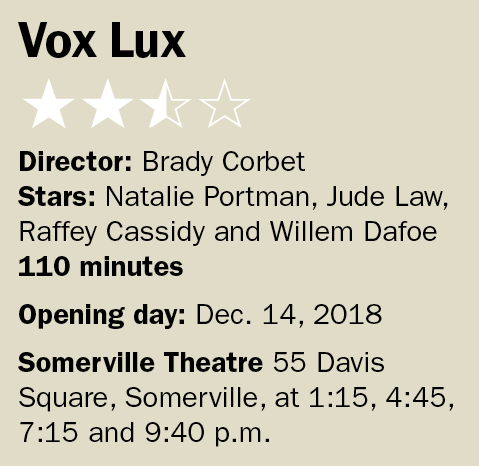 In the first chapter, a lithe and angular teenager by the name of Celeste (Raffey Cassidy, nothing short of amazing) survives a school shooting – she’s shot in the neck but is pretty much the only one who makes it out of the room – and composes a song with her older sister Eleanor (Stacy Martin) to get her heart around the ordeal and come to terms with the pain and trauma. They perform the tearjerker before their small-town crowd gathered for healing in the local church; since this is clearly modeled after Newtown (and Columbine, for that matter), cameras and the national eye are there. Not long afterward, Celeste’s got a hunky manager (Jude Law) and a European tour. Her music – hip, alternative pop songs like a haunting blend of Britney Spears and Fiona Apple – soars critically and commercially, but the violence of the day that gave her lift still lingers in traumatizing wafts. The tatted rocker she beds down with one night plays the kind of music the shooter liked.

Celeste gets pregnant, 9/11 happens and we jump to 2017, with Celeste now played by Portman and, as a neat parlor trick, her teen daughter Albertine played by Cassidy. Through it all, the hops in time, there are eruptions of senseless violence (though far less graphic and viscerally felt) and the ebbs and flows within Celeste are put into context by an unseen narrator voiced with cagey wisdom by the increasingly ubiquitous Willem Dafoe. In this chapter, Celeste is far less likable or empathetic; she’s become something of an entitled diva, dropping thoughtless bombs like those Lena Dunham has become notorious for. Sure, she’s taxed and fearful of failure on her comeback attempt – and wants so desperately to connect with her daughter – but you ask yourself what happened to that precocious, reflective lass from chapter one. Is this what fame and fortune does? The backstage ramp-up to the big concert event is a kickass trip, even if the actual show pales by comparison, Portman is game and the direction by Corbet, along with intimate camerawork by Lol Crowley, is tight and well focused. The film manages to get its finger on the pulse of the music world and the egos involved as well as the toll it can take, but somehow in its angling for something more, something else, it lose sight of the 14-year-old survivor that gave it birth.

There’s a lot to drink in. “Vox Lux” is a haunting mashup you can’t avert your eyes from, except maybe when Celeste is having a diva meltdown on her daughter, sister or manager. One of the film’s key undercurrents – that it’s important to remember where you came from – seems to get lost along the way. Corbet, relatively new to the director’s seat, becomes obsessed with the power and pomp of pop. There’s plenty of kinetically catchy tunes (by Sia) belted out as Celeste triumphs, but many families from many sad days no longer have daughters to take a shot at “American Idol.”