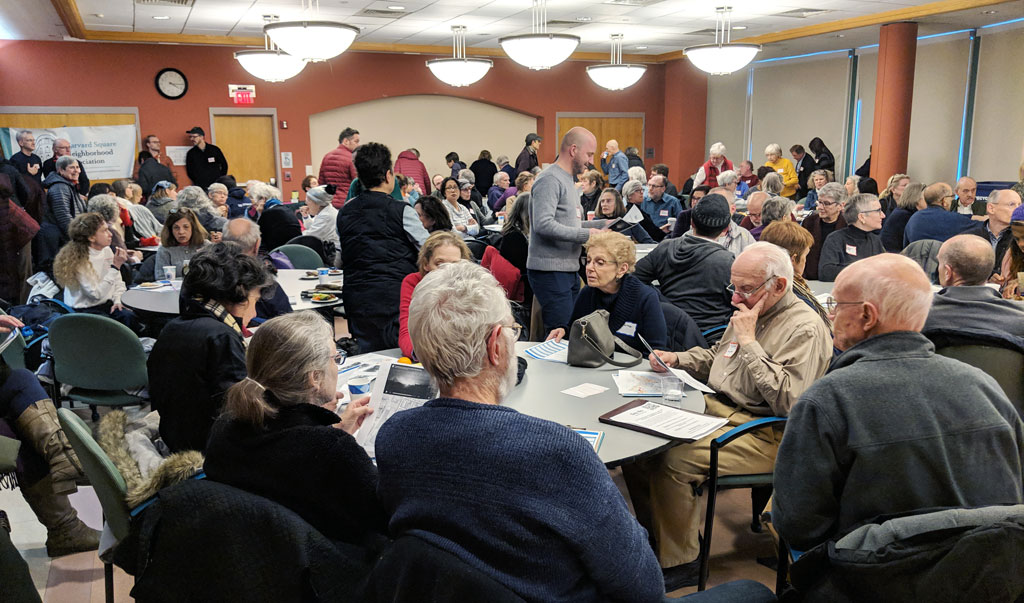 Though affordable housing was the most talked-about topic at Saturday’s “How Big is Too Big” public forum, it was climate issues – the environment, trees and parks – that were identified as Cambridge’s top priority by vote of participating neighborhood groups.

Close behind, tied with seven votes each from neighborhood group, were the topics of “sustainable planning/development” (including zoning and questions of the pace and size of development) and “quality of life” (seeing some overlap with climate issues, this covered concerns over parks and open spaces, light and noise, garbage, street drugs, homelessness and a diminished arts scene).

Housing, as its own topic, was officially third tier – tied with the topics of “city responsiveness” and “neighborhoods” (referring to preservation and civic engagement issues) with five votes each. Advance publicity for the event suggested housing might be key, as organizers noted concerns about figures estimates from the citywide planning process Envision Cambridge that under current zoning there will be 20,800 more Cantabrigians by 2030, and certain zoning changes could raise that to 24,300. That bigger figure is a 21.5 percent increase over the current 113,000 population, and its 12,300 residential units added to the current 44,000 is growth of 28 percent.

Also participating were citywide organizations focused on housing, including A Better Cambridge, which circulated a pamphlet about the city’s “Affordable Housing Zoning Overlay” with data about equitable distribution of affordable housing units throughout the neighborhoods. The Port has the highest amount of the city’s affordable housing units at 34.5 percent, the group noted, while West Cambridge has the least at 1.3 percent

The two-hour forum, held at the Citywide Senior Center across from City Hall, drew upward of 150 people – including five city councillors – as drawn together by the the Livable Cambridge discussion group and organizers shared with the Harvard Square Neighborhood Association, including Suzanne Preston Blier. Ahead of the forum, Blier said its key moments would be when participating groups presented three to four issues each considers vital for a more livable Cambridge, which could be used to prioritize politically.

“We all share many of the same concerns,” Blier said, “and we believe that by working together not only will our citizens have a stronger voice, but Cambridge itself will be stronger.”

The forum was laid out job-fair fashion, with neighborhood associations hosting tables with fliers boosting causes – groups from the Cambridge Highlands and East Cambridge, for instance, served up a stark flier opposing a proposed Eversource power substation at Fulkerson Street. Refreshments were close by.

The meeting kicked off with HSNA member Nicola A. Williams speaking briefly to the desire for socioeconomic, ethnic, cultural and age diversity in the city and asking all to join her in the mantra that “all opinions are valued” and a reminder to “respect differences.” Blier, a preservation activist and architectural historian, ran through a slideshow illuminating the surveyed goals for a “Livable Cambridge” from the approximately dozen neighborhood associations in attendance. Affordability, sustainability and the need for more green open space were highlights. 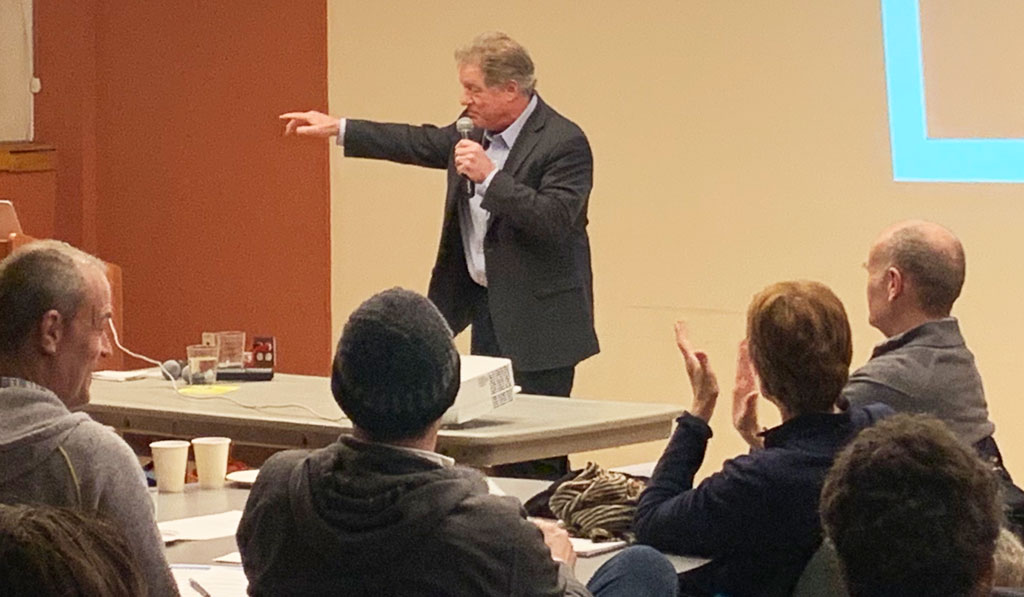 About an hour in, representatives from the neighborhood associations were summoned to talk about their organizations and goals; the Cambridgeport Neighborhood Association seized the opportunity to announce that its Thursday meeting would discuss congestion and noise from the Boston University Bridge rotary, which worsened with completion of the Commonwealth Avenue Bridge project in August.

A brief audience Q&A focused on affordability, inclusion and high rents, residential and commercial, with the tripling of rent that shuttered Crema Cafe in Harvard Square still a raw wound.“Development can’t be market driven,” speakers said several times. Transportation was another major topic of conversation; trees and the diminishing tree canopy – the top polled priority of the neighborhood groups – registered a distant third in the conversation.

Not quite the end

Comedian and former candidate for lieutenant governor Jimmy Tingle spoke to close the event, and people filed out abuzz, with some wondering what had been accomplished. (Organizers referred to the Saturday forum as “setting the table for more interaction and discussion.”)

The event’s meaning remained somewhat open to interpretation. In a follow-up discussion online Sunday, Blier underlined that there was “a big message [in] this input and insight from current residents in our different neighborhoods” – but where some heard a conversation still dominated by the need for affordable housing that suggests the need for more development, she saw an answer to “the city … moving willy-nilly in the Envision effort to upzone to add more and higher developments for commerce and for housing.”

“Note climate and overdevelopment are at the top,” she said, pointing to the formal tallies of issues from neighborhood groups.

This post was updated Jan. 13, 2019, to correct the date of a Cambridgeport Neighborhood Association meeting.