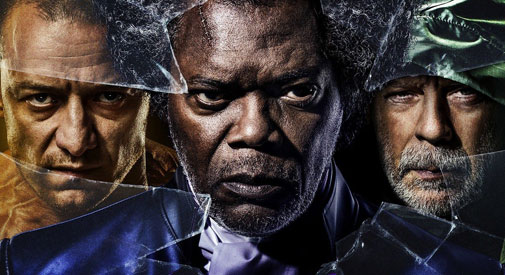 Back in 2008 I just about threw in the towel on M. Night Shyamalan after the pointless “The Happening” made its way to the big screen. Never before had something so deadly but mysterious (was it the trees?) seemed so silly and inane – “Bird Box,” similar in concept, is a massive step up by comparison. “Signs” (2002) and “The Village” (2004) were big finale-twist flicks that tried too hard to emulate the skillful sleight of hand that Shyamalan’s classic “The Sixth Sense” did in 1999, but the artifice was obvious too early. “The Visit” (2015) resurrected my faith. It was something different, a horror-in-the-woods psychological thriller B movie with “American Gothic” granddad and grandma as class A homicidal nuts with warm smiles on their faces and cups of cider in their hands. “Split” (2016) seemed another quirky turn for Shyamalan akin to “The Visit,” as it focused on a disturbed young man (James McAvoy) who takes young women hostages, horrifies and fascinates them with his 20 or so personalities and ultimately mutilates them with a superhuman persona known as The Beast (both a physiological and psychological transformation). It felt like an intriguing one-off driven by a fantastic performance by McAvoy, showing range and humor you suspected he had but had yet to see – but wait, what’s that at the end? A tie back to Shyamalan’s 2000 superhero-among-us flick, “Unbreakable.” 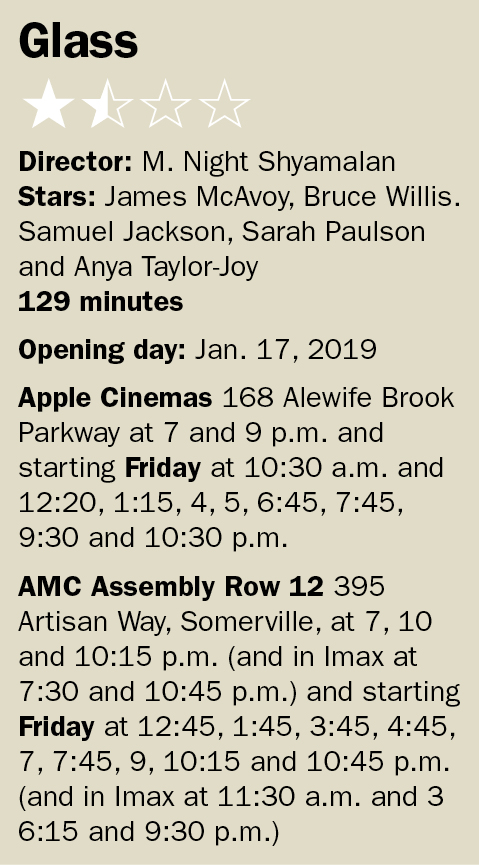 If you missed “Split” but are a fan of “Unbreakable” I can give you the green light to proceed here and see “Glass” without hesitation. Bruce Willis is back as David, Philly’s working-class man of steel who, as the lone survivor of a massive train wreck, is somehow able to fall from great heights without a scratch. He’s still lurking on the streets in his green rain poncho, doing minor bouts of vigilante good and pissing off the police. Samuel L. Jackson, as the evil mastermind who blew up the train in “Unbreakable,” reprises his title character, Mr. Glass. It’s a nice reunion, but what do these rivals have to do with McAvoy’s Kevin Wendell Crumb? Well, Glass has been incarcerated in an asylum and drugged up for 19 years, while David, investigating a slew of cheerleader massacres, susses out the Beast & Co., nabbing him on the cusp of his next slaughter; for the effort, he and The Beast end up with Glass in the ridiculously low-security asylum. Enter Dr. Ellie Staple (Sarah Paulson) who for some reason has three days to convince the trio that their superhuman skills are delusions – and then, it’s implied, they all get to go free? Cockamamie convolution to be sure, but Glass, more obsessed with comic books and superhero history than Kevin Smith, believes his arch-villain magnum opus will be to break David and The Beast out and have them wage battle on the new Osaka skyscraper towering above the Philly skyline. (I kept thinking Nakatomi Plaza, more a lingering effect from my repeated Christmas viewings of “Die Hard” than Willis’ presence.)

There’s more to the too-long-to-get-to-the-point buildup than I care to explain, including the fact David has a son (Spencer Treat Clark) and that one of the survivors from “Split” (Anya Taylor-Joy) shows up; while they’re fine, they only add more stumbling blocks to an already clunky confluence. (I never got why Willis’ David always wore that vinyl rain poncho. To hide his identity? A thick vinyl rain jacked is a sauna, and too flimsy and vision-obstructing for real combat.) It’s not that “Glass” doesn’t entertain, but it does so mostly on the performance by McAvoy and, to a lesser extent, Jackson and Paulson, who’s not given much to work with. Willis strangely mumbles his through the film and never raises a brow above nonchalance, even when David first encounters The Beast. The most eye-catching of all is Shyamalan, who in a brief Hitchcock insertion makes Quentin Tarantino look like Peter Finch – “stilted” is the word. The film wraps with what’s supposed to be a cathartic coming together, but even that, orchestrated in a Philly train terminal with folks having a universal iPhone epiphany, makes about as much sense as the whispering trees in “The Happening.”