Denmark is opening a Cambridge branch of its Innovation Centres – beginning, like so many startups, within the Cambridge Innovation Center – to put its own industries in dialogue with the area’s concentration of pharmaceutical, artificial intelligence and renewable energy knowledge.

The Danes’ innovation center is expected to grow to up to eight people by mid-2019, said science attache and consul Torben Orla Nielsen, who has been in Cambridge for around a month paving the way for additional staff and a Jan. 27-30 visit by Tommy Ahlers, an entrepreneur and investor and the nation’s minister of higher education and science. At that time, they may look to relocate from incubator space in 101 Main St. in Kendall Square to larger CIC offices, including on Milk Street in Boston – but Nielsen doubts they’ll want to cross the river.

From the CIC in Kendall Square, “I can walk to offices for 18 of the world’s top pharmaceutical companies,” he said. “That’s unique. You can find that nowhere else globally.” 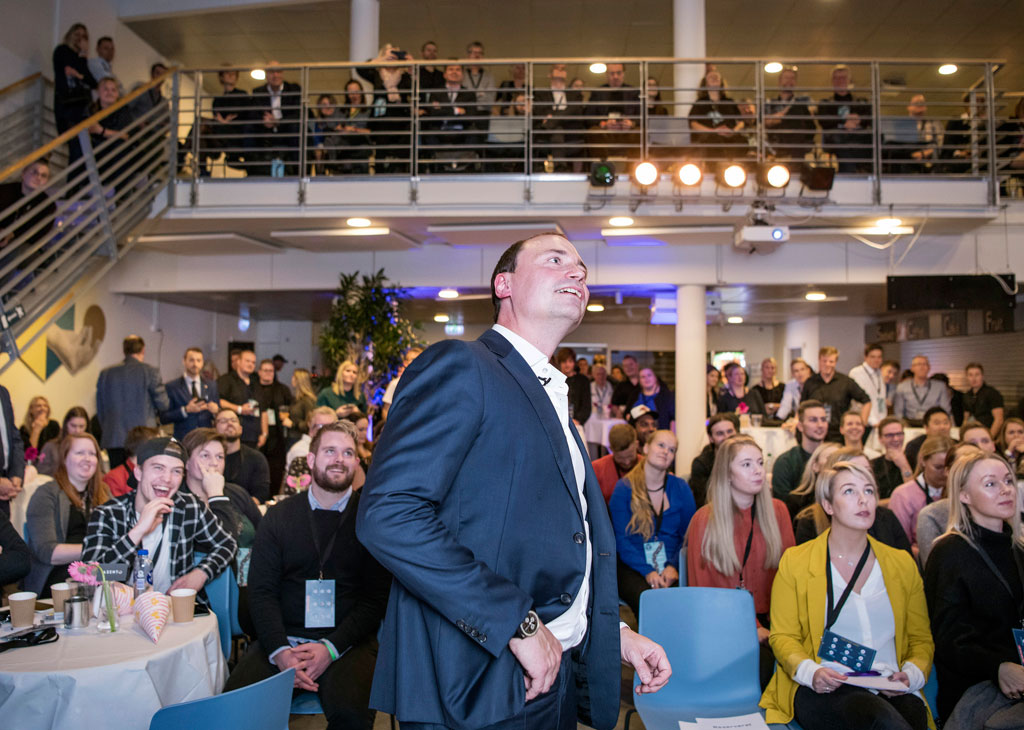 Entrepreneur and investor Tommy Ahlers, the Danish minister of higher education and science, at a public debate about flexible education in Denmark. (Photo: Britt Hafstrøm Johnsen)

The access is crucial, especially in the early days when “there are so many people [to meet] on my agenda,” Nielsen said. “Part of my job now is to knock on doors.”

If Denmark’s innovation center sounds familiar, it’s because Cambridge is already host to Swissnex, at 420 Broadway in Mid-Cambridge, a concept similar in execution – but as an outpost for Switzerland, another European nation looking to stay ahead of the curve in technology. The Swedes and Danes overlap elsewhere too: “I have been working at Seoul in Korea, where there is also a Swissnex. They are good colleagues,” Nielsen said. “Where it makes sense, we’ve done some projects together.”

Denmark began its innovation center programs in California’s Silicon Valley in 2006; Cambridge will be the eighth, alone costing about $1.5 million annually, Nielsen estimated. That’s a small part of the $45 million Denmark’s government has set aside on a mission to develop technologies, but the centers also create revenue by serving as paid consultants to Danish companies.

Ahlers’ visit will focus on artificial intelligence, with visits already scheduled to Boston Scientific, the Massachusetts Institute of Technology tech fund called The Engine and its Stephen A. Schwarzman College of Computing, which hosts the Quest for Intelligence program. Ahlers will also take part in a panel discussion about robot technology and AI with stakeholders arranged by Invest in Denmark and meet with students from Harvard’s Kennedy School of Government, said Pernille Schultz Kjær, a Danish embassy publicist.

“The business potential in new technologies like AI are enormous, but new challenges and dividing lines will follow,” she said. “It is important for Denmark always to be one step ahead in a legal and ethical sense, to secure a responsible use of AI.”

Nielsen said Ahlers’ visit would provide another opportunity to visit a fast favorite of his: the Catalyst restaurant in Kendall Square, where Nielsen was excited to find a floor manager and chef de cuisine had recently been to Copenhagen and managed to get seats at Noma, four times voted best restaurant in the world on the “World’s 50 Best” list (but not on the list now; it recently reopened after closing for one year).

Catalyst is “excellent,” Nielsen said. “We will take the minister when he is here.”