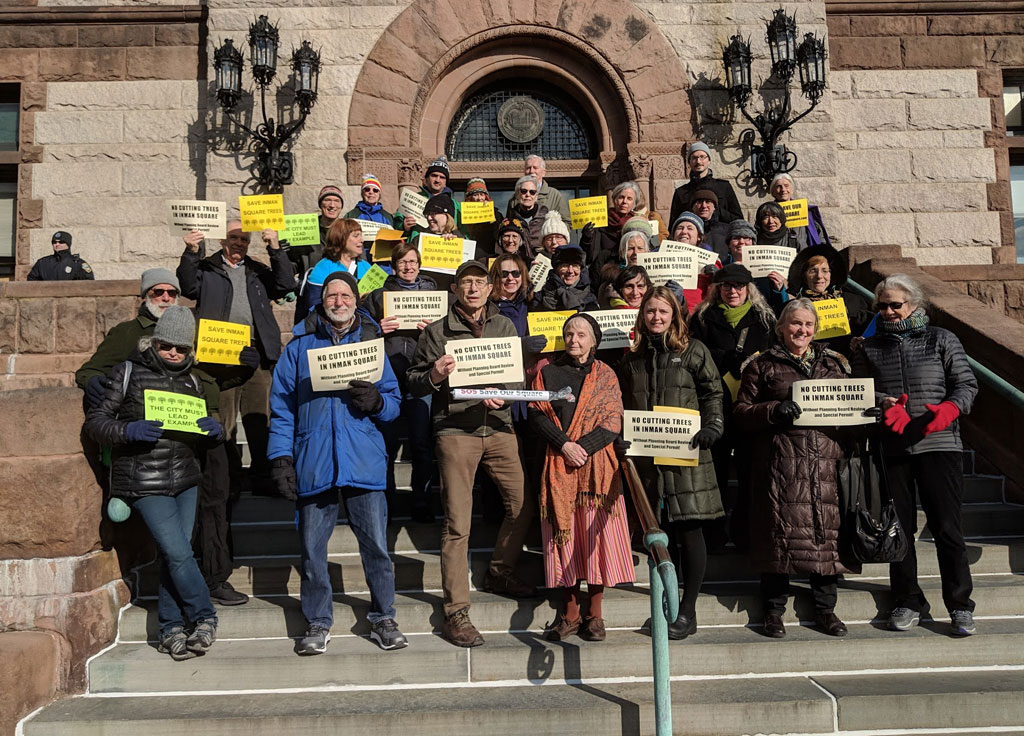 Work on an Inman Square redesign is back on, with the city planning tree removals starting early Wednesday. Residents opposing the plan and loss of trees have preliminary plans to be there to greet the workers with a protest.

A leader of the Friends of Inman Square group, John Pitkin, is trying to file an emergency stoppage today with the Board of Zoning Appeal, said Jonathan Harris, another group leader.

“They should not proceed,” Harris said, referring to city work in Inman Square.

Five members of the Friends of Inman Square met Jan. 22 with the city manager, winning a pause of uncertain length before reconstruction of the square began so the city’s Law Department could confirm whether work can go forward without a special permit. The citizens group believes the square’s Vellucci Plaza and its trees are zoned as open space, and that city zoning law doesn’t allow relocating a street into open space without review by the Planning Board and Board of Zoning Appeal that results in a special permit.

But the pause was short-lived, and Pitkin learned Monday night that the city rejected the group’s analysis. Notifications went out at 7 a.m. Tuesday that as soon as 7 a.m. Wednesday, work would begin taking out Vellucci Plaza’s four mature honey locust trees; birch trees in raised granite planters there are to be removed for replanting at Danehy Park.

“The city says it doesn’t need a permit to lay out a road through public space. Our lawyer says they do. It will have to be adjudicated,” Harris said.

A petition against the changes now includes 314 resident signatures, 118 of which are from Inman Square residents, as well as 14 Inman Square businesses, the group said. The petition is backed by a unanimous vote of the Mid-Cambridge Neighborhood Association. A Jan. 16 rally inside City Hall was attended by 40 to 50 people, getting DePasquale’s attention and the resulting meeting and legal analysis.

The redesign process began with a council order in June 2014, sparking at least the fourth intensive look at a redesign since 1994. The two-year, $7 million change to Inman Square would split Vellucci Plaza in two, bending Hampshire Street through it to make an awkward, elongated intersection with Cambridge Street safer – essentially by turning it into two intersections. But opponents say the changes are not safer, and they oppose the destruction of four 50-year-old honey locust trees resulting from changes at the plaza.

Lee Gianetti, director of communications and community relations for the city, was contacted Tuesday for comment.