‘Piercing’: He only thinks he called in a victim, but she’s his adversary in a psychopathic game 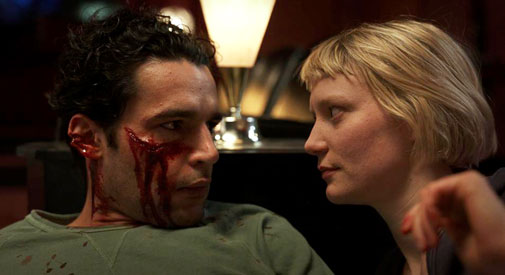 ‘Piercing’: He only thinks he called in a victim, but she’s his adversary in a psychopathic game

Nicolas Pesce’s “Piercing” unfurls a wild psychosexual thriller rife with S&M depravity and bloody parlor games. It’ll likely be compared to the macabre works of Chan-wook Park (“Oldboy,” 2003) and Takashi Miike’s “Audition” (1999), and fairly so: Miike’s bloody mating game was based on a novel by Ryû Murakami, who is also behind the material in “Piercing,” though Pesce’s followup to his equally eerie debut, “The Eyes of My Mother” (2016), isn’t quite as visceral. “Piercing” is sleek and stylish, like its posh hotel setting, but the blood-soaked cat-and-mouse between the two mains lacks motive, and doesn’t quite resonate. 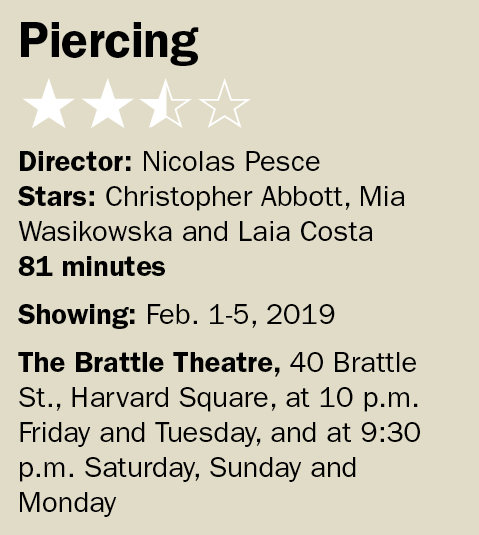 We begin with a father (Christopher Abbott) hovering over an infant with an icepick – yeah, the piercing here is not goth, but more aligned with Sharon Stone’s foxy femme fatale in “Basic Instinct.” “You know what we have to do, right?” the baby says, or at least it does in the father’s head, à la Son of Sam. Reed kisses his wife and child goodbye and sets off on a faux business trip to that swank hotel, where he arranges for a call girl and goes about the careful choreography of a murder, including the feature act with an icepick, hacking up the body and the tough task of severing the head – all with grim audio effects by Pesce as a prelude of what’s to come. Or maybe not.

The statuesque call girl, Jackie (Mia Wasikowska, from Tim Burton’s “Alice in Wonderland” and Park’s “Stoker”) has a few skeletons in her closet as well. When Reed check on her in the cavernous bathroom, she’s piercing herself with a pair of scissors – plans upended. After a trip to the hospital, after Reed readjusts on the belief Jackie might offer herself up sacrificially, things flip and Reed finds himself bound and tied. Back and forth the evening goes, drugs, oozing open wounds and visions of past victims filling the frame. There’s a haunting zoom-in of someone in a gimp mask having sex with a gagged woman who, if not Reed’s wife (Laia Costa), is a dead ringer.

Wasikowska pulls off the role of Jackie convincingly, adding some demonic spin without going over the top. Abbott is weak tea by comparison, unable to match Wasikowska’s rising intensity; a bravura performance like Christian Bale’s in “American Psycho” (2000) is demanded here, but not delivered. It’s not all on Abbott’s shoulders, however; Reed is never fleshed out – we never really understand the need to bleed others, and those calls back home to discuss how the plan is coming along befuddle when they should beguile and revile. Still, scrumptious framing and intimate intrigue carry “Piercing” boldly forward, pick in hand drawing the viewer’s wincing eye.