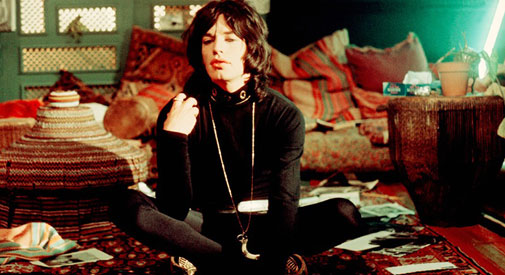 The Brattle runs a short but potent program this weekend remembering the life and works of director Nicolas Roeg, who passed away in November. Roeg, best known for “The Man Who Fell to Earth” (1976) starring David Bowie as a stranded and vulnerable space alien, took flight first as a cinematographer and shot many of his own early works. His eye and keen framing are essential to the heightened mood and intrigue of many of the offerings appearing at the Brattle. 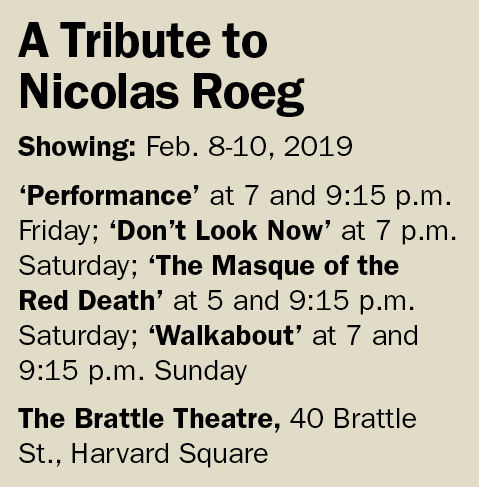 Of 16 films by Roeg, the Brattle will showcase three early works as well as Roger Corman’s 1964 cinematic adaptation of Edgar Allan Poe’s “The Masque of the Red Death,” starring Vincent Price as the lascivious and paranoid prince – Roeg provides the camera work. The three Roeg-helmed works on the slate: “Performance” (1970), “Walkabout” (1971) and “Don’t Look Now” (1973), a trio that could whimsically be classified as pop, peril and outré.

Bowie wasn’t the only rock star to work with Roeg; “Performance,” co-directed by the free-wheeling Donald Cammell (“Demon Seed”), starred Rolling Stones frontman Mick Jagger as a reclusive rock star held up in a manse with his girlfriend (Anita Pallenberg) and a notorious gangster (James Fox). Hallucinogenic drug trips, mind games and identity swaps propel the psychedelic psychodrama – alluringly so, up to the gonzo, doesn’t-quite-make-sense-but-okay conclusion. Jagger’s role of Turner was based allegedly in part on recently deceased Rolling Stones founder and former Pallenberg lover, Brian Jones. Cammell, the son of a shipping family, painter and a notorious partier, came up with the conceit. Pallenberg at the time of the filming was dating Jagger’s bandmate, Keith Richards, who allegedly became so incensed by the love scene between Jagger and Pallenberg he refused to play on the soundtrack song “Memo from Turner,” which the Stones were set to record (slide guitar master Ry Cooder filled in).

“Walkabout” marks one of Roeg’s more complete and affecting films. It’s a more grounded and visceral affair than “Performance” and something of a massive changeup, as it tails a teenage girl and her younger brother (Jenny Agutter, who would go on to star in “Logan’s Run,” and Roeg’s son, Luc) lost in the Australian outback. Luckily they latch on to a young aborigine (David Gulpilil) on an ordained quest to achieve manhood. The suicide that precedes the desert stranding, the rife sexual tension between young man and ripening female who don’t speak the same language and the mirage-tinged imagery shot by Roeg present a perverse, primitive and poetic palette.

With the death of Bernardo Bertolucci recently too, much has been made of that now infamous sex scene in “The Last Tango in Paris” (1972) for which the actress Maria Schneider said she was kept disturbingly in the dark. The other most-talked-about such scene of the early ’70s was in Roeg’s “Don’t Look Now,” when a grieving husband and wife (Donald Sutherland and Julie Christie) convene in a graphically filmed carnal connection that is at once erotically electric and deeply emotionally felt. The couple have come to Venice in part to recover from the haunting loss of their young daughter. Sutherland’s husband, an art historian on assignment, keeps seeing the image of his red-hooded daughter among the city’s misty canals and dark alleyways. There’s also a string of unsolved murders, and a blind woman keeps telling Christie’s character that she can put her in touch with her daughter. The psychodrama, tinged with beyond-the-grave intrigue, is based on the story by Daphne du Maurier, whose works “Rebecca” and “The Birds” inspired other movies. Sutherland and Christie deliver palpable and nuanced performances, and the imagery shot and assembled by Roeg bring the film to eerie and visceral heights.

Many of Roeg’s later films – none on the docket – that mostly starred his wife, Theresa Russell, were far less critically successful (“Eureka,” “Bad Timing” and “Track 29”), with the standout being “The Witches” (1990) a Roald Dahl adaptation starring Anjelica Huston as the covenant head. Roeg, as much as he tried, never really rediscovered his trippy and experimental roots, but the path he blazed remains riveting, bold and legendary.

The films run Friday to Saturday. For details and tickets, visit the Brattle’s redesigned website.