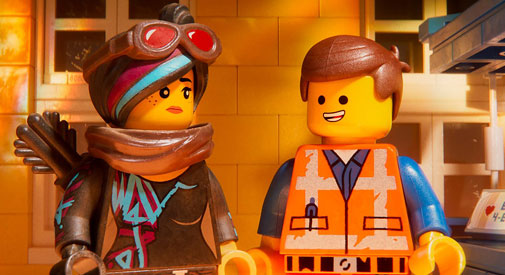 The pieces are all there, but they all don’t snap together like last time. The 2014 “The Lego Movie” was so sharp and fresh, full of wit that appealed to young and old, marvelous movie references and a world reimagined in a way no one thought possible – even a Lego sea. It was “Toy Story,” but revolutionary in vision, style and delivery. 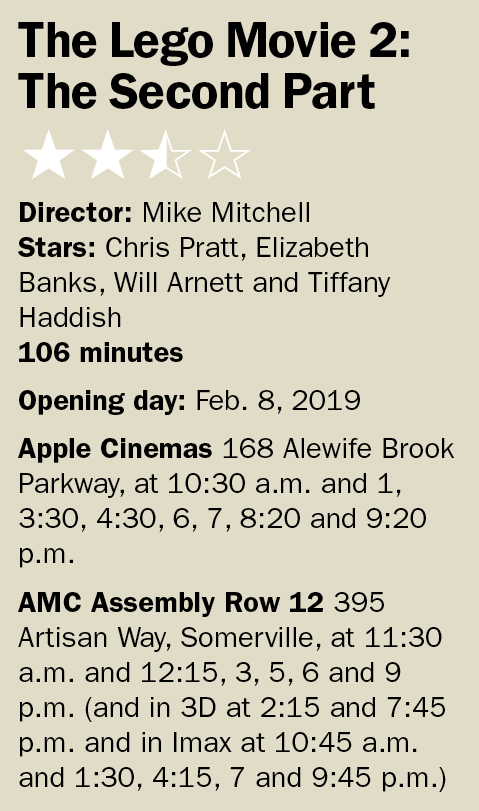 The director-writer tandem of “The Lego Movie,” Phil Lord and Christopher Miller (they were most recently involved penning “Spider-Man: Into the Spider-Verse”), remain part of the writing crew for “The Lego Movie 2: The Second Part,” but Mike Mitchell has taken the director’s seat. We’d left Emmett (Chris Pratt) and sassy love interest Lucy, with the saucy moniker of Wyldstyle (Elizabeth Banks), in a Lego utopia; it is now a wasteland evocative of “The Planet of the Apes,” with a half-crumbled Statue of Liberty at the center and a “Mad Max” barrenness all around. Alien Lego beings have come and blasted the happiness all to hell. There’s malaise and a small oasis and things seem to be getting slowly put back together, until Lucy and a few others are abducted by Queen Watevra Wa’Nabi, a shape-shifting, duplicitously motormouthed charm-arella voiced by Tiffany Haddish. Emmett, finding his inner hero, turns his happy home into a spaceship and sets off to save his crew.

That inner can-do actually manifests itself physically, in the form of Rex Dangervest (Pratt pulling double duty), a rough-and-tumble space traveler who pulls Emmett from certain destruction amid a meteor field and signs on for the “Star Wars”-like quest to rescue the princess from the impregnable palace – refer to Kurosawa’s “The Hidden Fortress” for origins and blueprint. Pratt’s Rex, spoofing on Pratt’s dino wrangler from the “Jurassic World” flicks, helms a spaceship crewed by communicative raptors. It’s funny for a second. As is much of the rest of the film. The gritty irreverence and punchiness of the last film is greatly diminished, though, feeling snapped on and borrowing heavily from the “Toy Story” plot device of toy owner Andy getting on in years. Getting old is hard on toys and plastic bricks, as well as on humans.

As with the last “Lego” film, the funny centerpiece is the growling, constipated-sounding Batman (Will Arnett). In a cheeky sendup, there’s a run-through of all the actors that played The Bat onscreen, from Michael Keaton to Christian Bale (homeboy Ben Affleck is in there too). There’s just not enough of that good stuff to make part two stick the way the first one did. The animation is just as visually stunning, but in the end it’s just pieces of its former self.

Don’t get me wrong, “The Lego Movie 2” is a great way for kids to pass a cold winter day, but adults won’t be grinning cheek to cheek the way they did back in ’14.