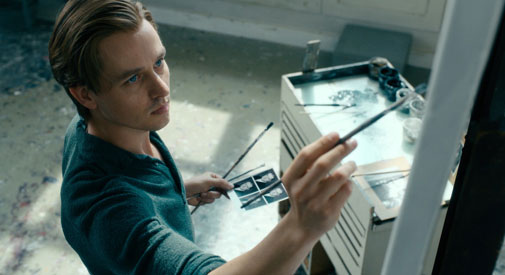 The German Best Foreign Language Film nominee for the Oscars, “Never Look Away” has stiff competition coming at it next weekend from “Capernaum” (Lebanon), “Cold War” (Poland), “Roma” (Mexico) and “Shoplifters” (Japan) – films that crowned many Top 10s last year regardless of language, begging the question: Is it worthy to be in such a distinguished field,  arguably the best in years? 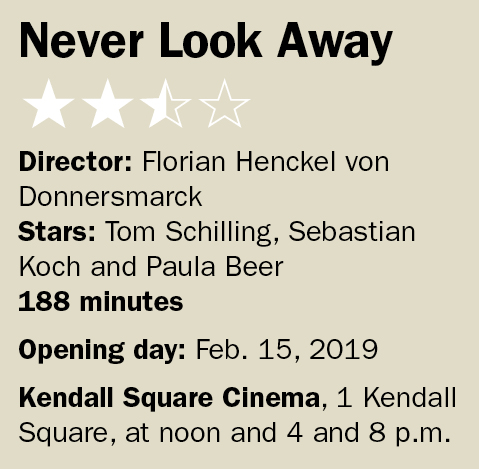 Well, yes and no. It’s a stirring cinematic achievement, gorgeously shot, well-acted and peppered with piquant daubs of erotica, but at three-plus hours and with a slightly mawkish protagonist, “Never Look Away” never gets into your bones the way its competitors do. A fictionalized account of abstract artist Gerhard Richter’s life, the film – as most biopics do – begins with the stand-in youth, Kurt (Cai Cohrs) growing up in Dresden in the 1930s and living through the infamous Dresden firebombing, which, when rendered onscreen, is itself grandly reimagined through an abstract lens. Long before the catastrophic event, however, in a telling setup, the wide-eyed Kurt is taken to an art gallery by his eccentric and comely aunt Elizabeth (Saskia Rosendahl). A Nazi guide promptly demeans and dismisses the works of foreign greats such as Picasso, but it’s during the visit that Kurt discoveries his inner passion to paint, and his aunt, who often parades around the house nude, instructs him: “Everything that is true is beautiful” and therefore he should “never look away.”

It doesn’t take long to realize that Elizabeth’s free-spiritedness is mental illness. Kurt’s parents, at a loss after a far too stark incident, place her in a sanitarium, where on the eve of the air raid she’s gassed by the hospital’s director Carl Seeband (Sebastian Koch, reminiscent of a young Bruno Ganz – though with a stronger chin and steelier gaze). Depressing indeed, but where there is fire there is rebirth.

The film, directed by Florian Henckel von Donnersmarck, who notched an Oscar for his 2006 contemplation on the devious impact of the Stasi turning citizens against each other in “The Lives of Others” (which also starred Koch), postures the ambition of an epic – it certainly has the historical scope and running time of one. After the bombing we lurch forward to a postwar Kurt, now a young man (played by the dewy-eyed, handsome Tom Schilling), diligently painting away at an art school. It’s there that he falls for a fellow student named Ellie (Paula Beer), who oddly (or poetically) enough happens to be a dead ringer for Elizabeth. She’s also the daughter of Koch’s hospital director. Yes, you can see miles away where the karma connection is going, the kind of fate you’d find in a Greek tragedy in which the players are unaware of their position as the gods – or in this case, the director – move them around to suit their purpose.

The cast has ardor, especially Beer and Koch, but the script by von Donnersmarck can’t match it. The restrictions of the biopic-shaped arc can take some blame. (Richter, apprised of being the inspiration for the story, has expressed disdain, flagging it as a gross exaggeration.) No matter, it’s rewarding to see von Donnersmarck return to form after the 2010 debacle  “The Tourist,” a mindless thriller that paired Johnny Depp with Angelina Jolie and somehow made the result sexless and dull, even pulling Julian Fellowes (“Downton Abbey”) to Hollywood hack level. Here von Donnersmarck artfully concocts a dreamy rewind of how war and shifting circumstance can afflict the passionate. Fellow nominee “Cold War” covers a similar swath of time; the last act of “Never Look Away” even unfurls with the erection of one of the greatest of all Cold War icons, the wall between East and West.