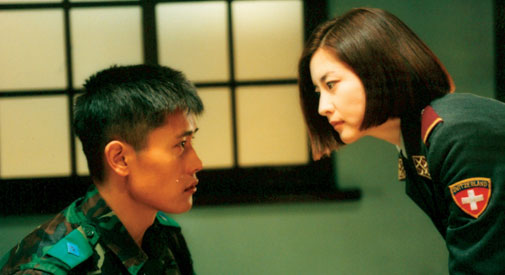 Chan-wook Park, probably forever known for his stylistic revenge drama “Oldboy” (2003), gets a mini retrospective and a fete at the Harvard Film Archive this weekend and early next week. In that seminal film, the widescreen, dioramic shot of the film’s protagonist hacking his way methodically through a teeming mob of henchmen with a hammer remains up there with such iconic cinematic impressions as “Rosebud” falling from Kane’s lips, the transition shot of the bone into the spaceship in “2001: A Space Odyssey,” the shower scene in “Psycho” and the long tracking shot that opens Robert Altman’s “The Player.”

On Friday, as part of the series tagged as “Two History Lessons,” the Harvard Film Archive will screen “Joint Security Area A.K.A JSA” (“Gongdong gyeongbi guyeok JSA”), which raised Park to notoriety in in his homeland of Korea in 2000. It’s timely given our president entertaining the North Korean dictator in Vietnam, as it revolves around the urgent investigation of the mysterious death of two North Korean DMZ guards and a South Korean soldier who’s immediately under suspicion. The film’s hard to come by, and if you’re a Park fan, this is an opportunity to not be missed – including one for this guy.

On Saturday, Park’s last feature film and my favorite of 2016, “The Handmaiden,” gets a screening. The film fits perfectly into the program’s theme, as Park plays with long-simmering tensions between Korea and Japan as he transposes Sarah Waters’ “Fingersmith,” a Victorian-era feminist romance, to Japan-occupied Korea in the 1930s. A pull from my review at the time – “It holds its rapturous tease over us with scrumptious visuals, artful poise and dips into kink and gore that would give the Marquis de Sade reason to smile” – should be all you need to know that this may be for a different palate, but is definitely a Park film.

Then on Tuesday, in coordination with a course Carter Eckert and Alexander Zahlten are teaching this semester on “Frames in Time: Korean Cinema as History and Filmmaking,” Park will be on hand at the HFA to have a conversation about the two films, their reflection on history and more. Park’s latest credits are six episodes of “The Little Drummer Girl” on AMC; the futuristic “Second Born” is queued up, and maybe, finally, “The Ax” also. The latter, one can guess, is likely to have some action akin to that hammer in “Oldboy.”