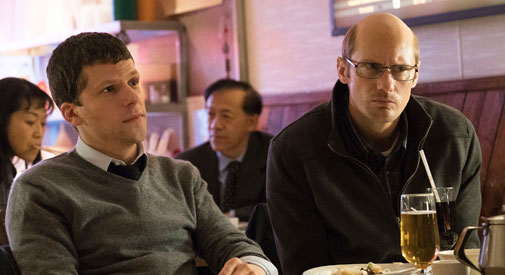 “The Hummingbird Project” is an odd duck. It flaps its wings wildly and squawks with more garbled vehemence than the Aflac pitch fowl. The cheeky title refers to the millisecond it takes a hummingbird’s wing to beat – and, in the context of the film, the advantage a new fiber-optic cable will give a pair of working-class cousins from New York to make a killing trading faster than anyone else on Wall Street. Who knew market timing came down to fractions of slivers of a second? 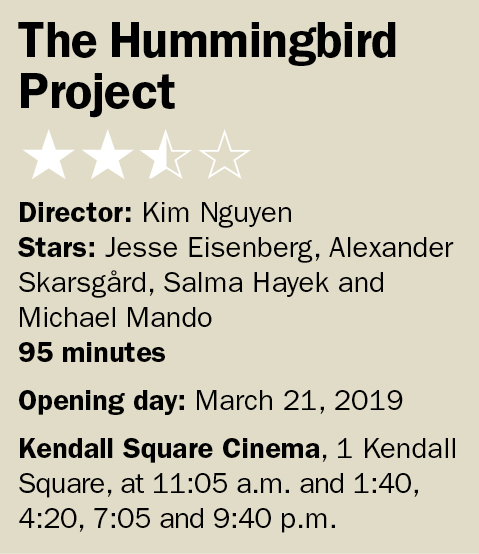 “The Wolf of Wall Street” (2013) this is not. The task at hand – to run a cable coast to coast by buying up mega bits of small swaths of land – just seems tedious and arduous on paper, let alone the actual doing of such.

But the casting of Jesse Eisenberg as hustling idealist Vincent Zaleski and Alexander Skarsgård as his volatile coding cousin Anton, who can take down entire grids from a prison phone, is a great boost. Of course, Eisenberg, who cut his teeth as an enterprising bore with baggage in “The Social Network” (2010), does well to retap his young Zuckerberg’s fire and arrogance. Skarsgård, at times a scene-stealing madman near blowing his cap into hyperbole, holds Anton just under the line perfectly. I can’t say the two have great chemistry, but they are compelling when in conflict and even more alluring when wrestling with issues on their own.

The duo sets off on the venture surreptitiously, but the tension ratchets up when a former employer (a fiery Selma Hayek) and rival databank company compete. She’s no fool, and the Amish want nothing to do with the technology-pushing Russian Jews from New York, no matter how many hundreds of thousands of dollars they offer. Blasting through the densely compressed bedrock of the Badlands ultimately becomes the easiest ground to gain.

If anyone caught “Halt and Catch Fire,” the fictional AMC series about the race to make the first commercial PC, that’s a fairly decent comparison if you mix in a healthy dose of avarice and demonic drive from “There Will Be Blood” (2007). This cable-laying curio nearly goes over the cliff – literally – but stays aloft thanks to the two lead performers and writer/director Kim Nguyen, winner of the 2012 Best Foreign Language Film for “War Witch.” He has a determined hand that makes it flutter with palpable intrigue and wonderment.