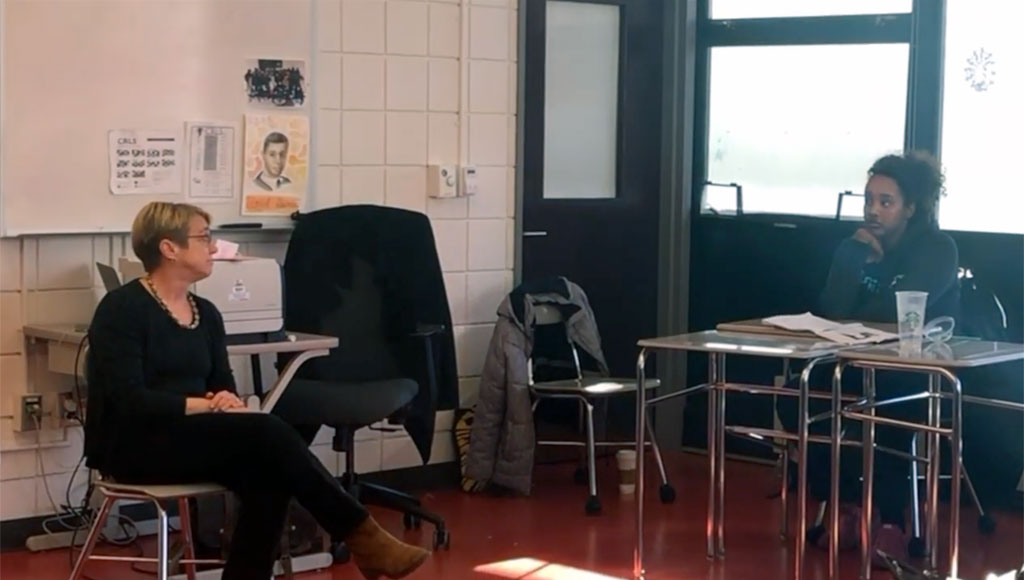 In a screenshot from a video posted for a few hours online last week, School Committee member Emily Dexter talks Jan. 17 with a student at Cambridge Rindge and Latin School.

A video recapping the issues and controversy surrounding use of the N-word on school computers and by a School Committee member appeared briefly on YouTube on Wednesday before being taken down – perhaps permanently.

The half-hour video, by Cambridge Rindge and Latin School history teacher Kevin Dua and his Black Student Union, raised questions “about whether appropriate consent was granted to release portions of the videotaped material publicly,” according to a letter to the high school community from district superintendent Kenneth Salim.

It was “agreed to take it down while we seek a solution that will be legally compliant and will meet the criteria established in district policy,” Salim said, explaining that he had asked high school principal Damon Smith to help arrange a meeting with students creators “to apologize for the lack of timely communication with them about the district and School Committee response to this incident and discuss the important concerns they raised. We will also be speaking with them about the reasons that we had to request that the video be taken down.”

That wasn’t going to happen, Dua said in his own letter.

“Understandably so – due to the short notice, frustration on the students’ work removal and the [schoolwide] email – the meeting request was declined,” Dua wrote.

Dua ran a Jan. 10 classroom panel discussion about racial slurs, the Internet and filters that Cambridge Public Schools installs on its student Chromebooks and Web networks, which students said keep them from academic exploration of controversial topics. School Committee members Emily Dexter and Laurance Kimbrough attended, along with Salim, and Dexter – who is white – made the point that students get a filtered version of reality in various ways. But in talking about where and how the N-word appears, in one instance she used the full term.

When students expressed upset about use of the term by a white person, Dexter went back to Dua’s class Jan. 17 to discuss it, but the visit went poorly, with Dexter taking an abstract, professorial approach rather than apologizing directly, at one point telling the students that, although she was “genuinely sorry,” it was possible that someone in her position would not be genuinely sorry, while if she were in their situation, “I probably would not believe somebody coming forward today and saying they were genuinely sorry.”

The conceptual angle was more confusing and provocative than it was calming. “The way you’re going about it feels very disrespectful,” one student told her, amid seeming general discontent.

In a statement released Monday, Dexter reiterated that her use of the term was a mistake and said, “I apologize again, particularly to the students.”

The committee approved an investigation Feb. 5 and returned to the topic April 2 to amend that to becoming an “objective fact-finding review” to be conducted by an attorney. A school official indicated this month that an attorney had been found.

One goal was to get student voices on record before school ends for the year June 18; some of those voices appear in the video. In addition to clips from Dexter’s visit Jan. 17, when students address her directly, they are seeing reflecting in April on how “the point of the project was lost” amid the controversy. The classroom conversation noted that beyond the technological ban on racial terms, the filters blocked terms such as “uterus” and didn’t allow students to stream music while they worked.

Students say in the video that they got no updates on the situation, and meanwhile were being portrayed as “crying about everything and overreacting over someone using the word.”

“In February, the School Committee decided to investigate whether my utterance violated anti-discrimination policies. Facing such a serious inquiry, I unfortunately had to hire legal counsel. The School Committee subsequently changed the investigation to a fact-finding review to be completed by the end of the school year. That review will begin shortly, and I hope it will be thorough and objective. Unfortunately, the issue of Internet filters has been eclipsed. I share the students’ frustration that their concerns have not yet been addressed. They articulated those concerns in a YouTube video they produced, which, while highly selective in its excerpts of the classroom discussion, allows their voices to be heard. I admire their passion and remain hopeful that a good educational outcome that respects the students’ interests can still be achieved, and before the school year ends.”

Seen in the video

The video provides historical context for the racial terms, with archival discussion by the author James Baldwin and more contemporaneous moments with Randall Kennedy, who’s written an entire book on the subject. There are clips from “Real Time With Bill Maher,” scans of antique (and offensive) cartoons and plenty of video of students at the high school. For many members of the public, it would have been the first chance to see for themselves Dexter using the term and her unpopular approach during the follow-up visit to the class.

The Jan. 10 discussion itself had a provocative title that used the full “N-word,” and so does the video, on its title card. It does not show Dua – who is black – using the term in full, as he was said to several times before Dexter followed, once.

The video shows no perceptible change in the mood of the room at or after Dexter’s use of the term. Within the frame of the phone filming the event, students seem unaffected, if not distracted by other things, and neither Salim nor Kimbrough seem to react. Kimbrough, who is black, has said he did not find the use of the term offensive within the context of the discussion; he has cited Kennedy’s differentiation between “quoting” the term and “using” the term as an attack – a distinction Kennedy himself went on to make in a Boston Globe essay.

The final moments of the video show a disclaimer that all material in it was covered by law as “fair use,” meaning it doesn’t infringe copyright because of its use “for purposes such as criticism, comment, news reporting, teaching … scholarship or research,” and because it’s used in a way that doesn’t affect the value of the copyrighted work.

An email to Dua seeking comment was sent Sunday.