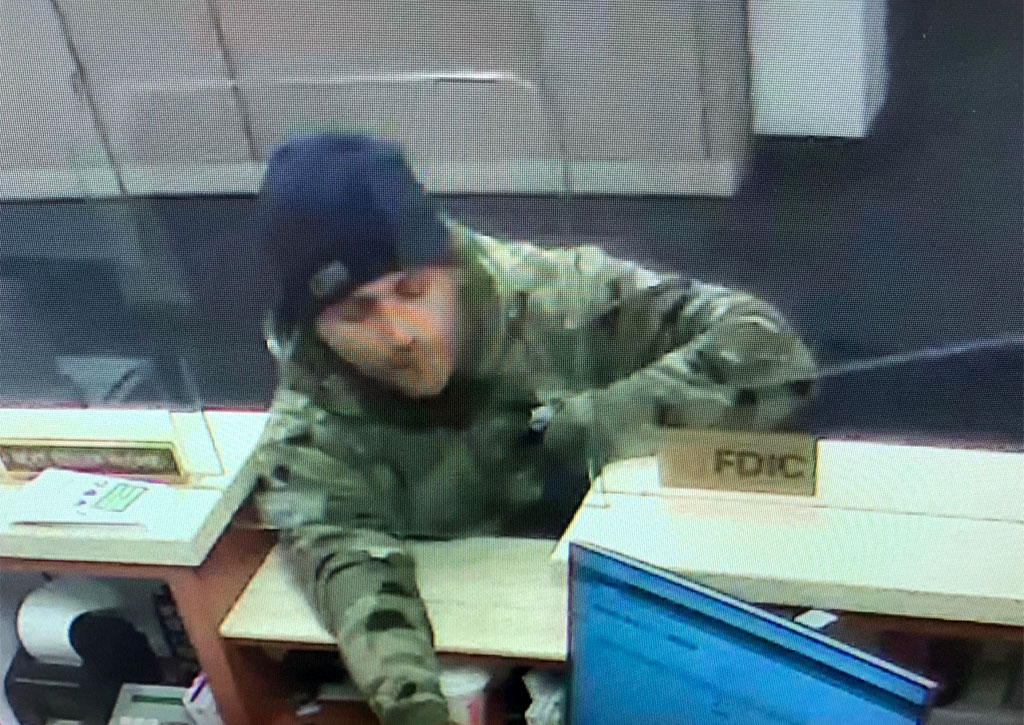 A scene from a May 1 bank robbery in Davis Square, in an image released by Somerville police.

A Rhode Island man was arrested and charged Thursday in federal court in Boston in connection with an armed bank robbery in Somerville on May that resulted in shots fired, state police said.

Daniel Rosado, 32, of Providence, Rhode Island, was charged with one count of armed bank robbery, one count of brandishing and discharging a firearm during a crime of violence and one count of being a felon in possession of a firearm. Rosado will appear in federal court in Boston.

“Today’s arrest and charges put an end to a three week search for a dangerous and reckless individual,” U.S. Attorney Andrew E. Lelling said. “No one should feel afraid to do the everyday, basic American errands we all need to do. But on May 1, it’s alleged that one man callously threatened the lives of dozens of innocent people who were doing just that. By not just brandishing, but actually discharging his weapon – twice – the alleged defendant instilled fear and endangered the lives of members of our community for his own greed and selfishness. My office is committed to prosecuting violent individuals to the fullest extent of the law.”

According to the charging document, on May 1, a man later identified as Rosado entered the Middlesex Federal Savings Bank in Davis Square, Somerville, brandished a handgun, fired a shot into the ceiling, and pointed the firearm at customers and bank employees. It is alleged that Rosado yelled: “Get down!”; “Everybody on the ground!”; “Second drawer, hurry up!”; and “Give me money or I’ll shoot!” Customers and bank employees laid on the floor, while the robber approached a teller window, threw a backpack at the teller and demanded money.

While the teller filled the backpack with money, a customer left the bank and flagged down a marked police cruiser occupied by a uniformed Somerville police officer. The officer entered the bank, pointed his gun at the robber and ordered him to freeze. In response, it is alleged that Rosado faced the officer, pointed his gun in the officer’s direction and fired one shot. The officer shot back. During the exchange of gunfire, Rosado left the bank and fled on foot, and the officer chased after him.

As Rosado fled down College Avenue, a bystander, noticing that Rosado was being pursued by a police officer, tried to tackle Rosado, which caused Rosado to drop his backpack. Rosado kept running, and witnesses eventually lost sight of him.

“Violent acts, such as the one which took place on the morning of May 1, 2019, here in Somerville, recklessly endanger the lives of the public and the police,” Somerville Police Chief David Fallon said.

Law enforcement found a Webley revolver loaded with four unfired rounds of ammunition in the backpack, as well as two cartridge casings and more than $500.

Forensic analysis of the backpack, linked the DNA profile found on the backpack to Rosado. A subsequent review of Rosado’s driver’s license photo matched the images of the robber captured on video surveillance at Middlesex Bank.

According to court records, Rosado has prior felony convictions including negligent operation of a motor vehicle, larceny from a person and witness intimidation and assault by means of a dangerous weapon. That means Rosado is prohibited from possessing a firearm or ammunition.