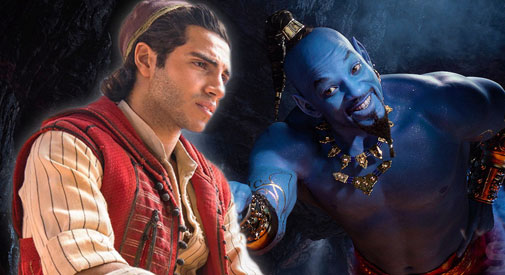 There’s no denying that “Aladdin,” updated in live action form by Guy Ritchie (“The Man From U.N.C.L.E,” “Sherlock Holmes”) intends to entertain. From spectacular set pieces to colors that threaten to overwhelm the screen to dance numbers that give the old classic Disney tunes a modernized lift, Ritchie and his team want us to leave the theater wowed and dizzied by the visuals that begin to flourish once our street rat finds himself in the “Cave of Wonders.” But live action can’t do everything animation can, even with CGI, especially when the eye behind the camera is overly cautious. When Ritchie lets go, “Aladdin” comes alive; but it always appears as if the creative team is stopping itself from going too big. 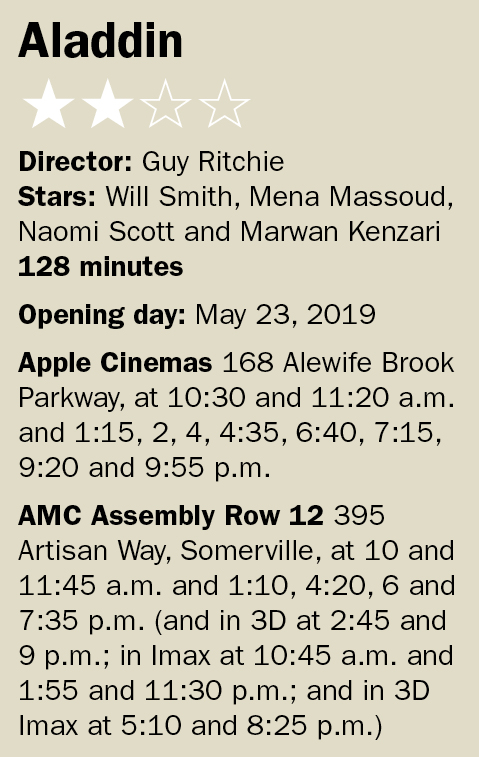 The story is one we know from the 1992 original, with Aladdin (Mena Massoud) committing petty thievery to stay alive as he runs into a disguised Princess Jasmine (Naomi Scott). The two bond over their shared love for their home, Agrabah, leading Aladdin to meet Jafar (Marwan Kenzari), who looks to take control of the country and invade bordering lands. After a heist gone astray for a magic lamp, Aladdin also meets the Genie (Will Smith), enlivening the film instantly as the two try to secure Aladdin a place in Jasmine’s life.

While the first act spends too much time on setup, the second delivers on the best version of itself – snappy and witty, allowing its stars to shine bright as mayhem is laid out across the screen in show-stopping musical numbers. It’s everything “Aladdin” should be, including unapologetically hokey and vividly bombastic. We don’t watch musicals for realism, but for escape, and here we’re swept up into the dreaminess of this world, lifted away like our leads on their magical, cloud-bound carpet.

Our eyes are well fed with the abundance of colors – hot pinks and teals, lush golds and deep purples spill through the frames in beautifully rendered costuming by Michael Wilkinson – granting a level of authenticity to a world by filmmakers who are trying to inject a larger-than-life sense of wonder while also staying grounded in a world where we await some frustratingly delayed more operatic moments. The only place where the sense of realism works to the filmmakers’ benefit is in set design, which eschews Disney’s recent trend of using blocky, cheap CGI.

The original score by Alan Menken holds up, and “A Whole New World” induces the same level of gleeful chills, though some songs, such as “Friend Like Me,” fail to deliver because of muddy execution. Smith was always facing an uphill battle when it came to following Robin Williams’ portrayal as the Genie, and while he’s energetic and charismatic for most of the film, “Friend Like Me” just can’t translate without a specific type of mania.

Scott and Massoud are perfectly cast as Jasmine and Aladdin. Scott possesses a regality, while Massoud’s roguish charm steals scenes with comedic flair – an update of the character enabled by its actor. Smith, as noted, has the most difficult job to do, but does so with a world-weariness and cynicism that finds this Genie familiar in dialogue and actions but different enough in delivery to set himself apart from Williams’ version.

There’s no end in sight when it comes to Disney’s gluttonous need to wring every ounce of revenue out of its big, mouse-eared vault, with “live-action” adaptations of “The Lion King,” “Mulan” and “The Little Mermaid” all in some state of development. With that in mind, the least the film division can do is not rely too heavily on the nostalgia tied to these well-loved tales, a reliance that leads to products such as the 2017 live-action “Beauty and the Beast,” an eyesore and weak echo of its animated self, rather than a “Cinderella” – which fine-tuned the magic of the 2D 1950s classic with some 2015 character adjustments to help modernize it for new viewers. Ritchie’s “Aladdin” falls closer to the latter camp, but not without some rather large stumbles along the way (including some sloppy updates of tropes that were archaic at the time of the original release). The greatest failure of this “Aladdin” is that, like our blue-dipped Genie, it possesses incredible power but fumbles it, playing too safe when every beat, specifically every musical one, should have dazzled.