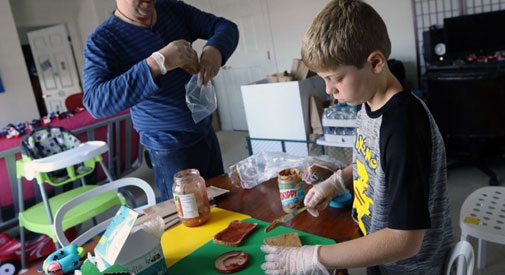 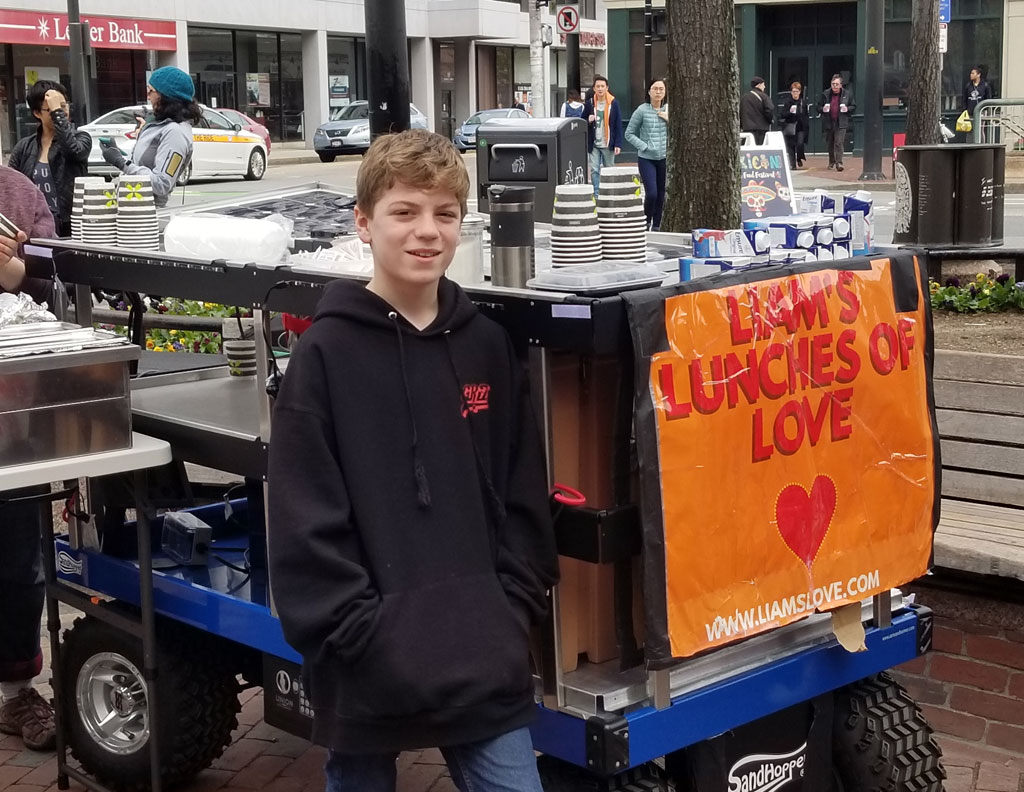 This week, 12-year-old Liam Hannon speaks before a worldwide gathering of top brass from GoFundMe, the for-profit crowdsourcing platform that hosts charitable causes and promotes do-gooders. Liam, a Central Square resident who’s become something of a celebrity for providing free lunches to the hungry and homeless each weekend, will be one of the “young heroes” attending the internal conference in San Diego to share his mission, success and vision – and beyond his years, boy, does the kid has vision.

A sixth-grader at the Putnam Avenue Upper School who is quiet and introspective beyond his years, Liam has served more than 4,000 free lunches to the hungry in the three years since launching Liam’s Lunches of Love. Inspired by his father Scott’s journey to Standing Rock, North Dakota, to protest a pipeline being sent though Native American lands, he started the venture with just 20 lunches packed into a small wagon. “I was nervous,” Liam said.“I didn’t have to be nervous, because they were thankful.” 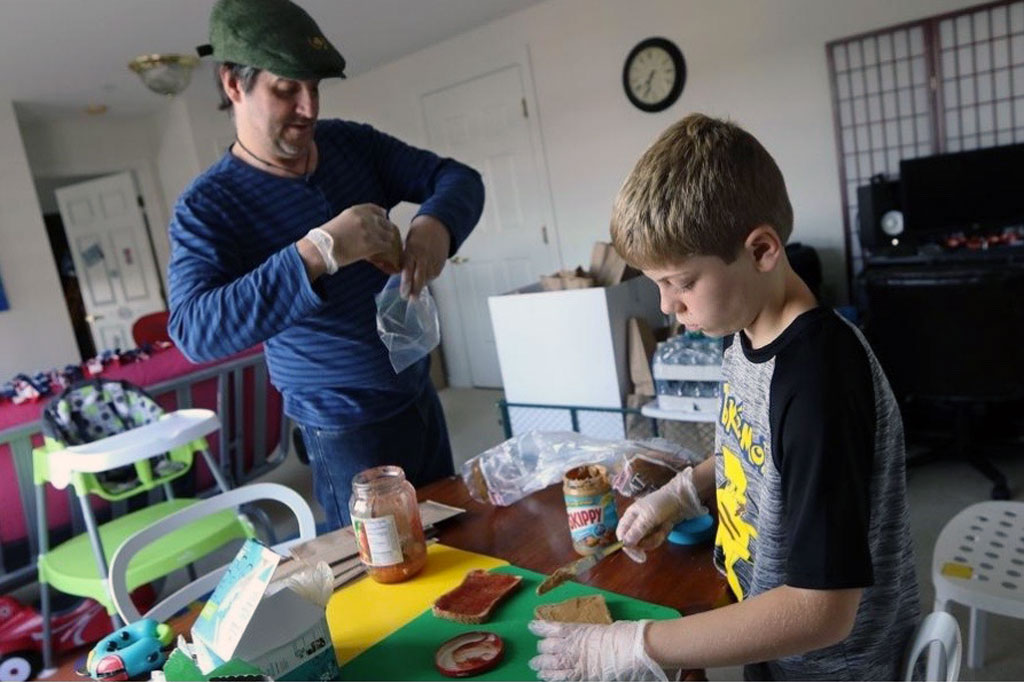 Almost every Sunday, Liam and Scott Hannon spend two hours preparing and packaging the meals before setting out to Central Square’s Carl Barron Plaza and, subject to time and logistics, making their way up to the Cambridge Common. “Never,” said Scott Hannon of those they serve, “has any of them ever asked us for money. Never.” The Hannons describe the project as being “judgment free.” 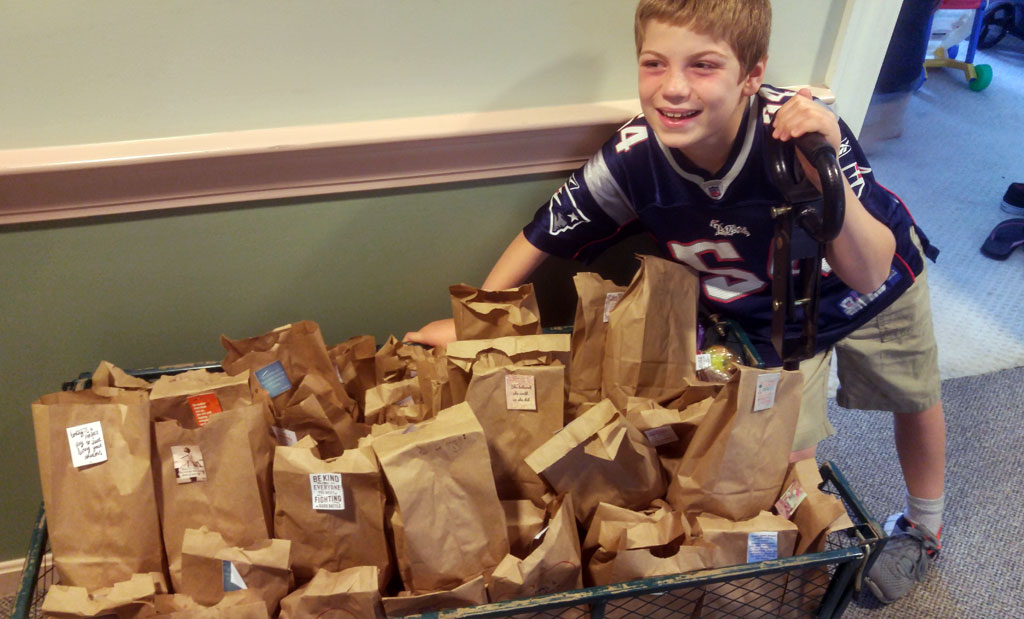 The lunches evolved into more easily mass-produced hot meals such as mac and cheese, soups and pasta. Because the cost of the lunches runs over $200 per weekly offering, Liam and his dad eventually launched a GoFundMe campaign. One of the early requests was for “a bigger wagon,” which pulled in a few hundred dollars. But awareness of Liam’s mission grew – Liam, who shuns the spotlight, has become the subject of media attention, including an award presented to him by actor John C. Reilly and Anderson Cooper nationally on CNN as well as local TV blurbs, a featured spot on a GoFundMe podcast and an appearance at a Celtics game – and the purse for Liam’s Lunches of Love skyrocketed to several tens of thousands of dollars.

A bit of help comes from GoFundMe itself, a company representative said. “We do this on a regular basis as part of our internal GivesBack program where every week, employees nominate a GoFundMe campaign that touches their heart, and if selected, a donation is made to that campaign,” the spokesperson said.

“Any time we get the opportunity to meet these extraordinary people in person, we not only welcome it, but look forward to it. These are the people who make all of us excited to come to work each and every day,” the spokesperson said. “We’re excited that one of our GoFundMe Kid Heroes will be spending time with our employees as we bring our GivesBack program to life.”

Asked about his classmates and the exposure he has received, Liam said, “Some of them help out, but most don’t really know about it. I don’t really talk about it.”

Liam sees his project growing even more. To that end, one goal he’s shooting for is the ultimate bigger wagon: a food truck. The father and son imagine free meals for the needy, quality food for pay for those who have means and jobs for those who need them.  “I want to stick with the model of going to them,” Liam said.