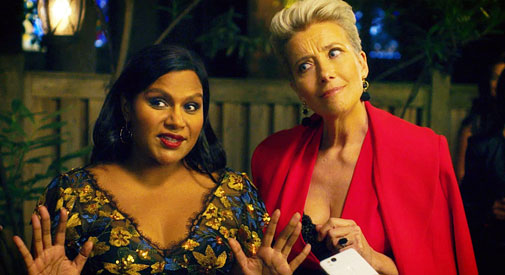 For a wispy-light, sitcom-ish comedy with some dark edges, “Late Night” covers a lot while getting guffaws and even some well-earned, teary-eyed moments. Lurking in the wings are the specter of Trump and #MeToo; more upfront are issues of white privilege, diversity hiring, ageism and sex scandals as “Late Night” takes us into the drama unfurling behind the scenes of late night TV. 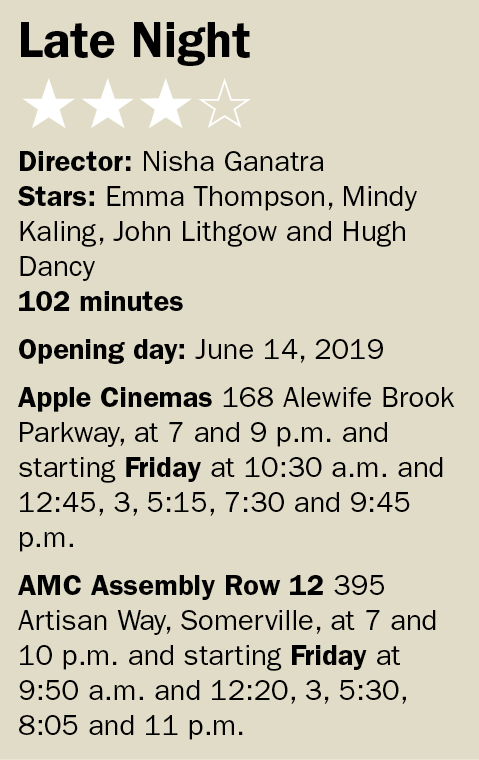 The film benefits from an agile script by locally reared Mindy Kaling (“The Office” and “The Mindy Project”), no stranger to issues of race or trying to hold a show together as a woman. The other galvanizing infinity stone here – and there are “Avengers” jokes, I promise – is the chemistry between Kaling as a chemical plant engineer turned comedy writer and Emma Thompson as the notorious queen of mean of late night TV. Her Katherine Newbury, the lone female face of late night, is both menacing and engrossing, something of an improbable hodgepodge of Johnny Carson, Anna Wintour and Leona Helmsley. Ever in glamorous pantsuits and sporting a frosty cropped do, Katherine’s held her spot for decades, but recent years of poor ratings from her shunning of millennials, social issues and social media has the brass (Amy Ryan, great in small strokes as a “Network”-esque TV exec) considering a replacement. It doesn’t help that the show’s phalanx of writers are all white men, working obsequiously within the confines of their star’s narrow construct.

One such writer with a second child on the way asks for a raise and is fired – Katherine, while married (John Lithgow gives a nuanced and compassionate performance as her husband) does not have children, having poured herself into her show, and demands the same devotion from her staff. Desperate, and against her better instincts (she leans toward “national treasures” such as Doris Kearns Goodwin, while Jimmy Fallon slays her in the ratings by washing a sheepdog with “Avengers” star Robert Downey Jr.), Katherine books a YouTube sensation – a sassy female comedian whose MO is to sniff her dog’s butt. “What could go wrong?” The next move is to bring in a woman of color. Enter Molly (Kaling), who wins a corporate essay contest. Turns out the parent company that owns the chemical plant also owns the network (shades of GE and NBC). Yup, it’s that kind of light “dreams come true” fantasy, totally forgivable considering the smartly portrayed friction that ensues.

The delivery of “Late Night” overall is fairly predictable, with audience-cued reactions. Thompson is riveting throughout, and sure to be in this year’s Oscars conversations; she holds it all together, especially when her Katherine moves beyond commanding and demanding for a few vulnerable moments. Kaling’s Molly rides along in her wake, and together the two conjure up something akin to what Anne Hathaway and Meryl Streep did in “The Devil Wears Prada” (2006). Together they make “Late Night” a sweet, serviceable fairy tale with a crisp acrid bite.