It’s Hollywood on Hollywood in ‘Play it Cool,’ series on Wednesdays at Somerville Theatre 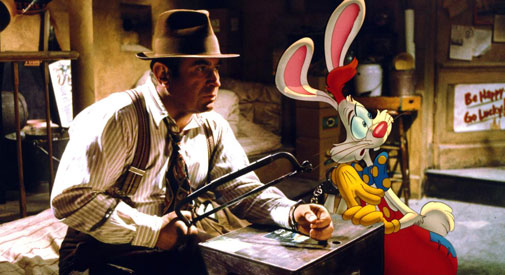 It’s Hollywood on Hollywood in ‘Play it Cool,’ series on Wednesdays at Somerville Theatre

In anticipation of the July 26 opening of Quentin Tarantino’s “Once Upon a Time … in Hollywood,” the Somerville Theatre is running “Play it Cool,” a 35mm repertory series chock full of films about Hollywood on Hollywood. The series kicks off tonight with “Who Framed Roger Rabbit” (1988), Robert Zemeckis’ groundbreaking blend of looney toon animation and live action. The film might best be described at Bugs Bunny NC-17 as a dick (the indelible Bob Hoskins) seeks to prove a cartoon rabbit’s innocence. The film will be introduced by creator Gary K. Wolf.

Other classic staples on the slate include “Sunset Boulevard” (July 3), the 1950 classic staring William Holden as a washed-up actor, Gloria Swanson as the delusional and domineering former movie star holding his reins and Erich von Stroheim as a fictional film director named Max von Mayerling (hmm) and  Cecil B. DeMille as himself – quite meta and tragic, indeed. The pairing of comedic spoofs “Get Shorty” (1995) and “Tropic Thunder” (2008) on July 10 is a devilish delight, both featuring ensembles that are hard to imagine as the Hollywood machine is upended by gangsters and rebel armies (which the cast and crew of a film project think are staged) – and the sight of Tom Cruise with a bad combover is worth the price of admission alone. On July 17, things get darker again with a pair of noirish classics, Vincente Minnelli’s “The Bad and the Beautiful” (1952) with Kirk Douglas as a power-abusing movie producer and Robert Aldrich’s “The Big Knife” (1955) starring Jack Palance as an actor forced into a criminal coverup; Ida Lupino costars. Dealing with the life of stuntmen, there’s Burt Reynolds and Sally Field in “Hooper” (1978) and the great Peter O’Toole as a demanding director in “The Stunt Man” (1980) where the latest action fabricator (Steve Railsback) harbors a fugitive past. The films play July 24.

After the opening of Tarantino’s deconstructive weave inside Hollywood, the series concludes Aug. 28 with a pair of films directed by Robert Altman and starring Elliot Gould: “California Split” (1974) and “M*A*S*H” (1970). Why? Because Elliot’s so cool.