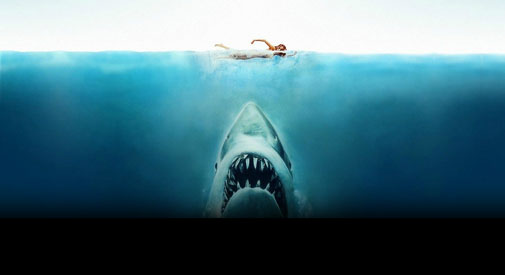 School’s out, summer’s here and to that end, The Brattle Theatre, playing perfectly on our fears and desires, serves up the devilishly conceived “Just When You Thought It Was Safe to Go On Vacation Again” series, where those seeking solace and relaxation away from home get more than they bargained for. (It’s the perfect lead-in to “Midsommar,” Ari Aster’s follow up to “Hereditary” opening July 3.) The weeklong program, which begins Friday and concludes July 4, bookends with two Steven Spielberg classics: “Jurassic Park” (1993) and “Jaws” (1975), which defined the standard for what would become known as the cinematic blockbuster. When you think about it, there’s little distinction between the two, which both feature a prehistoric carnivore with chainsaw chops terrorizing humans who get in their way (or in their wake, as you might have it); each is based on a best-selling book by a hot author; the terrors unfold on islands; and each boasts an indelible score by Boston conductor John Williams – the difference being that the threats come one if by land and two if by sea.

Following the prehistoric park parable, Saturday brings a double dose from Jordan Peele: the genre-pushing race fable “Get Out” (2017) and “Us,” one of the best films of the year so far; this is a good opportunity to catch it in its rightful presentation if you missed it earlier on the big screen. If you’re a fan of “The Talented Mr. Ripley” (1999), one of the many cinematic takes on Patricia Highsmith’s alluring American sociopath, there’s “Purple Noon” (1960) directed by René Clément and starring swoony French idol-to-be Alain Delon in the Tom Ripley role. The languorous but chilling rendition is easily the best of the lot (other versions include “Ripley’s Game” starring John Malkovich in 2002 and “The American Friend,” directed by Wim Wenders in 1977) and illustrates the subtle genius of Clément, who remains underappreciated. (If the film fuels your fire, catch Clément’s “Rider on the Rain,” the 1970 thriller staring Charles Bronson at the height of his virile mystique.) “Noon” plays Sunday and is paired aptly with Michelangelo Antonioni‘s mystery-cum-love triangle, “L’Avventura” also made in 1960, set on the same seas and starring a commanding Monica Vitti.

On the goofier side, there’s the cult geek-out “One Crazy Summer” (1986) staring John Cusack, Demi Moore and Bobcat Goldthwait, as well as “Return of the Living Dead” (1985) a comedy spoof on George Romero’s classic zombie franchise – perhaps Jim Jarmusch should have taken notes from this before his recent miscue, “The Dead Don’t Die.” The slapstick pair play Wednesday. A rare nugget on the list is “With a Friend Like Harry” (2000), in which the titular character (Sergi López) proves to be more sociopath than old friend (playing Monday), and also on the slate is “Spring Breakers,” the Day-Glo gonzo tale of three coeds who trek to Florida and go gun crazy. Harmony Korine’s 2012 crossover film smartly played outside the lines, something his more recent effort this year, “The Beach Bum” totally threw to the wind. “Breakers” plays Tuesday. For a complete listing of films, time and tickets, visit the Brattle website.