‘Being Frank’: Hiding a whole second family, you’d think that by now he’d be a better dad 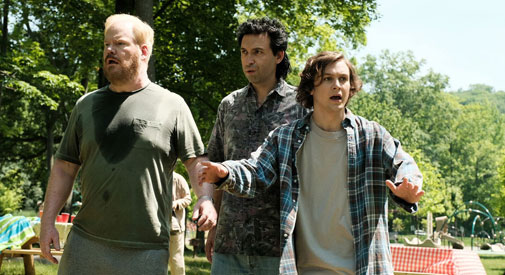 ‘Being Frank’: Hiding a whole second family, you’d think that by now he’d be a better dad

It’s a kid-eat-dad kind of a world out there in “Being Frank,” a duplicitous daddy comedy, but hey, sometimes dad doesn’t know best and might even deserve a bit of comeuppance. Set in the early ’90s (you can see cellphones and the Internet ruining some of the narrative ticks), Philip (Logan Miller from “Love Simon”) wants to attend art school in New York; dad (the aptly named Frank, played by comedian Jim Gaffigan) wants him to stick closer to their small-town home – “Stay in state,” he says. Frank himself is never around, always off on business trips to Japan for a ketchup company. In a mini act of rebellion, Phillip runs off during spring break to a nearby lakeside town where he learns dad’s not in Japan, but settling in with his second family. That’s right: Dad’s got big love and two well-seeded clans. Surprisingly, Phillip doesn’t blow the lid off the polygamous do-si-do, but instead uses it to get what he wants. He even helps Frank perpetuate the charade. 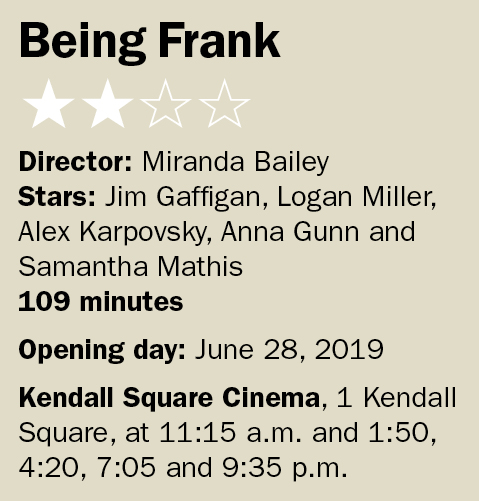 Directed by Miranda Bailey, whose credits as a producer include indie comedies that similarly go to places few would (“Swiss Army Man” and “The Diary of a Teenage Girl”), “Being Frank” in execution feels a bit staged and ham-fisted at times – think “Meatballs” if it tried to play it straight. Inconsistent lurches between romp comedy and soap opera melodrama detract as the plot noose tightens and the truth closes in on Frank. The one heartfelt light in all the household-shuffling madness (talk about multitasking) is the bond that forms between father and son. Granted, it’s not born from traditional roots such as golfing or an investment club, but at least it’s a common goal and the two forge a secret language to keep it all clicking along.

You can’t fault Bailey for going after such ripe comedic fruit, and Gaffigan goofs it up enough to make his lout empathetic, but overall “Being Frank” feels underdone – like some of the jokes and situational comedy needed to be hashed out more, or perhaps required a second or third take to get right. It’s worth acknowledging the supporting cast, which includes Samantha Mathis as one of the wives, Alex Karpovsky as Frank’s stoner buddy with gonzo suggestion and a sassy Isabelle Phillips as one of Frank’s daughters. They do their part to hold the leaky dramedy afloat.